Coming-of-age, social message, comment on media, con-men – Noor covers a lot of ground. Which might have been fine, if only it didn't start its sermon.

Sonakshi Sinha seems to be playing an all-in-one role here – the slapsticky comic relief, the “charging to make a difference” protagonist and the heroine. The film itself wants to do both – make a strong statement and appeal to the audience's funny bone – especially that of the younger generation.

While the Sonakshi-trying-hard-to-be-cute bits didn't amuse me at all, I am intrigued by what the writers have up their sleeves in terms of the challenges she faces after the conflict is exposed. I am hoping against hopes that it isn't just lip-service in the name of having a woman as the protagonist. At the very least, I hope all the slapstick is done with in the trailer and all the real meat of the story is left for the film.

Noor describes herself with a voiceover for nearly 20 minutes, if not more.

It is not that Noor starts out with a bang. Noor describes herself with a voiceover for nearly 20 minutes, if not more. She underlines the fact that she is young by using words like hashtag and followers. Sure, she is charmingly self-deprecating but it goes on for too long.

Fortunately, the writing is slightly deeper than the usual. Her character seems to be facing her own first world problems – she even referecnes Dear Zindagi - and she is suddenly shown the mirror and along with it the face of what would be “real” problems of the world. This happens seamlessly and is interwoven into her character from the beginning.

If only now the writers didn't lose steam and focus in the second half. Post-interval Noor – both the film and the character – sermonizes a bit much. The scenes which are supposed to be twists or impactful hold the drama a bit too long – you are given time to predict all eventualities. Thus, whatever comes next isn't the intended shock.

Suddenly, the movie drops from being a fair watch to just about tolerable. If it doesn't go further down, it is solely because of the performances. Very little feels like it is an act. Sonakshi Sinha feels like a Noor, a smart journalist who wants to make a difference in the world but also has everyday human issues that a urban girl would have. The rest of the cast supports her along well too. 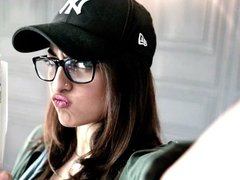 It is difficult to say if I'd have enjoyed Noor better if it were more focused on one or two aspects of life that it picked to comment on. The lectures in the second half were so full of themselves that it is a task to be objective about the film and imagining Noor without them.

Thumbs up, by Yugantika Sharma, Desi Martini : ... I am sure you would relate to anyone of the characters of this film because this movie has captured the basics of all of us. ... full review

Thumbs up, by Rachit Gupta, Filmfare : ...This film has some great ideas. Thankfully the dodgy execution and lack of depth in writing don’t spoil it all.... full review

Thumbs up, by Mayank Shekhar , MiD DAY : ...While I haven't read Saba Imtiaz's ‘Karachi You're Killing Me', the book this film is based on, you can tell the original text would be an enjoyable read. It's been adapted to screen and Mumbai by Ishita Moitra (Hello Ishita. Disclaimer: Friend!)... full review

Thumbs up, by Nihit Bhave, Times of India : ...Director Sunhil Sippy has achieved the rare feat of not stereotyping people in the media by showing them as jhola-toting opinionated creatures... full review

Thumbs up, by Subhash K Jha, Zee News : ...While Kannan Gill definitely needs elocution classes, Dandekar is delightfully saucy specially in the scene where she walks in to a bar to slap a man who has betrayed her best friend. ... full review

So-So, Bollywood Hungama : ... it’s the feisty Sonakshi Sinha who leads the film totally. She is extremely earnest in the portrayal of her character.... full review

So-So, by Sreeju Sudhakaran , Bollywood Life : ...The cinematography, while not capturing the essence of Mumbai as well as a Wake Up Sid or a Bluffmaster, is gorgeous, while the music by Amaal Malik is decent.... full review

So-So, by Dev Raj Gulati , Desi Martini : ...To me, woman emancipation can go through only when she's economically empowered and not by mere lofty ideals and a streak of feminism.... full review

So-So, by Samedha Arora , Desi Martini : ... Dear Noor I’m a journalism student as well and I don’t think my teachers would approve you of finding a story at 3pm, recording it at 4pm and then expecting your boss to break it 6pm... full review

So-So, by Zinia Bandyopadhyay, Desi Martini : ...It was really pleasant to see Sonakshi taking the film on her shoulders completely. ... full review

So-So, by Anna MM Vetticad, FirstPost : ...the makers of such films see women as a “trend”, not people (like men) with lives that are big-screen-worthy for all seasons...Noor, which too features Sinha in the lead, is thankfully about a story and a woman with a story worth telling... full review

So-So, by Johnson Thomas, Free Press Journal : ...There’s just too much of dialogue to contend with and that takes away from the entertaining onscreen spiel.... full review

So-So, by Manjusha Radhakrishnan , Gulf News : ...After the interval, the film unravels and the grasp that Sippy had earlier displayed on his subjects and his plot comes slightly unhinged... full review

So-So, Indicine : ...Noor is a film that starts off really well, and sets up a world which immediately sucks you in. But alas, it spits you out of its world soon after with some very weird story telling decisions. ... full review

So-So, by Joginder Tuteja, Movie Talkies : ...Even in the book, there were some rough edges (especially in the latter half) that had to be smoothened... full review

So-So, by Kunal Guha, Mumbai Mirror : ...But that's the overarching tone of the film — a lot of talk, and very little chalk.... full review

So-So, by Sukanya Verma, Rediff : ...In the midst of munching on Haldiram product placements and a demure depiction of an affair where a couple sleeps together but never locks lips, Noor’s professional ambition finally catches up with her. ... full review

So-So, by Rummana, yahoo! India : ...The film’s big message about responsible journalism is lost because at no point do you see any attempt at serious reporting.... full review

Thumbs down, by ROHIT BHATNAGAR, Deccan Chronicle : ...Purab Kohli is so charming that it is easy to fall in love with him. ... full review

Thumbs down, by Smitavkumar , Desi Martini : ...Noor, you're numbing me!... full review

Thumbs down, by Rahul Bharadwaj, Desi Martini : ...Sunhil Sippy , I am told directed his last movie 17 years ago before Noor and the lack of practice clearly shows. ... full review

Thumbs down, by Josh, fullhyd.com : ...But hypocrisy is no sin in Bollywood. We get by.... full review

Thumbs down, by Sweta Kaushal, Hindustan Times : ...While these anecdotes could have made for a hilarious, light-hearted movie, the misunderstanding of the profession in the film is appalling.... full review

Thumbs down, by Suhani Singh, india today : ...her wallowing in self-pity is annoying.... full review

Thumbs down, by Anish Mohanty , Kia Gia : ...Noor comes across as a relatable character initially but you fail to empathise with her after a point... full review

Thumbs down, by Surabhi Redkar , koimoi : ...Probably, this film could serve as a manual for journalists on ‘what not to do’ during an investigation.... full review

Thumbs down, by Uday Bhatia, Live Mint : ...I’m unsure whether the film is knowing or oblivious about Noor’s ineptitude at her job. ... full review

Thumbs down, by Saibal Chatterjee , NDTV : ...Had the film been just as mindful of its own flab, Noor would have been far less of a strain to watch. ... full review

Thumbs down, by Shomini Sen , News18.com : ...The scenes between Sinha and Gill are actually quite sweet and bring an instant smile to your face... full review

Thumbs down, by Rajeev Masand, News18.com : ...Sonakshi’s idea of conveying frustration is contorting her face in ways that would give Jim Carrey a complex.... full review

Thumbs down, by Manisha Lakhe, Now Running.com : ...The film is like a fancy Vanilla Latte you ordered that was brought to you with only foam and no coffee...... full review

Thumbs down, by Nandini Ramnath, Scroll.in : ...Sippy and cinematographer Keiko Nakahara showcase the pretty and the grungy parts of Mumbai without getting their feet dirty.... full review

Thumbs down, by Namrata Joshi, The Hindu : ...Patronising as it may sound the film should have remained about Noor and her relationships alone.... full review

Yay! Thumbs Up, by Noor Movie Songs Lyrics : Just go and Watch it only If you are interested for new stories and script.

Yay! Thumbs Up, by Stars Cue

Nay! Thumbs Down, by Fan

Noor is a nice movie and actress Sonakshi Sinha's acting is awesome.

Sonakshi Sinha starrer ‘Noor’ has been launched in theatres. Directed by Sunhil Sippy, The video relies on Pakistani author Saba Imtiaz’s novel Karachi, You’re killing Me! and follows an indian journalist-writer Noor’s misadventures and romantic lifestyle as she navigates her way through Mumbai.

Noor is your typical upper middle class next door neighbor from Mumbai. Yes, Mumbai is very important, because it is all about the ethos of Mumbai (in the book on which it is based it would most probably have been about Karachi).

Noor eats, drinks, wears, behaves like almost any of us. As a typical Mumbaikar, her life is hectic, even though she is not particularly doing anything other than interviewing weirdos in the name of serious journalism (!!!) Probably a comment in itself on how third grade the Indian (TV) media has become.

So we are made to walk along Noor in her day to day activities, and in her ambition to be a topnotch journalist by not covering glamorous stories but following weirdos. Weird as that may sound. In between all this hectic Mumbai life, we are exposed to the dirty side of the city - and how Noor fights her conscience and her peers to come up tops. All this though seems very unnatural - especially the last 15-20 minutes.

Performance wise, the film is predominantly on Sonakshi Sinha - probably not a single scene without her presence. Almost all the remaining cast are new faces (at least for me) - which helps in watching the film as there are no preconceived notions about the way they are going to be behave (unlike when we put stereotyped people in roles). The few shades of grey - were highly predictable - at least for me. No surprises then for guessing what is going to happen.

Fan has given this movie a Nay! Thumbs Down. Fan has posted 714 comments and has rated 200 movies. See Fan's page for more details.