Liam Neeson doing what he always seems to be doing, these days. Non-Stop can be non-stop thrills or non-stop silliness, depending on how you look at it.

Liam Neeson. Distressed, angry, racing against time. The thought of his daughter is invoked repeatedly. And yes, he kicks some serious backside.

Wait, no. I'm not talking about the next film in the Taken franchise. This one is all new; or at least, it claims to be. Liam Neeson, with a singularly boring name - Bill Marks - plays US Air Marshall with a drinking problem, because of the events of his past. Obviously, it has to the plane that he is on, which gets picked for some mid-air shenanigans by an unknown man with a mobile phone.

It is possible to enjoy Non-Stop, as long as you leave your brains the same place that you do, before watching, say, Chennai Express. It demands dollops of suspension of disbelief, and perhaps some love for one of the finest actors of his generation, to keep a straight face while watching the film. 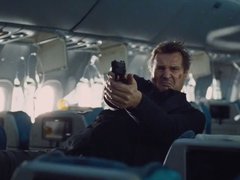 The plot is silly and far-fetched, and the execution is typical. The protagonist is introduced as a grieving loner, then an array of characters are shown, some with suspicious demeanors, so that we know who to keep an eye out for. Everyone knows how American security has become post 9/11, particularly regarding flights, so the tension mounts along any way.

Luckily enough, the film gives you no time to breathe as it sets up the plot and goes about trying to resolve it. The constricted plane setting is used well, which alternately gives you that claustrophobic feeling, without particularly getting monotonous in feel; after all, almost a hundred minutes of the film are spent inside the aircraft itself.

One of the annoying aspects of the film, however, is the writing and casting of the side characters. The stock, silent Muslim; the over-talkative African-American, the aggressive, well-built bald thug-type character; the scared child on the flight; and so many more - everything in the film is typical, without an ounce of originality.

Unsurprisingly, Neeson himself is the strongest thing about this enterprise. You'd think he'd be bored doing something he's done enough already, but he still manages to hold you while he is in the thick of the suspense. Julianne Moore is simply wasted, though. One of the other, minor points that I liked was the manner in which the text messages are styled in large font across the screen, when the characters send each other SMSes in the film. They were simple and elegant, in form as well as movement.

What you get, then, is a trade-off. You forsake logic and cinematic craft in favour of quick thrills, which the film has plenty of. You'll either be too busy trying to guess who Neeson is chasing, or you may sit back with the realisation that no matter what, Liam Neeson is having more fun than you are.

Although movie haven't shown anything new,,,,but the idea of keeping mystery of the person who exactly have hijacked the plan was really interesting,,,,,and that popping msg idea was great......
This exactly the type of movie what Indian Audience expect from Hollywood movies,,,,no blood,,,,not much violence,,,,clean action with thrill,,,,short film,,,,not boring atall.....

Anup has given this movie a Yay! Thumbs Up(Got exactly what expected......). Anup has posted 437 comments and has rated 108 movies. See Anup's page for more details.