wogma rating: Add to 'must watch' list (?) - But big screen will do better justice to the visuals!

Darren Aronofsky's Noah is a grand affair; visually stunning, and epic in scale. A strong central performance by Russell Crowe as the titular character makes the film something worth watching. Yet, the film leaves you with a feeling of it being inexplicably flawed.

There's something off the mark in Darren Aronofsky's Noah. You can't quite place your finger on it, particularly when you're watching the film, with its spectacular imagery and intense themes. Even once you're done, the film stays with you, all the while making you wonder why, despite liking the film largely, something still feels amiss.

But that, honestly, is for later. It is what cinema - good, great or average - should always strive to do. Make you question it for hours after you've watched it. Aronofsky's magnum opus does precisely that, even if it doesn't sweep you off your feet completely.

The Biblical tale of Noah, and the ark he built to help creation and life survive massive floods that were aimed at cleansing the world, is well known. Noah was a character that apparently fascinated Aronofsky so much that he's always wanted to make a film on him. 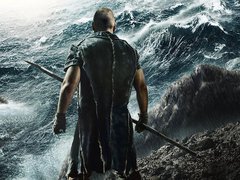 Noah, the film, is mounted larger than anything Aronofsky has made before. Also, in a big departure for him, this time around he tackles the theological and spiritual aspects directly, instead of layering them beneath complex characters, the way he has always done so far.

The effect of these on the film is a mixed bag. Visually, the film is undeniably striking. Remember, the film is set in a time period which can be equated to the infancy of planet Earth. The world itself, then, looks pristine and fresh. The skies a hue of blue we hardly ever see today, the soil and rocks look almost alien.

Some breathtaking frames and some interesting time-lapse and stop motion sequences make Noah a film whose images won't exit your mind's eye in a hurry. There are also some beautifully designed CGI creatures, particularly a bunch of them made of stone; with faces that look more like rough rocks, but which actually evoke an emotion.

On the flip side, even though the themes of the film - the corruption of humankind, the merciless manner in which we treat the other species we share our planet with, justice, guilt and so on - are universal, the fact is that this tale is set in a particular time. The visuals are impactful, but the characters and their stories seem distinctly - for want of a better word - 'modern'.

Nicholas Winding Refn's Valhalla Rising, for instance, (even though it has absolutely no similarity to Noah in terms of story or setting,) has similar visual feel to it. The desolation, which should have come out far more in Noah, which is set millennia earlier than Valhalla Rising, is not nearly as convincing in the former as it is in the latter.

Also, the fantasy element in the film is treated with a mix of edgy bravado and cautious trepidation. Almost as if Aronofsky wasn't sure if they were to cater to an adult audience or to children. Nevertheless, the VFX in the film are outstanding for the most.

Russell Crowe plays Noah with fiery intent. His physical graph in the film, as well as the sheer intensity in his eyes, traverse a journey which requires a truly committed actor, and Crowe shines. The rest of the cast, though competent, don't really have much to do.

Darren Aronofsky's latest, thus, can't be distilled into bad, good or great. Even in its shortcomings, it rises above so much we usually see on the big screen these days. Yet, it will leave you with that lingering feeling; that something about this epic story seems a little off.

I personally thought this movie was amazing. I did think that something was off. And I felt it was the way things ended, or the way the final choice made by Noah was treated. I felt like there should have been some stronger reasoning about why he did what he did in the end.

That apart, I felt the way the story moved, especially the convictions that built up inside Noah were portrayed beautifully. It was amazing to see the philosophy behind the decisions that he took, save the most important one towards the end.