No Fathers In Kashmir

A film well made. A story that is as heartbreaking as it is hopeful. An attempt at a balanced view, even if not completely successful.

These days it seems like the story is irrelevant as long as the agenda is clear. There is not even an attempt to mask the bias. It is like a viewer who seeks a balanced view should watch all the political films to find a fair opinion. But, how is that even possible with such seemingly extreme presentations?

Anyway, will seek a good story with good performances in the midst of all the politics.

No Fathers In Kashmir releases on 5 April 2019.

It is complicated. The Kashmir “issue”. There are facets that the rest of the country, let alone world cannot even imagine. Does a film wanting to present its point of view have to present all sides? I’d say it depends. If it is telling a story, then not necessarily. If it is making a statement and has an agenda, then it is only fair to ask for a fair representation. No Fathers in Kashmir is the second kind, and it tries to be fair too, but it is clear where the heart lies.

The contrast of the beautiful valley set against the inhumanity with which people deal with each other is stark.

Sure, there is a story. But each character or group of characters is a representative of the group they belong to. You have the militant aka terrorist, the military, the Islamist, the half-widows-half-wives, the resigned locals, the curious foreign mind who thinks she has the answers, the young boy who is being groomed for jihad and so on. Yes, the Kashmiri Pandits are glaringly missing in the mix. But let us for a moment say that the focus is on the plight of the families whose sons have been “picked up” by the Indian military.

In that aspect, No Fathers in Kashmir is moving. The one that got my guts wrenching was the loss of innocence and childhood. Through Noor (Zara Webb) the horrors are revealed to us layer after layer. We know of these horrors through newspapers and are yet shocked. To imagine children learn this first-hand makes you question your faith in humanity. Towards that end, the film succeeds.

However, to say that the film has represented the army adequately would be unfair. It makes a half-hearted, functional effort of presenting the soldier-on-the-ground dilemma. By no stretch of imagination, can I claim to know the nuances of the situation. Yet, saying that the military has no choice but to be completely arbitrary seems too lop-sided a view.

Other than the issue at hand, for a movie so focused on its agenda, No Fathers In Kashmir executes its purpose with elegance. The contrast of the beautiful valley set against the inhumanity with which people deal with each other is stark. You do feel like you have been transported to Kashmir and are peeking into the lives of people living there, much like Noor herself. The local flavour to the music adds to this milieu. None of this would have been possible were it not for excellent performances across the board. 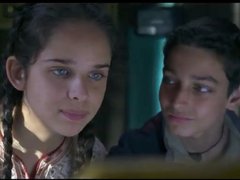 The politics, the war-mongering, the army needed to protect the border, the army having to decide who is a terrorist and who is not, the followers of Islam who think Kashmir can be theirs through aggression, the followers of Islam who think it is possible peacefully, the wanters of an independent state, the ones who want to be a part of India, the other lot who just want to live in their homes and go on with their lives as anyone else in the country. So many facets of the valley’s people. Here you see a few—some more, some less. As long as we are aware of that, No Fathers in Kashmir can be appreciated for its passion and hope.

Thumbs up, by Samrudhi Ghosh, india today : ...No Fathers In Kashmir leaves you thinking of the thousands of disappeared fathers, sons and brothers long after you leave the theatre. And the fact that it is a reality that Kashmir battles every living hour.... full review

Thumbs up, by Mohar Basu, MiD DAY : ...Kumar's film, however, isn't without loopholes. But you are willing to let them pass because the film makes a brave point - no one deserves to be woken up in the midst of the night by the resounding noise of bullets. Can this be rectified? The film makes an earnest plea, urging us to do our best.... full review

Thumbs up, by Kunal Guha, Mumbai Mirror : ...Few films set in the conflict-ridden state have accounted for the local sentiment. This one dares to expose the brutalities inflicted by army personnel without blatantly balancing the turf. Just a scene where the body of a soldier is being carted away is enough to even the scale.... full review

Thumbs up, by Saibal Chatterjee, NDTV : ...No Fathers In Kashmir isn't a crowd-pleaser. It is not even without a flaw or two - one that sticks out is the inconsistency in the English that Majid speaks, going back and forth between the pidgin and the propah. But given the questions that it raises, it is too important a film to ignore. Watch it if you respect a storyteller's freedom not to be inveigled by dominant, self-defeating official narratives.... full review

Thumbs up, Outlook India : ..."No Fathers in Kashmir" has its gaping flaws. These cannot take away from the film's disturbing truth about Kashmir that the rest of India is unwilling to face.... full review

Thumbs up, by UDITA JHUNJHUNWALA, Scroll.in : ...Directors of photography Jean Marc Selva and Jean Marie Delorme intercut full-screen and cellphone screen ratios to nudge along the narrative. Editors Thomas Goldser, Abhro Banerjee and Kumar keep the film moving at a clip that accentuates the writer-director sometimes stunning, sometimes stressful and all together sobering view of a situation that he seasons with hope.... full review

Thumbs up, by Aarty Iyengar, Times Now : ...While the cast and plot do a fine job of storytelling, the camera work is disappointing. Perhaps the makers wanted to merge camerawork with Noor's phone quality, for realism purposes. It just made the screen shaky and unpleasant. The film will leave you overwhelmed and should be watched for its strong theme that asks individuals to ponder over the status of the missing people in Kashmir Valley.... full review

Thumbs up, by Sreeparna Sengupta, Times of India : ...This film is not a light watch – it’s a poignant tale that leaves you thinking about the half-widows and half-orphans, and many such untold stories.... full review

So-So, by Urmimala Banerjee, Bollywood Life : ...No Fathers in Kashmir is an emotional story and you can watch it for some solid performances and great visuals of the valley. The film captures the contrasting landscape of the place where people with melancholic, cynical hearts reside in the midst of beauty.... full review

So-So, by Meena Iyer, DNA : ...Verdict: The film presents a ‘controversial’ viewpoint on the Kashmir issue. Apart from this, the two youngsters — Zara and Shivam — are lovely. Give them a chance.... full review

So-So, by Rahul Desai, Film Companion : ...In trying to show us the army-militant divide through Noor’s eyes, Kumar also literally uses her eyes too often: Much of her visit is spent following shady characters, eavesdropping on adult conversations, being omnipresent and hiding behind pillars and trees. Speaking of eyes, Noor’s are strikingly light and beautiful, as are those of Majid’s, in a way that deliberately mirrors Nat Geo’s famous Afghan Girl photograph: an image that, to this day, caters to the civilized world’s aesthetic perception of war. I’ve always believed that the picture doesn’t tell a thousand stories; it exoticizes a hundred. No Fathers in Kashmir is the cinematic embodiment of this image – and not entirely in a good way.... full review

So-So, by Devesh Sharma, Filmfare : ...All-in-all, No Fathers In Kashmir, reminiscent of Iranian cinema, tells us that as long as we don't stop being humane, we'll survive all the conflicts that threaten the human race...... full review

So-So, by Johnson Thomas, Free Press Journal : ...Ashvin Kumar not only shores up the production with all-round support in a variety of positions, he also acts as Arshid- one of the principal characters in the film, lending the required duality to an emasculated persona who is surviving the brutal after-effects of losing his friends and turning informer. Despite its contrivances and cinematic compulsions, this film manages to be fairly compelling viewing.... full review

So-So, by Vishal Verma, Glamsham.com : ...NO FATHERS IN KASHMIR could have been intensely hard-hitting & disturbing drama throughout but in any case the last 20+ odd minutes sees the movie transcending deficiencies through the sheer strength of its subject material – Missing people in Kashmir though it fails to balance it with a sweeping dope of hope. Going with 3 stars but with some concern.... full review

So-So, by Shubhra Gupta, indian express : ...But the kids, overall, are all right. They leave us with hope. As one of them says, pointing down a hillside: ‘that way is home.’... full review

So-So, by Troy Ribeiro, Sify Movies : ...Visually, the film is made up of a mixed platter of shots, some with fixed fames and others with shaky, hand-held camera shots. They are inconsistent, but the shot that stands out is the zoom-out shot when Majid and Noor are standing on the edge of the mountain side, when they are on their way to her father's grave. This panoramic view is breath taking.... full review

So-So, by Namrata Joshi, The Hindu : ...Kumar comes with a solid background in documentary filmmaking and has sound grounding in the politics of the State (Inshallah, Football and Inshallah, Kashmir), the reason one would have expected a far more searing and incisive account in the film than what one eventually gets to watch.... full review

Yay! Thumbs Up, by Acres Home