Luc Besson's Lucy is a fun sci-fi flick that has a daring premise to it. Treated like pulpy fun, however, and propelled by Scarlett Johansson's electrifying presence, the film spends more time on the thrills, than on some interesting questions that it poses.

The name Lucy might conjure black-and-white images of bubbly naiveté for some, but any lingering subconscious connections you might have made to a popular 50s American sitcom disappear quite quickly, once Luc Besson's latest film begins.

A spunky Scarlett Johansson in the title role almost immediately gets drawn into a violent series of events that lead to her being involuntarily administered a synthetic drug; except, the drug has an effect that one couldn't have ever imagined.

The film has an interesting premise - the fact that the human mind is known to utilize only 10% of its capacity. What would happen if, somehow, it was able to optimize and use every bit of it? The result - the film would have you believe - is mind-boggling. 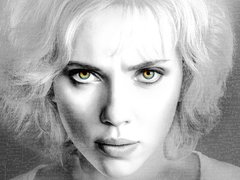 There's no denying that the pace of the film - always brisk - and Johansson's performance, keep you interested at all times. Things often get out of hand in terms of believability, and some of the VFX in the film are unacceptably tacky. Yet, it is that intriguing premise that holds the film together. As Lucy begins to use more and more of her mind capacity, you're always curious about just where all of it will lead.

Interestingly, Besson, who has also written and edited the film, clearly wants you to use more and more of your mind as the film progresses, just the way Lucy does. In the initial scenes, he cuts away to wildlife shots in the middle of the scene - to almost spoonfeed the audience about what exactly is going on. As the film makes its way to the business end, the explanatory cutaways cease, and the pace of cutting increases rapidly, making you concentrate harder.

Along the way, the film poses some truly interesting questions about human perception and our understanding of existence itself. It attempts to put forth a theory about humanity's existential crisis. Yet, the film never quite rises over being just pulpy sci-fi. There are thrills to be had along the way, particularly in one deft car chase scene, (supposedly) through the streets of Paris.

Johansson is terrific, which goes without saying. Not just because of her screen presence, but because she tempers her performance with subtle shifts that progress through the film. Morgan Freeman plays an elderly scientist and the only one who can understand what Lucy is going through - which basically means he plays Morgan Freeman.

Lucy is fun while it lasts, and if you choose to take the philosophical questions that it poses back home with you, then you could spend some time tossing and turning them over in your head, to draw your own conclusions. But somehow, it never quite seems like that was Luc Besson's intention with this film.

Want to Watch, by TimELiebe : Trash? Sure. But It's Promises to be GREAT Trash! ;)

Yay! Thumbs Up, by Fan : Let Us Connect You (LUCY) with God

So-So, by Anup : because of its short length ,, can be watched ,, because it will doesnt waste much of ur time

Pradeep - sure it's pulpy Sci-Fi (and the "we only use 10% of our brains" is one of those pop-science theories that was disproved a while back). But the main reason you go to see it is to watch Scarlett Johannson be like Black Widow, only MORE badass because she has MATRIX-Style superpowers now!

This is like Hollywood's version of ROWDY RATHORE or the latest Salman Khan beat-'em-up - stupid fun. And you have to admit, Scarlett Johannson is easier on the eyes than Salman Khan - even if she doesn't have an item number. ;)

TimELiebe has given this movie a Want to Watch(Trash? Sure. But It's Promises to be GREAT Trash! ;)). TimELiebe has posted 434 comments and has rated 179 movies. See TimELiebe's page for more details.
Anup

Didnt find much of any interesting thing in this movie....Was expecting some pop corn entertainment with some fancy sci fic elements ,, but niether the scientific elements were interesting(remember m using the word interesting not intelligent because i was not expecting any intelligence) nor the entertainment was of any popncorn genre.....Only a car chase and last 15 min showing the evolution of earth in a backward manner were interesting.......so u can say in this slick 1 hr 24 min movie i find 24 good mins,,,,.......rest of the 1 hr is totally uninteresting

Anup has given this movie a So-So(because of its short length ,, can be watched ,, because it will doesnt waste much of ur time). Anup has posted 437 comments and has rated 108 movies. See Anup's page for more details.
Fan

I had wanted to watch Lucy since its release because somehow I liked the idea of what would happen if we used 100% of our brains. I don't know why, difficult to explain, but I was drawn to that concept from the moment I had heard about it.

I happened to watch it quite by accident - as it was one of the movies on offer on a recent flight. All other movies either being less interesting or having been seen by me, I settled in to watch Lucy. Why am I talking about this, you might ask. It is just to tell you that a few minutes before I watched it I had no idea that I was going to watch it. And certainly even a lesser idea 24 hours prior to watching Lucy that within a day I was going to watch the film.

Now this is a freak and extremely rare coincidence. I will leave it to hard core mathemeticians to work out the probability factor of this coincidence. Exactly 24 hours before I watched Lucy, I was talking with a subject matter expert on Indian ancient philosophies and writings. He explained to me several things. The most important messages being that

(a) in Hinduism we believe that God is everywhere - in every object whether living or otherwise e.g. in human beings, in animals, in walls, in pillars, in trees, etc. God is everywhere. One of the reasons to respect everyone.

(b) Humans are composed of not one but 6 concentric bodies. Bodies that are made of energy levels. First body being our physical body that we see and feel. Other body shells being made up of energies. Human bodies, like any object, is composed of billions of atoms made from protons and electrons. Each radiating a frequency. The combined effect of all these atoms is what defines a human. The 6 concentric bodies each have their purposes. For example if a human being is able to detach himself or herself from the 3rd body then they would feel no pain whatsoever in their body. Kind of nerve centre. Being able to manipulate the 4th body is what hypnotists do - control the mind. etc.

And since all humans are formed of energy, so is god - hence the philosophy in Hinduism that god is everywhere. Every object emits energy through the frequencies of its protons and electrons. And the energy is invisible but it is there.

I would have forgotten this discussion had it not been that 24 hours later I happened to watch Lucy completely by chance. And what does Lucy talk about? Exactly the same thing.

Instead of the 6 concentric bodies it talks of the percentage utilization of human brain. With increasing usage, we get increasing powers and awakenings - oneness with God.

The way Lucy makes people see things with a gesture of her hand (people believe they are stuck to the ceiling - something like Mandrake gestures his hand) is straight correlation to the detachment from 4th body. Once again something that happens in real life - visit any hypnotism show in Las Vegas and experience it yourself.

And the final visual and spoon fed message that Lucy is everywhere - in each and every object - just like God.
The film even gave the message of "God is there but we cannot see him" just like we would not see a car that is moving at incredible speed - straight correlation to the concept of energy that is in the air but we cannot see it and only feel it.

I was amazed at how each and everything that I had discussed regarding Hindu philosophy 24 hours before viewing the film was portrayed in the film. I was hoping that somewhere the director would use Morgan Freeman to explain a link with Hinduism and its theories to give more credibility to the sci-fi part; but that did not happen. Maybe in the credits he might have put that - I would have to rewatch the film on bigger screen to be able to read the credits when they roll by. On an airplane low quality tiny screen it is difficult to read the small font credits.

All in all, based on my personal experience, a film very well translated from Hindu philosophy and set in a modern environment and given a modern twist to convey the same message of oneness, God is everywhere, and energies to control the universe. Certainly interesting and intellectual stuff - makes me dig deeper in the rich past of India (even though I am of the same opinion as Pradeep that this was probably not the director's intention). The movie also makes me even more curious as to how did the director happen to hit upon exactly the same principles as expounded by Hindu philosophy.

Other than the direct link to Hindu philosophy I did enjoy the film - Johansson did a very good job. Some scenes were too bloody - made me cringe - but I think majority of viewers might find them acceptable. Morgan Freeman was an accessory - instead of using a voice over they used a Robert Langdon kind of expert to explain what was going on with Lucy. I was a bit surprised by the deer walking into the ambush of the wild cat analogy - interesting way of showing things but at the same time the audience would have figured it out without having to show that scene. Anyways it was different and not jarring the narrative, so alright. All in all nice film, gives enough food for thought and debate. And to borrow Meetu's quote: Those who want to enjoy that intellectual debate will enjoy it come what may. Others can fret and fume all they like, but it will not diminish the grandeur of Indian past. :-) :-) :-)

Fan has given this movie a Yay! Thumbs Up(Let Us Connect You (LUCY) with God). Fan has posted 714 comments and has rated 200 movies. See Fan's page for more details.