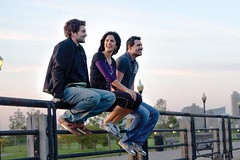 Audience is sensitized to the circumstances that create a terrorist. But, it is padded with fluff that is typical of Hindi cinema - songs, colors & happy faces. And this fluff is more in the narration rather than the basic plot itself. That with the predictable dialogues and turn of events makes this a little less watchable than it could have been. All set right in the second half though.

NOT A REVIEW - Just controlling myself from getting too excited about the "biggest" release in over two months...

No bets need to be placed that New York will start off as the usual Yash Raj extra-sweet personalities and relationships with a backdrop of guess what? NEW YORK! This time Aditya Chopra has a full-blown, viable reason for shooting in the city that is 'considered the center of the world' (as per the synopsis on the official site). You have your doubts? Watch this -

Jokes apart, there is huge potential for a good movie out of Kabir Khan, the giver of Kabul Express. Social relevance with a sizable dose of fun is always welcome.

Also a story written by Aditya Chopra usually tries to do justice to the lead ladies. Whether plausible or not, likeable or not, digestible or not - is a complete different issue. But Adi's women characters are something I look forward to. And to see Katrina Kaif doing something more than just looking pretty is going to be a refreshing change. In the director's own words,

Katrina is a surprise package in the film. No one would have seen her in this new avatar - deglamourised, no make-up and a real meaty role. She has been a revelation.

Sure, John Abraham is not remotely the best talent we have around. But, if directed well and put in a decent story, he manages to pass by. There's more hope when he's heard in a TV interview saying something to the effect, "if the audience comes out of the theater thinking about me nude and not about the situation I was in, the film has failed. I as an actor have failed." Fascinating coming from John. It will also be interesting to see Neil Nitin Mukesh play what looks like second fiddle.

It all comes down to the story which has terrorism and its effect on people and relationships. It sounds like a very humane, very sensitive plot. According to John it is -

I feel there is always a reason for someone to behave irrationally. That is what 'New York' is about.

Hope it has less of establishing the relationship between the three friends in happy songs and occasions and more on the conflict and believable resolution. Balance between what is thought as crowd-pleasing and intelligent story-telling. This in John Abraham's words sums it up,

Yes, this is not the jingoistic, America bashing film. It is a very unbiased way of (showing) what happened in America post- 9/11 and the way America looks at a certain section of a community and the way that community looks at America. "We are also trying to tell a story that is commercial enough to be called a commercial Hindi film. The basic subtext of the plot is very different but the way it has come across is very peppy.

Under the direction of Kabir Khan we saw some awesome cinematography and editing earlier, I hope that, at the very least, won't go away.

Yeah, looks like my expectations are high. But then again, the YR banner has been known to screw up many a good story with bright colors and dances. Fingers crossed and blank slate gearing up fpr this Friday.

Suppose the mango was not stolen. But it was a couple of buildings in downtown Manhattan that he conspired to blow up and did so successfully. Not pardonable, right? Even if it is similar to situation 4. But, of course.

Suppose he was not he, he was you? Now, what do you do?

This is the debate New York struggles with. It doesn't offer solutions or show one right path - that is the script's beauty. For, there ain't a straightforward answer to this dilemma. Yeah, there's loads of stereotyping - whites are painted the darkest hue of black. What if the whites were not the whites, they were you? After all the insanity and inhumanity of racial profiling is prevalent just about everywhere. That's exactly what the security guards at every building gate are doing. That's exactly what the barricades in the middle of city roads are for.

All good, message nice. Arguments on both sides convincing thus engaging. But, and here's the biggest BUT of all...why over-dramatize it? It's Aditya Chopra, so we know there's going to be drama. The 'over' is overtly annoying and doesn't provide much relief until the interval. It actually reminded of the days of VCRs when my mom would forward through half a Hindi film.

The background music is too on-the-ear except for a place or two where it's really well done. The close-ups are beautiful but at places which need ruggedness not beauty. The slo-mo's are arrrrrgggh!...yep...frustratingly irritating. Disturbing the flow, distracting from the plot and all that jazz! And this happens all the time, not just at key plot points. The one much talked about intense scene is completely spoilt by the camera gimmickry. Whatever catches the director's or producer's fancy, found place in the film, thus making it a much longer film than necessary. It didn't look like a Kabir Khan film at all. Did the producer do as much directing as producing?

Thankfully the producer, who's also the writer, also did a fair job of writing the overall plot. And this in comparison to reasonably well-received films like Black Friday and Fanaa, both of which had similar elements. And both of which I didn't really like.

The point is the struggle and the frustration of the people who are discriminated against. And that is made well enough for us to be curious about what's up next, despite the gaps. What scheme? What plan? Why is such a small gang under FBI's radar? The writer couldn't be bothered with those details. And when some of the more minute details are given you wish they weren't because you could've predicted them 30 seconds ago. There surely must be other ways to create suspense than to give it extra brooding time and kill it. Same goes for the (lack of) punch in the one-liners. But most of this is restricted to the first half. The second half becomes heavy and gripping.

Inspite of the glaring NO-NOs, there's quite a bit to cherish. The performances were brilliant. Now who would've thought this space would have said that about Katrina Kaif and John Abraham? Okay it's only relative, they are brilliant compared to their earlier non-performances. Katrina Kaif, as expected from an Aditya Chopra story, has a strong role in support. She not only looks her usual pretty self, but this time around, she makes you feel for her and her accent doesn't bother as much. John Abraham can actually convey his character's emotions if he's shown how and New York shows how. It's unfair that not much can be said about actors like Irrfan Khan other than "his usual best". The penalty one has to pay for being talented. Neil Nitin Mukesh is good but looks like he's capable of much more, just needs to find more variety.

So, what is it that can't keep the bling out of a YR film? When will the constant, visible struggle between supposed "mass pleasing" and need and mood of the story get over? They are edging to make films that make a difference. They have made some moves in this film that won't be very popular. Then why not go the whole 9 yards? Or are they taking one baby step at a time...pushing the envelope? I hope so.

Thumbs up, by Roshni Mulchandani, Bolly Spice : ...The strength of the film is the chemistry between the actors.... full review

Thumbs up, by Pooja Sudhir, DearCinema : ...The spot where “New York” falls feeble is on its ideological ground.... full review

Thumbs up, by Deep, Deep's Home : ...This movie might just break the chain of flop movies.... full review

Thumbs up, desi hits : ...Undoubtedly, the hero of the script is the screenplay.... full review

Thumbs up, Filmiholic : ...Your curiosity will get the better of you anyway, so go see it.... full review

Thumbs up, by Martin D'souza, Glamsham.com : ...What's more, the film stays with you the morning after as well.... full review

Thumbs up, by Taran Adarsh, IndiaFM : ...NEW YORK is, without doubt, one of the finest films produced... full review

Thumbs up, by Mayank Shekhar, NDTV : ...It's the sort of films that take Bollywood forward.... full review

Thumbs up, by Ashok Nayak, Now Running.com : ...Cinematography is first-rate and so is the editing.... full review

Thumbs up, by Sampurn, real bollywoood : ...The best film to come out of the Yash Raj stable after Chak De India... full review

So-So, by Gaurav Malani, indiatimes : ...The film turns the villain into more of an antihero imparting him no character change... full review

So-So, Movie Talkies : ...It could have been a brilliant film, but falls a bit short.... full review

So-So, by dr. mandar, Passion for Cinema : ...This film fails big time at that human level- it just doesn’t touch you!... full review

So-So, by Raja Sen, Rediff : ...New York could still have been a tolerable film if the actors were the only problem... full review

Not Interested in Watching, by jump rope weight loss

There are way too many loopholes that can't be discussed here 'cause they'll give the movie away. What can be discussed though -