It’s a Nana Patekar show all the way! But eventually, it’s only him trying to fill the lacunae for every inferiority.

One of the many reasons I still adore V.V. Shirwadkar’s classic play Natsamrat is the manner in which multi-layered narrative unfolds. It comes with its own limitations, has situational flaws and is draped in a setting totally ‘done to death’ to our contemporary senses. While it is written as elaborately as is possible, it gives only essential details away. Nothing much, but nothing less – an ideal storytelling scenario, isn’t it? This draws you in, makes you think, intensifies your train of thoughts – the very principle Natsamrat’s screen adaptation fails to carry forward.

However, like the original stageplay It does succeed with some high-octane words. The question, however, remains – how long can this wordplay help sustain your interest in the absence of narrative novelty? Though written and adapted terrifically, words instead serve as the ultimate weapon for Nana Patekar. He, in turn, outperforms all that could be asked of him. No wonder the importance shifts to his Ganpatrao Belwalkar, while the rest is left unattended. And that’s a shame.

Cinema and stage both have much in common, yet they’re poles apart. Mahesh Manjrekar’s film version has that kind of mature understanding. It seems like he gets the constraints posed by Ganpatrao’s illustrious monologues. So, freshly-drafted characters and settings step in, to back these monologues in a cinematic environment. Since the original plot about self-centred children turning against their parents is nothing but outdated, a new framework accommodates the same, worn-out plot. Now that they have made so many changes, I am bewildered that they couldn’t get rid of material that lost its essence a long time back. It’s good that Manjrekar and co. don’t cut-paste things, but additions are as good as nothing if they’re not worthwhile. 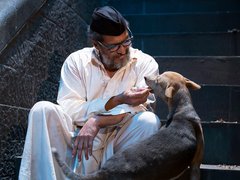 The play opens with Ganpatrao’s monologue as he bids adieu to the stage forever. It seems an ideal world until the flashback-esque moment suddenly returns to his present, worrying state. It shows the epitome of conflicts; and you take that for granted without even seeing its origins. It works for the play.

The film takes a different approach though. Starting off with a climactic plot, it strolls through his memory lanes non-linearly. Due to a new structural design, the film has to recreate conflicts from scratch. But instead of a set of events establishing a clear-cut disagreement, one or more moments come together as silly. What is even sillier is that you’re made to swallow everything blindly.

The film embarks on such a promising note that it saddens me seeing it falter soon after. With no appropriate character graph, except for your principal man, what else can you even expect? That means, appreciate whatever Nana brings forth, because it is perhaps a dream role; but don’t rant about the rest. In other words, Nana means the film and the film means Nana; rest isn’t even to be considered for your thoughtful engagement.

Rarely does dialogue stay as faithful to its respective characters as is in Natsamrat. Not just because they’re out-and-out peculiar and figurative at the same time, but more because they’re far more reliable than the script is. While a few adaptations only borrow original framework, a few bluntly imitate all they can. Natsamrat does both. Even though its newer structure is pretty much broken, a clever arranging and editing of original dialogue is my takeaway from the film. If you’ve seen or read the play, you’ll know a certain piece of a dialogue, monologue or verse is utilised in a completely different set-up altogether. That said, the scripting and staging is so appalling that this works at a point and doesn’t at another. I loved the effort nonetheless.

Natsamrat also falls short of dealing with melodrama. What works best for the play doesn’t necessarily suit the film. Ganpatrao being a hysterical man pulls that feat off with great coolness and composure. But you don’t really empathise with the state he is forced to live in. There are no feelings attached. What’s the use of words or performances minus emotional connect? Actors do here what is written for them, which doesn’t mean what is written is good enough and so do the performances – exception is for Nana, of course. However, Ganpatrao Belwalkar or anybody else can’t become a Natsamrat by themselves. Words, as this character rightfully pays ode to, are the unsung heroes beneath their skins. They can destroy them. They can help climb to glory as well.

Review is self indulgent and critic is too self obsessed. He can't see things objectively as he has limited vision with knowledge of technical words

Riddhi S has given this movie a Yay! Thumbs Up. Riddhi S has posted 3 comments and has rated 2 movies. See Riddhi S's page for more details.
Riddhi S

This movie is great journey and we can see people getting touched while watching . period .

Riddhi S has given this movie a Yay! Thumbs Up. Riddhi S has posted 3 comments and has rated 2 movies. See Riddhi S's page for more details.
Fan

Good film. I totally endorse the reviewer's remark : it is a totally Nana Patekar show all the way.