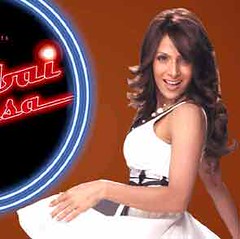 Not all love stories are the same. So, we have four. There is an attempt to touch upon some serious issues in relationships, while retaining a sense of humor. Unfortunately the humor is neither atrociously funny nor subtle. The serious parts lack novelty and punch. And neither can you take anything seriously nor can you sit back and enjoy the laugh.

Anyone who stays in a metropolis and is reasonably social will know people who remind them of each of the eight characters in the movie. But yet, neither do you identify with any of them nor do you feel good about/bad for any of them. Conclusion - the characters are reasonably well sketched out but the narrative doesn't engage you.

Since the characters are regular people you aren't really expecting a never-imagined-before story. Four couples - four different types of love stories. Fair enough. Presumably each one represents a type of metropolitan relationship. But, does a story about regular people really make for an interesting movie? True, we crave for realism. But, it has to be insightful, leave a mark on your thought process. If a few laughs are what you want, you'll get those, but I don't think that is what the makers had in mind. They intended to make something more meaningful in a lighter vein, but light vein is all that we are left with.

And there are a lot of inconsistencies. The funny lines make you laugh, thought not "out loud". And some supposedly funny situations don't do even that. The "boss" character was entirely avoidable. Introspective and/or emotional moments turn into lectures that you have imparted/listened to at some point in real life. And most likely, you used much better language. The writer has to be given due credit for inventing a new swear word though.

The actors who deliver these lines aren't the best at their job either. The best of the lot, Manjari, is just about average in talent. Amruta is loud at most times, Neelam shouldn't have been given dialogues at all - certainly not English monologues. (Neelam's screen name is Xenobia and every time she came on screen the word "Xenophobia" kept popping into my head.) Anyway, none of the actors have the screen presence to make it work.

The music could have been a little appealing had there been different tunes to different songs. Since almost all of them sounded the same, by the time you listen to the third song, you have reached the expiry date of the tune. The presentation is at best random. No sizzling dances to sweep you off your feet. Lyrics are by Sameer. Do I really need to say that they weren't interesting either?

What was interesting though was the camerawork in one of the scenes. So, this is a movie about relationships, you have proposals and you have break-ups. Amidst all the ordinary camerawork, at one such break-up, you have the camera crew getting all creative on you. They take handheld camera shots as used in thrillers, thrilling background music et al. Technically, the entire scene looked completely out-of-place.

Oh well. Mediocrity, thy name is Mumbai Salsa. Stories of our lives may seem interesting to us, but unfortunately they do not make watchable movies. So much for realism!

Thumbs up, by Nikhat Kazmi, Times of India : ... But stereotypes are gently broken and love blossoms through hiccups and hindrances, never losing humour as the sub- text.... full review

So-So, by Martin D'souza, Glamsham.com : ...With a relative new star cast, the actors do well, staying well within the characters they play.... full review

So-So, by Taran Adarsh, IndiaFM : ...Directorially, Manoj Tyagi has handled the emotional moments well, but the director in him seems to be swayed by the writer in him.... full review

So-So, by Apurv Nagpal, J.A.M : ...the pace of the movie and the performances are both a bit uneven... full review

So-So, by Hanumant Bhansali, Radio Sargam : ...The first half has nothing much to tell, whereas the second half is quite fruitful in its slick approach of using incidents in the narration... full review

Thumbs down, by Fatema H Kagalwala, Business of Cinema : ...The fact that the voice behind it is lesser evolved and vision far narrower lets an otherwise OK film down.... full review

Thumbs down, by Praveen Lance Fernandes, indiatimes : ...Multiple stories with relationship problems are getting old especially when there is nothing new to offer... full review

Thumbs down, by Pankaj Shukla, SmasHits.com : ...It comes with a statutory warning -- please do not expect miracles in the film.... full review

A group of four guys finds girlfriends in a group of three friends and one lady-colleague. The movie is about the ups and downs in their relationship.

i agreed with kunal baikunth singh!! you are right Mr. Singh!!