Superficial, predictable, terrible... Isn’t this a standard ingredient of our hit films?

Mumbai Pune Mumbai 2 - Where no word is enough to describe the superficiality of a film, where mediocrity knows no bounds or mediocrity wilfully breaks bounds, where brand endorsements are tolerable more than the film itself, where this supposedly romantic comedy is hopelessly unromantic, where the film shouldn’t have been a film in the first place, and yet, where no critique can prevent romantics from devouring it - you get the hang of what to expect or perhaps what not to. But, this is the least of anybody’s concern as long as fans are happy, they feel good about it, they feel romantic once again. Yes, I’m not its target audience. But I doubt Mumbai Pune Mumbai 2 can please the fans either, let alone generating new ones.

Let’s start where it all started. The reason I had liked the slightly above-average Mumbai Pune Mumbai was its endearing setting – two characters, no costume change, minimalistic make up and locations, and most importantly, no standard plotline. You stay connected even when only dialogue channels the story, while forgiving Indian television-esque picturisation and lighting.

Here we are, 5 years later, its sequel has superior resources, better camerawork, but overcrowded and flimsy characters. It takes off from where the previous one ended, involves the same lead pair and carries the name of the original as well. But that’s that. It doesn’t bring anything different to the table. What this film actually holds is a story we have run into a hundred times. Of course, this is peppered with our traditional masala formula. Yet, nothing stops it from being an overloaded extension, a terrible one though. 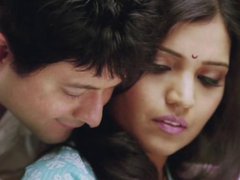 If Mukta Barve’s character in the first film seemed introvert, demanding, determined and hopelessly romantic, we now see a lot of sudden changes in her as per writers’ convenience. Though not wrong, they want you to believe her confusion based on the way she orders her drinks. She is bold because she downs vodka glass after glass, really? And yes, she is indecisive too. She can’t decide between her ex-boyfriend and future husband. With her traits being the source of conflicts, our Puneri boy is devoid of conflict. All his agony is probably restricted to the last thirty minutes. But up to that point, he is unsurprisingly careless and open-minded. But all this boldness, broad-mindedness, sugar-coated smiles, happy-go-lucky attitude is tedious to a point where you don’t want to see it anymore. With mutual agreements, marriage rituals begin and so does the showiness.

If this film was written well or wasn’t written at all, the makers would have saved you the agony of seeing same characters in the form of same faces. It could have probably looked bearably better with a powerful cast and direction. Without a doubt, such a film wouldn’t have found finances in the first place, let alone getting a release. When popularism outdoes content and box office results imply excellence, this is expected.

So-So, by Rose : No storyline

Nay! Thumbs Down, by Kst : The movie is waste of money.

Kst has given this movie a Nay! Thumbs Down(The movie is waste of money.). Kst has posted 1 comments and has rated 1 movies. See Kst's page for more details.
Rose

Review is spot on. No plot/story
Waste of talent specially the lead pair.

Rose has given this movie a So-So(No storyline). Rose has posted 2 comments and has rated 2 movies. See Rose's page for more details.