As refreshingly simple as is poignant, as much about death as it is about daily life, as sombre as is spirited. Mukti Bhawan seems slow yet engages.

A film about death is unlikely to have a sparkle. A film's ordinary protagonists are expected to do something heroic. Yet, they ought to do so while staying in the realm of reality. Mukti Bhawan doesn't glitter but is like a jewel that has been lying open in the attic - jaded but sneaks a gleam through one spot that escaped the dust. But even if you could take pride in owning it, it is not practical for you to wear it often. Mukti Bhawan is that slow-paced, “nothing really happens” film you can watch once in a while. But that once, it will make you smile even as it is with a tinge of dark humor. Living through your ordinary life, dealing with the regular ups and downs, doing what is expected of you – who said that is not heroic?

the film's comment on generation gap and changing times is unmissable...also means that the film stereotypes an entire generation

If there is one time when it is acceptable to disobey your parent, it is when they asks you to drop them off to a city that is considered the city of salvation - a city that welcomes people who think their end is near. Rajiv (Adil Hussain) is faced with the same dilemma. It is not that his father (Lalit Behl) has been the best parent around, it is not that he doesn't frustrate Rajiv with his petty bickering or demands. But you can't just leave your parent to die.

This identification with Rajiv alone is enough to keep you with the character. He does his duty like any other child. Maybe he takes a step less or more. It is not a very deeply defined character, but this one aspect about him is all that is required for the film. Dayanand Kumar, his father is the drifting ol' man you'd expect a 76-77 year old to be. That along with the milieu of Benares kept me immersed. Adil Hussain and Lalit Behl share that love-hate chemistry that any other parent-child would share, thus making them absolutely believable.

It is not only this familial relationship that Mukti Bhawan touches upon. The relationship Dayanand has with young granddaughter, Sunita (Palomi Ghosh) is an example of how friendship skips a generation – or as my mom often quotes, “The interest earned is dearer than the principle amount.” (a Marwadi proverb). With simple things like how the delicious food a wife or daughter-in-law (Geetanjali Kulkarni) makes stays unappreciated, Mukti Bhawan also comments on how the lady of the house is taken for granted.

And of course, the film's comment on generation gap and changing times is unmissable. Will Sunita who makes supposedly selfish decisions take care of Rajiv, the way he took care of his father? Will the next generation have even lesser time than the current one? These questions also mean that the film stereotypes an entire generation. Yes, it does feel like the film is making a sweeping comment rather than talking about one Rajiv or one Sunita or for that matter even on Dayanath. For it also has a Vimla (Navindra Behl) who mentions her son, Ravi who behaves like Rajiv. That she is upbeat about it like Dayanath only deepens the stereotypes. 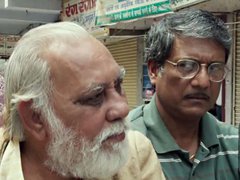 Despite this annoyance, Mukti Bhawan's take on death is what makes the film worth a watch. It isn't an Anand-esque take, neither is it all morose. It is a tone of acceptance.

You don't expect ordinary lives to have an extraordinary end. That makes this small film larger than film – more because not many talk of life and death with this spiritual sense.

Thumbs up, by Bobby Sing, Bobby Talks Cinema.com : ... it was not able to take me into any meditative state thinking about DEATH... full review

Thumbs up, by Subhash K Jha, Bolly Spice : ...The patriarchal declaration—to be ignored only at the family’s own risk—is made with no peripheral support from conventional cinematic devices. ... full review

Thumbs up, by SUPARNA SHARMA, Deccan Chronicle : ...The endgame, as it is played out in Mukti Bhavan, is a dance of opposites. ... full review

Thumbs up, by Dev Raj Gulati , Desi Martini : ...The theme,the presentation,the all round good performances uplift the film by several notches.... full review

Thumbs up, by Johnson Thomas, Free Press Journal : ...It’s serene and profound- certainly a salvation for those who have been routinely sucked in by the generic fervor of the trashy Bollywood film.... full review

Thumbs up, by Vishal Verma, Glamsham.com : ...Shubhashish approach is simple, grounded with wit and blended with Indian tradition and values that make an instant connect with the concern audience. - See more at: http://www.glamsham.com/movies/reviews/mukti-bhawan-movie-review.asp#sthash.FJmOy6pl.dpuf... full review

Thumbs up, by Sarit Ray, Hindustan Times : ...Mukti Bhawan is a heightened culmination of Benares, a last leap of faith for the unquestioning believer.... full review

Thumbs up, by Shubhra Gupta, indian express : ...a many-layered revelation: of the interplay between life and death, the see-sawing connectedness and distance between family members; and how, in a very profound, absurdist sense, all of life is a journey towards death.... full review

Thumbs up, by Surabhi Redkar, koimoi : ...Can you really tell when is it the right time to say goodbye? Can you really die at peace? The film further delves into these.... full review

Thumbs up, by Uday Bhatia, Live Mint : ...If you find the idea morbid (as I did going in) then you might be pleasantly surprised (as I was) by the film’s gently comic, highly empathetic attitude towards this strange, sad arrangement. ... full review

Thumbs up, by Jaidev Hemmady, Movie Talkies : ... every member of the cast is near flawless... full review

Thumbs up, by Kunal Guha, Mumbai Mirror : ...Unintentional comedy emerges from the events that follow in Benaras... full review

Thumbs up, by Raja Sen, NDTV : ...'Suddenly existential,' in fact, is a good way to describe Bhutiani's film, a film about making peace with one's life - enough to want to bid it adieu. ... full review

Thumbs up, by Divya Pal, News18.com : ...Amazing job in capturing the essence of the spiritual power of the city. ... full review

Thumbs up, by Manisha Lakhe, Now Running.com : ...There is smell of death all around, and yet there is sunshine when the old people sit and joke, decorate their rooms as if it were not really imperm... full review

Thumbs up, by Nandini Ramnath, Scroll.in : ...Their relationship is loving and respectful but also testy and resentful. ... full review

Thumbs up, by Namrata Joshi, The Hindu : ...Things flow seamlessly — at times extremities stay concurrent and at others overlap.... full review

Thumbs up, by Stutee Ghosh, The Quint : ...Nothing has been photoshopped for comfort by David Huwiler and Michael McSweeney and yet Varanasi looks nothing like what we have seen it in mainstream movies till now. ... full review

Thumbs up, by Nihit Bhave, Times of India : ...The plot is too skimpy and with its languid pacing, the movie eventually seems a bit indulgent.... full review

So-So, by ROHIT BHATNAGAR, Deccan Chronicle : ...Few moments between the two will make you smile and cry at the same time... full review

So-So, by Ajit Duara, Open Magazine : ...The result is that the movie retains an air of tranquillity, while being shorne of any dramatic conflict.... full review

salman3126: Folks “Mukti Bhawan” is an instant classic that will remain in my mind till I find myself in my own weary days.

sadhvijayaraman: Mukti Bhavan is a special movie. Its characters will stay with you long after you'd stop expecting them to.

plumpernickel: So Mukti Bhavan. Horribly slow and fake deep. Also, has anyone had enough of movies set in Banaras?

pjptl55: Mukti Bhawan is an absolute treat for Bollywood lovers. Its a brilliant movie with a magnificent star cast.

Navjotalive: Mukti Bhavan is a very competent debut by @shubhashishb and a must watch for the way he has captured burning issue for all of us, Death.

AnupamkPandey: Excellent &amp; a must watch movie @MuktiBhawan || Thanks for your efforts @_AdilHussain for spreading message about "Mukti Bhawan, Varanasi".

Yay! Thumbs Up, by Sonia

I don't know why but the movies with known celebrities like MASAAN, NIL BATTEY SANNATTA, UDAAN are doing extremely well. And now its Mukti Bhawan.

Sonia has given this movie a Yay! Thumbs Up. Sonia has posted 20 comments and has rated 13 movies. See Sonia's page for more details.