Alternate lives based on the choices you make, consequences of your actions, helplessness of the conscientious – the film takes on these philosophies in an absorbing, crisp-ish tale of right, wrong, and ... ?

Monsoon Shootout gets so many things right by just keeping things simple and straightforward. Else, a story that involves change in consequences depending on the choice a character makes could get too confusing, too quick. Also, it gives the writer room to explore the crux of the story – the dilemma. You are engaged through most of it because it is like watching 3 short films, with characters who you have grown familiar with.

The first viewing certainly promises that there are details you could have missed out.

This build-up of characters across the choices intrigued me the most. The story around the last choice wouldn’t have had an impact, if we didn’t know what we knew about the characters. Also, by this last round, you also are familiar with the tone of the film. You know whatever the protagonist does, his life is a bit of a mess. And you still wish he comes out at least half successful. This is the hook. Your emotion entangled with the good guy for nothing but his goodness. You almost don’t want him to have to struggle with right, wrong and the paths in between.

While dealing with these larger philosophical questions, Monsoon Shootout also points fingers at each wheel, in the gear system, that makes being dutiful and principled so difficult – the business-politician-administration nexus, the objectification and exploitation of women, the wrong ways of doing the right thing, having to accept that the end justifies the means, and despite it all, the expected morality from a common person.

The wonderfully woven script brings out the protagonist’s vulnerability as simply as if it were a flow chart. Sure, it gets a tad repetitive and slightly long-drawn towards the end. But arguably, the choices ended at the peak.

The writing is also elegant in that the characters don’t drastically change even though their choice-dependent world has changed. It must certainly have been tempting to draw contrasts by making the unknowns diametrically opposite in nature. 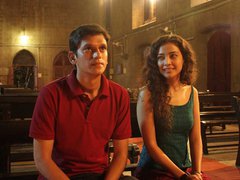 This is one of those rare films that has such a firm grip on the writing that it makes the work of the actors look easy. The three protagonists played by Vijay Verma, Nawazuddin Siddiqui, and Neeraj Kabi might be varied in terms of experience but have been bankable since their first films. Unfortunately, the supporting characters came across as caricatures.

And yet, it is acceptable enough to not take away from the various points the film wants to make. Monsoon Shootout is certainly one of those I’d like to watch again to observe the nuances I might have failed to notice. Yes, the first viewing certainly promises that there are details you could have missed out.

Thumbs up, Free Press Journal : ...Some of the moral dilemma, specially those involving the criminal’s young teenaged son (interesting juvenile newcomer Farhan Mohammad Hanif Shaikh) are disturbing to the extreme. Director Amit Kumar doesn’t hesitate from making hard choices on behalf of his characters. Consequently, this dark blood-dimmed film leaves us with a hollow feeling in our stomachs. ... full review

Thumbs up, by UDITA JHUNJHUNWALA, Live Mint : ...There’s nothing superfluous in the storytelling. The cinematography, the relentless rain, the background music and the tension between Shiva and Adi give Monsoon Shootout its mood and intensity. But the editing is abrupt at times. It feels like the characters are missing a dimension that would make them less like characters in a tableau. So although Kumar’s film is emotionally wanting, it is technically accomplished and skilfully engaging. ... full review

Thumbs up, by Sonil Dedhia, MiD DAY : ...The performances are striking. Varma plays his part perfectly, so does Kabi. Tannishtha Chatterjee as Shiva's wife is convincing. Siddiqui's performance is remarkable, but since he's been essaying the same kinds of roles, it also seems monotonous. The movie also has the usual clichés, like Adi meeting his ex-flame Anu (Geetanjali Thapa), who has now become a nurse. A song featuring the two looks forced. But this one's surely worth a watch. ... full review

Thumbs up, by Saibal Chatterjee, NDTV : ...Another crucial contribution that enhances the impact of Monsoon Shootout comes from Indian-American singer and composer Gingger Shankar, whose musical score pulsates with energy and adds a throbbing soundscape to the film. And, of course, the Mumbai-in-the-grip-of-monsoon backdrop bolsters the noir quotient of Monsoon Shootout. ... full review

Thumbs up, by Nandini Ramnath, Scroll.in : ...The bigger and more abstract idea – morality changes depending on the point of view – gets a bit lost in the efforts taken to ensure that each of the tracks is separate from one another as well as coherence. Yet, the movie works perfectly as a neo-noir thriller set in a city where nothing goes according to plan. One moment has several scenarios in Monsoon Shootout, but the outcome – smart writing and direction – remains the same throughout. ... full review

So-So, by Anna MM Vertticad, FirstPost : ...Four years has been an unfairly long wait for mainstream Indian theatre-goers, but our reward is a nicely engaging film with several morally compelling questions at its core. ... full review

So-So, by Vaishnavi Kulkarni, fullhyd.com : ...Monsoon Shootout is a film you'll neither hate nor love - it holds your attention while you are watching it, but fails to be a movie that is worth remembering or reliving. ... full review

So-So, by Jaidev Hemmady, Movie Talkies : ...In conclusion, Monsoon Shootout is not a ‘run of the mill’ fare, so watch it only to discover something new and not for thrills...... full review

So-So, by Kriti Tulsiani, News18.com : ...But what dilutes the impact of the narration and a dependable cast is the familiarity of the account chosen to represent a significant psychological aspect. The basic idea that a do-gooder-rulebook-greenhorn is pulled down by the internal politics and corruption in the system overshadows the potential impressive psycho-cosmic angle of human decision making in the larger scheme of things. And ultimately gives this film a certain delusional greatness towards the climax. So what could’ve been a thrilling masterpiece remains an artsy thriller in search of a better plot. ... full review

So-So, by Namrata Joshi, The Hindu : ...Yes, one of the scenarios of Monsoon Shootout feels like a prequel or accompanying piece to Raman Raghav 2.0. Varma capably conjures up the innocence, naivete and vulnerability as well as the guilt, regrets and doubts that his character demands. He has also waited patiently for the film to find a theatrical. Now for if the patience will pay.... full review

So-So, by Lasyapriya Sundaram, Times of India : ...The cinematography is top notch and the manner in which the city of Mumbai is invested with a visceral quality is one of the film's high points. Vijay Varma makes a fairly assured debut in a lead role and Nawazuddin Siddiqui plays evil with a smirk and elan. Since the actors reprise their roles thrice over, they often don't have enough screen time to flesh out their characters adequately. ... full review

Thumbs down, by Bobby Sing, Bobby Talks Cinema.com : ...However being a weak project, the film is not going to work in favour of anyone as it seems due to the reasons given in the detailed review available at the link given below. ... full review

Thumbs down, by Sweta Kaushal, Hindustan Times : ...Vijay Varma outshines everyone in the film. He is the kind of actor who makes you forget his face and believe in his character. From guilt to remorse, anger, love and more, Vijay manages to convincingly portray each emotion with the perfect conviction. ... full review

Thumbs down, by Umesh Punwani, koimoi : ...This is a film true movie-buffs could watch to learn some good stuff about narration, others can totally skip it. Watch it only if there’s a shootout happening in monsoon and you’ve no place elsewhere to hide. ... full review

Thumbs down, by Kunal Guha, Mumbai Mirror : ...Despite scenes where we see a head popping out of the body like a cork from a bottle of sparkling water, blood being squirted on faces and other unmentionable graphic scenes, there's little intensity as it all seems constructed and trite. Also to be pinned for this half-baked product would be the film's editing which is embarrassingly choppy—not in an indie way—but like the-editor-dozed-off-on-the-keyboard way. ... full review

Thumbs down, by Manisha Lakhe, Now Running.com : ...What is worse is that the story looks pre-cellphone era. The rookie cop asks the doc out on a date. She waits patiently at a church (to look beautiful with all that candlelight), while he's taken away by Khan on an assignment. They don't text each other? ... full review

Thumbs down, by Prasanna D Zore, Rediff : ...Had writer-director Amit Kumar given his characters more time and fleshed them out, Monsoon Shootout would have been a wonderful cinematic experience. ... full review