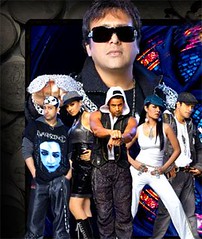 An adorable idea pulped to a deplorable mince. 6 characters are so busy doing their own thing that the story just seems like a by-product.

"The common man should have style too." is an interesting concept to put forth. And to bring about that you have an ensemble of interesting characters. A rich, spoilt brat but he has business acumen, a fashion designer who cares for the common man, an honest advertising creative head, a fashion model, a popular TV actoress, and a loser who has an unbeatable positive attitude. And the attempt is by keeping the vein light. Unfortunately, ultimately nothing comes of the synergy they could create as a team or to them as individual characters.

You're right, this is too serious an analysis for a movie in this genre and with this look and feel. But, every time I see a good idea blow up in execution, it hurts...And think about it? A comedy that squeezes out the sense of humor in you (believe me, I do have one!)

Of course, the common man here refers to a person with no means to wear labeled brands, and has no sense of fashion. However, if the basic idea were thought through properly, it could have been extrapolated to so many situations where the common man suffers an unnecessary inferiority complex. This complex could be treated with something as simple as a product created just for him and by just being honest with him. Alas, if wishes were horses...

If the elaboration of the story is amateurish, the other departments from screenplay, to dialogues, to their delivery, to the expressions on the actors' faces, to the ambience created around the actors, to the background music are equally amateurish. It's really a shame that when half an hour is spent in establishing the 6 main characters and 2-3 side characters, in the end it all seems futile. For example, Aftab Shivdasani's character who's creative at coming out with advertising taglines, does nothing spectacular in the end! None of the actors are given anything out of their comfort zone and thus nothing seems more than below average. As we have it, Govinda fans could very well be disappointed too.

I guess we should be grateful to Ganesh Acharya for deciding on limiting usage of Om Puri as a voice over. Otherwise, we know what he can be made to do in slapsticks such as these. But, that doesn't relieve us from Prem Chopra's antics. One can't get everything one wishes for.

Yet, there can be no excuse for keeping him on screen for long spans of time with just one expression on his face. And this happened more than once, where nothing was happening on screen, even the camera wasn't moving! So yeah, some trimming was obviously called for.

There are digs on various characters and issues you would encounter in your day-to-day life - Label designers and their attitude. Family soap operas, the camerawork and sound effects they use and of course, their viewers. Industrialists, the rich and their problems which have seemingly simple solutions. Telemarketers and how they annoy us. Popularity can make the commonest person a TV show host.

I thought the non-jumpy movements given to the actors in the songs were nice, if only for being different. But, the placement of the not-so-good-sounding music is so abrupt that the 'nice' feeling comes too late in the song to register.

So-So, Filmiholic : ...If you’re a diehard Govinda or Ganesh Acharya fan, ok. Others, walk on by.... full review

So-So, by Patcy N, Rediff : ...The director takes his own time to introduce each character, parts of which should have been cut down.... full review

Thumbs down, by Baradwaj Rangan, Blogical Conclusion, The New Sunday Express : ...a wag at the theatre yelled “Thank you” when the power went off for a minute... full review

Thumbs down, by Suranjani Nandi, Buzz18 : ...An extremely old Govinda pretending to be in his late 20s (reminding you of Dev Anand)... full review

Thumbs down, by Khalid Mohamed, Hindustan Times : ...Excruciatingly juvenile and as annoying as a traffic jam... full review

Thumbs down, by Taran Adarsh, IndiaFM : ...The story sounds interesting on paper, but on celluloid, it's non-existent... full review

Thumbs down, by Janhvi Patel, indya.com : ...Ganesh Acharya is not Farah Khan and he should stick to choreography.... full review

Thumbs down, Movie Talkies : ...MainSiteID ReviewerName ReviewPageAddress Excerpt Rating 23 #http://www.movietalkies.com/movies/editor-reviews.asp?MovieId=19220# The only actor who manages to raise a laugh or two is Govinda.... full review

Thumbs down, by Anupama Chopra, NDTV : ...The film is supposed to be a comedy but I didn't crack a smile once.... full review

Thumbs down, by Hanumant Bhansali, Radio Sargam : ...a dose of horrifying music, over the ‘bored’ acting performances, stale dialogues and no comic relief whatsoever.... full review

Thumbs down, by Sonia Chopra, Sify Movies : ...For a comedy, the humour is severely below par.... full review

Thumbs down, by Nikhat Kazmi, Times of India : ...HARD to understand why Govinda needs to be so desperate?... full review

An heirless business tycoon is about to die. He chooses 6 random people to inherit his business.

An adorable idea pulped to a deplorable mince. 6 characters are so busy doing their own thing that the story just seems like a by-product....

I will Surely watch the movie,only for the laughter king GOVINDA.

cool...do come back and let us know what you thought. It'll be great to know what a Govinda fan thought about the film...