Starts with lightness and smiles, end jerks tears sweetly. The in-between though slumps and drags. Making for a fitful watch that you don’t mind having spent time on. (Available on Netflix)

Mimi begins with quips and snappy dialogue that make you sit up and take notice. Sure, you know to expect witticism from the trailer, but I didn’t see them coming from the moment Kriti Sanon speaks her first lines as Mimi. And it stays crisp and smart for a bit. Later, though, it slumps. While the funny lines don’t make a comeback, the film takes a slight emotional up-turn towards the end.

I especially enjoyed the companionable silence between Mimi and Shama, and Mimi and Bhanu.

So, it feels like the film is playing on two planes—emotion and entertainment. When it begins, it is pretty much at zero emotionally and reasonably high at entertaining. Towards, the end it is pretty much zero at fun, but the situation gets emotional enough to tug at your heart. Yes, for about an hour or so, Mimi is zero on both graphs.

In that one hour, the biased treatment towards characters and situations pushed me away from the film. Uncomfortable stereotyping, racism and body-shaming become the crux of the movie in that part post-interval. It doesn’t help that the theatrics begin to edge towards melodrama a little too often too.
That Supriya Pathak (Mimi’s mother) is burdened with tantrum-like outbursts is a curious choice. The lady is capable of having her say without going all weird on you. Fortunately, the reins are in the hands of Pankaj Tripathi (Bhanu) for a good part. And Kriti Sanon plays her role with admirable restraint too. Sai Tamhankar (Shama) makes her presence known through her quiet and dependable support for Mimi.

The rest of the film is equal parts cringe-worthy stereotyping. Some bits are central to the surrogacy theme of the movie, like a pregnancy montage that seems like a Wikipedia list of symptoms during pregnancy—all trimesters mixed up. And other parts are lateral, like a comment on Hindu-Muslim separation in the country or men’s attitude towards beautiful women.

Also, I was hoping that the film didn’t glamourise motherhood, especially after the nice start that motherhood is given at the beginning of the film. But that isn’t meant to be. It takes it one step further and dorns the mother in sarees to fit the ideal mother role. 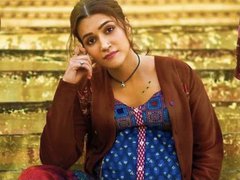 Other trivial things bothered me because it felt unreal in the film’s otherwise quite natural texture. For instance, while Mimi seemed to have grown in the first four months of her pregnancy, she stayed the same from then on. Then tens of thousands of rupees in cash were openly changing hands on a road—is anyone really so carefree? And while we are at it, the accents seemed inconsistent too.

On the other hand, Mimi treats friendship, both woman-woman and man-woman friendships, with freshness. I especially enjoyed the companionable silence between Mimi and Shama, and Mimi and Bhanu. These moments, the quick one-liners in the first half-hour, and the music make Mimi worth the time you spend on it.

Thumbs up, by Devesh Sharma, Filmfare : ...All-in-all, watch the film for its sensitive storyline and for Pankaj Tripathi and Kriti Sanon’s performances...... full review

Thumbs up, by Madhuri V, Filmi Beat : ...In one of the scenes in the film, Mimi is seen counting her earnings and asks her bestie Shama how she will be able to achieve her dream with such a meagre amount. To this, the latter replies, "Sab ho jaayega. Sabr kar. Sabr ka phal meetha hota hai." Likewise, Kriti Sanon's labour of love leaves you misty-eyed and with a sweet taste. Mimi is a compassionate tale of strangers brought together under exceptional circumstances... full review

Thumbs up, by Umesh Punwani, koimoi : ...All said and done, Mimi is the biggest surprise of the year. Laced with stupendous performance, a breezy high-on-emotions story, Rahman’s soothing opera, Sanon’s career-best act & Tripathi being classic for the nth time, Mimi is a delightful blend of humour and emotions.... full review

Thumbs up, new movie : ...Power-packed performances from the lead cast, brilliant composition, direction, and engaging plot are the reasons behind making the comedy-drama “Mimi” a must-watch for everyone.... full review

Thumbs up, by Vaibhavi V Risbood, Pinkvilla : ...Overall, Mimi is one of those mid-budget films that rides high on content and performance to build relationship with the audience.... full review

Thumbs up, by ANISH MOHANTY, Planet Bollywood : ...‘Mimi’ delivers an important social message and offers great entertainment value at the same time. Led by strong performances and a consistently engaging screenplay, this film is well worth your tim... full review

Thumbs up, by Renuka Vyavahare, Times of India : ...A complete family entertainer after long — Mimi picks a relevant topic and turns it into an engaging, empowering and compassionate tale on humanity and motherhood.... full review

So-So, by Soumya Srivastawa, Hindustan Times : ...In the opening scene, at a surrogate 'dealer's' office, three fragile-looking women sit on a bench in a dark and dingy office. The dealer tells our American to-be dad that he has a new stock of girls just for him. Perhaps their stories deserve to be told, too. Perhaps we have seen enough Preity Zintas or Kriti Sanons luring in wanna-be parents with their dancing skills... full review

So-So, by Jyoti Kanyal, india today : ...Mimi is a great attempt at bringing a social taboo like surrogacy to the centre stage. However, in trying to make it more entertaining and emotional, the makers lose a good opportunity. The film has some really funny scenes, and if melodrama is something you don't mind, you should definitely give Mimi one watch.... full review

So-So, by Vaishali Jain, India TV : ...In all, Mimi is a well-intentioned, feel-good and sympathetic take on surrogacy, which also talks about its repercussions. It tries to steer people to adoption too but its bucolic appearance can add to the cesspool of fallacious facts about surrogacy and adoption. It's a film you watch for entertainment, not something you take lessons from... full review

So-So, by R.M. VIJAYAKAR, India West : ...A.R. Rahman’s background score is routine but decent, but the songs are disappointing, except for the superb (and extremely well-written by Amitabh Bhattacharya) “Param Sundari.”... full review

So-So, by Ambica Sachin, Khaleej Times : ...Mimi’s real worth lies in this messaging, which might have got lost in the comic interlude between the characters, but is nevertheless the most brutal take-away from this comedy-drama.... full review

So-So, by Saibal Chatterjee, NDTV : ...In parts of Mimi are watchable, it is solely because of the actors. Kriti Sanon delivers a healthy performance, but the film isn't a bundle of joy.... full review

So-So, by Sukanya Verma, Rediff : ...Despite wishy-washy characterisations and easy conclusions to messy situations, Mimi scores in Kriti Sanon. The actress wholeheartedly transforms into a picture of ambition and attachment.... full review

So-So, Scroll.in : ...While Kriti Sanon turns on the spark, Pankaj Tripathi is a warm and welcome presence as the comical and genial Bhanu. Sai Tamhankar is underutilised as Mimi’s loyal friend Shama. Supriya Pathak and Manoj Pahwa are rolled in to pad a movie which, despite additions but accoutrements, remains thin on the more troubling aspects of surroga... full review

So-So, yahoo! India : ...Mimi has its flashes of brilliance, like Manoj Pahwa as Mimi’s father hiding his grandson’s toy in his dhoti when the Americans threaten to take away the child. These firangis, I tell you. The music and songs are used sparingly. Rahman’s Rihaee de and Kailash Kher’s Choti si chiraiya are unusually evocative in the present day context when music in our films has become royally redundant.... full review

Thumbs down, by Deepa Gahlot, Deepa Gahlot : ...Kriti Sanon (dressed in designer ethnic chic), must have thought that a female-centric film would be good for her career, but she brings nothing to it except enthusiasm and glamour. If it weren’t for Pankaj Tripathi expertly shouldering the comic as well as emotional scenes, Mimi would have been quite unwatchable. If you missed the credits, you wouldn’t believe the insipid music was by A.R. Rahman.... full review

Thumbs down, by Rahul Desai, Film Companion : ...Lightweight movies like Mimi speak about life while simultaneously shying away from it. The presence of artists like Tripathi and Rahman may lift a moment or three. But it also suggests that they’re merely narrative surrogates for a film struggling to conceive a life of its own.... full review

Thumbs down, by Anupama Chopra, Film Companion : ...Mimi is content to operate at a simplistic, superficial level. Laxman puts together a roster of terrific actors – Pankaj Tripathi, Supriya Pathak, Manoj Pahwa and Sai Tamhankar – but he doesn’t give them enough to do. As usual, Pankaj is the best thing in the film, working hard to infuse more life and layers into Bhanu. But Mimi rests on Kriti’s shoulders. She also works hard – putting on weight, working with a Rajasthani accent. In the climax, she is able to summon a wellspring of emotion but largely, her efforts are undermined by the script and her own inability to let go of synthetic Bollywood glamour. Even when Mimi is screaming in pain during childbirth, her lipstick is in place.... full review

Thumbs down, by Shantanu Ray Chaudhuri, Free Press Journal : ...Not even A.R. Rahman’s score can rescue the film — the compositions as lacklustre as the film is banal.... full review

Thumbs down, by Shubhra Gupta, indian express : ...That the film has a clutch of solid acting talent — Supriya Pathak, Manoj Pahwa, Pankaj Tripathi and Sai Tamhankar — gives you hope. And the theme itself has an emotive pull: who does a child belong to, the woman who gives him birth, or the one who raises him as her own? The moral and ethical questions arising out of a surrogate birth are ones we are still unravelling. Nature, or nurture? The question never gets old.... full review

Thumbs down, by Mayank Shekhar, MiD DAY : ...And there’s AR Rahman on the soundtrack. He’s an era, not just a musician. Which means, will have to listen to this score a few times over (which is the only way to appreciate his music). Hopefully, the memory of this picture doesn’t haunt much.... full review

Thumbs down, by Stutee Ghosh, The Quint : ...It’s the kind of stubborn narrative that simply refuses to look at any other perspective apart from upholding its own message, that proves to be its undoing. That a woman only wants to be a mother and would happily give up on all her dreams is the kind of patriarchal fantasy that Mimi dangerously perpetuates without ever coming across as convincing. Why would someone, who was ready to go to the extent of being a surrogate simply to fund her acting dreams, never once regret her decision? Is motherhood all about cuddles and toys? The conflict and its resolution is both predictable and laughable in equal measure. It’s sad that Mimi reduces its titular character to a stereotype that never feels authentic.... full review

Dear Meetu, I was about to write you to review this film, and as if you heard my vibe voice, and here is your balanced review. I loved reading it, otherwise many reviews are (as usual) too biased for over the top ratings..! Your review makes the most sense as someone who sees and enjoys things beyond cinematic language that appease masses.. Bravo..!

Raj has given this movie a Yay! Thumbs Up(A Good Watch, well made movie..!). Raj has posted 81 comments and has rated 49 movies. See Raj's page for more details.
meeta

@Raj Thank you thank you!