Arranged Marriage 101. A decent bird-eye view of the concept. Once you get an idea, though, boring. (Available on Netflix)

When a film is realistic there could be resonation with the characters. And it could bring the boredom that comes from having been there, done that. Meenakshi Sundareshwar gently glides from being relatable to boring.

While her Rajnikant mimicry brought a smile, her embodiment of a Rajni-worshiper is something I will remember every time I think of this film.

It started by making me nostalgic about having to clandestinely hold my husband’s hand in public. And ended with me being totally disconnected from whatever was going on. Not because I have almost 25 years of lived experience under my belt. But because, within just a year of this couple’s marriage, the movie jumped from one uninteresting situation to another forced one, that too predictably.

I rubbished the thought that I felt distanced because of the Tamilian setting as soon as I questioned myself. This arranged marriage seems as universal as arranged marriages could be. The yearning to know the stranger who is also your life partner; the invaluable extra hug between a new couple; the familial bickering; the misunderstandings that come with any relationship, let alone a long-distance one—are hardly new or specific to any region. Arguably they are true of non-arranged marriages too.

In fact, the regional setting seems to serve another specific function—that of adding texture to an otherwise bland story. Of course, great service is done to Hindi cinema by not making caricatures out of the characters’ origins. And also by choosing a region that is mostly ignored by the industry.

I thoroughly enjoyed actors slipping in and out of Tamil as they spoke. It helped keep things in sync with the setting. Though I can hardly be a judge, it wouldn’t be surprising if they got most of the accent wrong. I know for sure none of the characters carried an accent while speaking Hindi or English like people do in real life. But hey, they tried. Imagine otherwise, we would be in Rajni-land with all-Hindi-speaking people. Just like it is better to have non-Bombayites try Bombaiyya rather than have them speak in only one clean language through a 140-minute film. 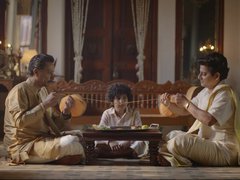 At the same time, once the novelty wears out, you realise that ultimately the film banks on stereotypes, just different ones. The Hindi-film references are replaced by Tamil-film ones. The lungi is highlighted, though with respect instead of ridicule. And so on.

Once you see through this superficial layer, you are left with characters doing mundane things like struggling with notorious in-laws/bosses turning it into a family soap opera—without the dramatics, but still pretty dull.

Sure, the love story is fairly charming, and the goofy and/or relatable situations are mildly entertaining. I thoroughly enjoyed the music and after a long while I will be listening to the songs of a Hindi film. The arrangement in the film’s screenplay is adorable and quirky, even if misplaced.

However, much of the heavy-lifting is done by the actors and their chemistry with each other. The lead pair’s awkward, fumbling relationship is believable. But even more genuine is the amicable one between Meenakshi (Sanya Malhotra) and her college friend, Ananthan (Varun Shashi Rao).

Abhimanyu Dassani is heartwarming with his coy, good-boy Sundareshwar. He presents the stereotypical software engineer to the audience without making it look like a stereotype. Sanya Malhotra transitions from a warm friend to a naughty wife to a dutiful new bride like any good family’s daughter-in-law worth her salt. eye roll While her Rajnikant mimicry brought a smile, her embodiment of a Rajni-worshiper is something I will remember every time I think of this film.

Now, should they have been played by Tamilians in real life gets us into a murky discussion, doesn’t it? Then, Amitabh Bachchan would have to always play an Allahbadi, and Konkona Sen Sharma, only a Sen-Sharma combination. You see where I am going with this. I am glad how this turned out, given the material.

Now, that the material itself wasn’t strong enough to hold our interest through and through is neither the fault of the actors’ origins nor that of the Madurai setting. It is just the fizzling out of an idea that seemed to be banking too heavily on the generalised South India novelty in Hindi films.

Thumbs up, by Sameer Ahire, Movie Talkies : ...Sanya, on the other side, runs a riot of her own. That carefree and happy-go-lucky girl is very well played by her.... full review

Thumbs up, by Sukanya Verma, Rediff : ...Not all its wit lands... full review

So-So, by Madhuri V, Filmi Beat : ...Abhimanyu Dassani...is the most fun to watch when he is being timorous on screen.... full review

So-So, by Shubhra Gupta, indian express : ...But where the film falters is not giving us a believable conflict.... full review

So-So, by Srijita Sen, MSN Entertainment : ...While long-distance arranged marriages as a subject might not have been explored enough in Bollywood films, the concept of love and separation has been done to death.... full review

So-So, by Saibal Chatterjee, NDTV : ...The two principal characters do not rave and rant - most of their communication takes place through electronic means - nor do their parents and siblings.... full review

So-So, by Poulomi Das, News N9ne : ...It's a familiar, predictable turn of events, executed for the most part, with ample charm and sincerity.... full review

So-So, by Sanjana Jadhav, Pinkvilla : ...Sanya and Abhimanyu make for a good looking onscreen pair and their chemistry also is relatable given their arranged marriage set up and circumstances.... full review

So-So, by Hiren Kotwani, Times of India : ...taken the road less travelled by opting for a subject like this, on long-distance relationships, and how the protagonists enjoy the few ups and cope with the many downs.... full review

Thumbs down, by Prathyush Parasuraman, Film Companion : ...Meenakshi Sundareshwar So Preoccupied With Sweetness, It Forgets To Be Anything Else... full review

Thumbs down, by Anna MM Vetticad, FirstPost : ...Both actors and the lovely supporting artistes are left scrambling for an anchor though as the storytelling gradually becomes lifeless... full review

Thumbs down, by Shantanu Ray Chaudhuri, Free Press Journal : ...The filmmakers, however, make the cardinal sin of forgetting that whimsy can carry a narrative only so far – and definitely cannot stand in for good old conflict in a film that runs 142 minutes... full review

Thumbs down, by Namrata Joshi, National Herald : ...While Sanya makes a convincing Rajinikanth fan, the whole homage to him, Dhanush and Nayanthara, doesn’t add anything to the film, rather takes away from the core.... full review

Thumbs down, by Nandini Ramnath, Scroll.in : ...embraces the stereotype and then tries to subvert it with a zeal that can only be admired.... full review

Thumbs down, by Stutee Ghosh, The Quint : ...Snoozefest With Leads With Zero Chemistry... full review

Dear Meetu, such a super review - frothy and made us feel like experiencing watching the movie with YOU.. I love the way you write your reviews. Just love it. That's why I am your earnest reader who visit WOGMA..! Thanks..!

Raj has given this movie a Want to Watch(I liked the Rajnikant bit..!). Raj has posted 99 comments and has rated 67 movies. See Raj's page for more details.
meeta