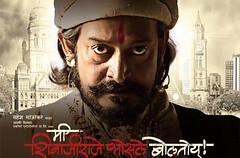 Rock-solid dialogues in conveniently placed situations. Will certainly appeal to the Marathi Manoos.

Will this film tug the Marathi Manoos' patriotic strings with precision? Oh yeah!.
Did it work for me? Well, not in entirety.

Because I'm not the target audience, here. I don't belong to the community that feels marginalized. And that's my biggest complaint against the film. A film with such a strong belief in what it's saying, it could have appealed to a larger audience. So strong is the Marathi flavor that replace this community with another one and it won't work for the Marathi community. This feeling of impotency that one community feels can be easily extrapolated to various segments of society. Sure, there are enough communities other than the Marathas who feel similar aggravation - the situation might be different, but the powerless feeling is similar.

Sure, the film talks of the Marathi populace's helplessness as their own doing, and that no one really stopped them from achieving their potential. But this comes and goes away ever so slightly that amongst all the strong dialogues it feels very mild and almost irrelevant. Not to mention that the stereotyping in the first place is heavily exaggerated.

These among a few other lesser important things is why the movie doesn't work. Despite the enthusiasm vibrating in the theater. Despite the sloganeering that hushes quickly, so they don't miss the next powerful dialogue. The dialogues and situations are inspiring alright, but will they inspire after one is out of the theater? Unlikely.

Because the situations are ultra-unrealistic, the solutions are utopian and over-simplistic. There is no way even a fraction of the solutions implied are workable. Here, the Lage Raho Munnabhai meets Rang De Basanti approach fails because it lacks the former's adaptability and the latter's universal appeal.

Almost all the performances are theatrical and you feel like you are watching a play. The staged feeling doesn't leave you for too long. Though, a couple of father-daughter scenes are handled with sensitivity and bring that lump in the throat.

Yet, the film's strongest points remain its theatrical dialogues and Marathi Bana style delivery. The strong folk flavor to the music compliments the sentiment of the film too. all together keeps you attentive and entertained. They are dramatic and yet they work. And let me remind you that this is coming from a person who has no patience for over-dramatization and on-the-face loudness. With the strength of its dialogues it engages me in the drama and keeps me there.

However, it doesn't get me involved. I still feel like an outsider, unable to relate to or replace any situation with what I've experienced or heard of. Maybe, I've been blessed with environments where I've never been stereotyped against. The film also made me wonder if there is any community I feel a sense of belonging towards. Couldn't think of any. Except maybe women. Maybe, some day a moviemaker will make a movie about the marginalization against reviewers and I'll feel like hooting and whistling from the audience. Yeah, yeah, I know the irony.

The contradiction in first serving us the hyperbolic, sorry state of the Marathi population and then repeatedly listing one Maharastrian achiever after another in every field is annoying. And at the same time the attempt to replace the word Maratha (from the Marathi community) with Maharastriya (Maharastrian - as in a resident of a state) is commendable but again very subtle amongst the other overwhelming furor doing the rounds.

Every minute of Mr. Bhosale's (Sachin Khedekar) life, he is reminded of what a loser he is because he is a Maharashtrian. He reaches the point of frustration where inspiration strikes and he compels himself and his family to take charge of their lives.