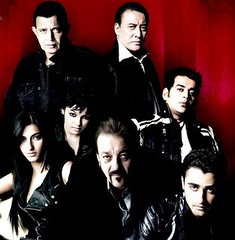 There’s no way this cast can disappoint in serious drama. But drama disappointed coz it takes its time to build & thrillers can’t drag

Maharathi serves more as a slap on the face of all those people who use Paresh Rawal, Boman Irani and even Om Puri in mindless slapstick. And rightly so. These men are capable of so much more than the average script they take up. Alas, the thriller doesn’t chill the spine.

The anxiety doesn’t build-up because each frame is given that little extra time to linger, each character that extra moment to make roots in our minds, each actor that extra moment to shine. Except in that one-off case, the senses are stimulated and then given a breather which kills the suspense.

Also, I find the thrillers that go back-and-forth-and-back-again very tiring. Not because I have to keep track of the turn and re-turn of the events, but because it gives a feeling of ‘we are trying to hard to thrill you, you better sit on the edge now.’

To add to this, only one aspect of each character is exposed to screen. The others we are either blind to or left half-baked. So when you don’t know if the scheming mind himself wants the loot or not, you wouldn’t know who to root for. Sure, you don’t always need someone to cheer, ok, give me someone to get frustrated with, angry at.

Yet, when you see Naseerudin Shah, Paresh Rawal, and Boman Irani fill the screen in tight close-ups taking this one chance to show their mettle you want to forgive everything. It’s as much credit to them as it is to Neha Dhupia that she can stand tall before them and treat their characters as trash (the way its intended to).

And yet, a movie with such talent (even if you keep Neha Dhupia out of the equation) at its disposal and them living up to it too, cannot evoke any kind of emotion, is rather disheartening. Moreover, at it heart, the premise arouses a good deal of curiosity. So, maybe, that extra something they went for through a-moment-longer-than necessary pauses, caused the damage.

Thumbs up, by Martin D'Souza, Glamsham.com : ...MAHARATHI is an out and out Paresh Rawal fare.... full review

Thumbs up, by Kaveree Bamzai, india today : ...Maharathi is a movie which allows you to revel in the acting chops on display.... full review

Thumbs up, by Siddharth Pillai, Passion for Cinema : ...The effectiveness of ‘Maharathi’ is full credit to the subtle inventiveness of Nair and crew.... full review

Thumbs up, by Harshita Kohli, StarBoxOffice : ...He has turned a very popular play into what can become an equally popular movie.... full review

Thumbs up, by Nikhat Kazmi, Times of India : ...There are enough turns and twists in the plot to keep you in nail-biting mode,... full review

So-So, by Nikhil Kumar, Apun Ka Choice : ...Despite such a talented ensemble, director Shivam Nair botches up ‘Maharathi’ with his shoddy direction, giving you only a few edge-of-the-seat moments in this thanda thriller.... full review

So-So, Business of Cinema : ...The film's treatment is commendable, the editing is a different story.... full review

So-So, by Taran Adarsh, IndiaFM : ...There's no place for songs in the film and the sole track towards the end -- the promotional number -- looks out of place.... full review

So-So, indiainfo.com : ...It rises above the run-of-the-mill thriller primarily because of clever narration of the story... full review

So-So, by Gaurav Malani, indiatimes : ...The plot that starts off promisingly is flawed by few loopholes.... full review

So-So, Movie Talkies : ...The real acting honors in the film, however, are shared by Paresh Rawal and Boman Irani, both of who deliver seamless performances.... full review

So-So, by Mayank Shekhar, Mumbai Mirror : ...There is no cinematic thrill to this thriller.... full review

So-So, by Jivraj Burman, Now Running.com : ...The surprise of "Maharathi," undoubtedly, is Neha Dhupia. As a ruthless, greedy housewife, she shows some spark of histrionics one never thought she was gifted with.... full review

So-So, by Sonia Chopra, Sify Movies : ...Consider Maharathi if you’re in the mood for an unhurried thriller with some remarkable performances.... full review

Thumbs down, by Khalid Mohamed, Hindustan Times : ...What this adaptation is striving to state or how it’s entertaining you remains an Agatha Christie-like mystery.... full review

Thumbs down, by Jahan Bakshi, Now Running.com : ...This was a script crying out for a better cinematic adaptation.... full review

Thumbs down, by Patcy N, Rediff : ...Om Puri's talent is wasted -- he has only three scenes in the film.... full review

Thumbs down, by Filmbear, Upper Stall : ...Maharathi is a huge disappointment for everyone who was waiting for performance sparks to fly and is a boring film to boot.... full review

A scheming wife (Neha Dhupia) wants her husband (Naseeruddin Shah) dead. She finds a partner to help her with this.

There's a difference between a film-noir and a thriller.