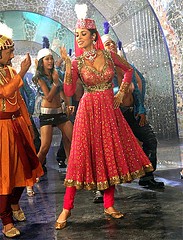 Please forgive me because I’m making you read this - Kay Kay & Rahul Bose are part of a trashy slapstick.

I just witnessed Kay Kay Menon and Rahul Bose do an Om Puri. As if it wasn’t trauma enough to see Om Puri perform like a monkey in movies like Buddha Mar Gaya and Mere Baap Pehle Aap now we have to suffer the heart-break of Kay Kay Menon and Rahul Bose being loud and over-the-top, and shamelessly so. How much more torture is this industry capable of?

The thing is that they were not bad performances considering the wisdom that slapsticky performances are supposed to be this way. But, I really wish we were not exposed to this versatility that they are capable of. True, Rahul Bose isn’t the greatest performer around, but Kay Kay….

Just because I had great regard for the script choices that these two make, I was giving the many Mallika Sherawat sleazy dance numbers and scenes a benefit of doubt. Thinking, maybe the script really demands it. Till, I was proved wrong by Mallika trying to seduce the audience with a straight look in the camera rather than sharing chemistry with her co-stars.

Under the pretext of being a satirical comment on the prevalence of slapstick in Hindi cinema, Maan Gaye Mughal-E-Azam ends up adding one more to the “crappy movies” list. It starts out trying to be sarcastic about the dismal political and administrative condition of this country. But satisfies itself with just scratching the surface. There is no intention of delving any deeper or ruffling any feathers.

And what was all the mockery of Urdu, Mughal-e-azam, Jaane bhi do yaaro for? As far as I know, mockery is done by someone who thinks they are superior to the things they are ridiculing. Now really? Can anyone have such an inflated opinion of themselves? Especially when they are involved with a product like this?

While I go balm my hurt, cinema-crazy soul, and in general, get over what I just went through, I seriously hope you were saved from having to bear this.

A drama company trying to use the medium of theater to make a satirical comment on the country’s state of affairs.

Pointing out anything here could imply that things not mentioned here might have worked well. I just can’t take that risk.

Comedy king Paresh Rawal on the loose. Supported by Kay Kay Menon, in a role probably that does not suit him. All the others are passable, could be replaced by any other actor and would not have made any impact in any way. It is a Paresh Rawal show all the way.

And Paresh Rawal entertains and makes us laugh as only he can. Brilliantly natural, impeccable timing, straight faced even in the funniest of situations: this guy is a master.

The plot of course is nonsense no-brainer excuse to build up a story based on non-stop gags. Mallika Sherawat is thrown in for the oomph factor, but she did surprise me with her comic bone.