wogma rating: Watch if you have nothing better to do (?) - or if you are a cinephile

Akhtar and Banerjee seem to expose their empathetic grasp of the human condition, while Kashyap and Johar seem to favor the scandalous over the subtle.

Densely lined with innumerable landmines of pulpy romance, the Bollywood mainstream is a dangerous territory to tread. One must explore with caution, for every step you take – or rather, every film that releases – brings with it an explosion of mush, prem, louve, and pyaar. Soulful, everlasting, Janmon janmon ka pyar. Pious, Amar Prem. Or naughty Ishq Wala Love. But not lust. Because that is the mainstay of villains, vamps and itemgirls, the so called hawas ke pujaari or vasna ke darinde. And even though, of late, we have seen a few Hate Stories (four to be exact) and witnessed a single episode of Love Games, the much detested, derogatory and eyebrow-raising, haaaw-chhi word, Lust yet remained to be incorporated into a title.

That vacuum, ladies and gentleman, has now been filled by an anthology film made by four Bollywood A-listers: Karan Johar, Zoya Akhtar, Dibakar Banerjee, and Anurag Kashyap. Titled Lust Stories, their labor of (ahem!) louve has been quietly released on Netflix yesterday, and not in a theater near you. Why on Netflix though? Was it to escape censor board atrocities, or was it to NOT be seen as sleazy in the public eye, most of which is quick to judge? We still await a public statement from the filmmakers.

Nevertheless, leaving behind the cushy territory of Bollywood romance, Lust Stories takes its characters into semi-dark intimate spaces conflicted by the polar pull of love and lust. - The first story (by Anurag Kashyap) explains this conflict through an extended soliloquy on ownership.
- The second one responds to its overt predecessor by keeping it mute through the sheer inability of its characters to exercise ownership (Zoya Akhtar).
- The third short tackles the subject of emancipation through the quiet and willful acceptance of desire (Dibakar Banerjee), and
- the fourth, in turn, throws desire in your face (Karan Johar). From making a career out of telling persuasive stories about unrequited love, Johar is now talking about unrequited desire. But his signature loudness and perverse referencing to popular culture remains. 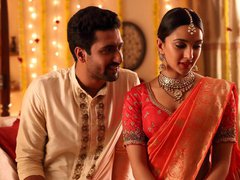 However, the novelty of Lust Stories lies in keeping it short. (So, you and I are saved a 3-hour long musical extravaganza) Of these four, the ones by Akhtar and Banerjee are the most impactful and leave you thinking. The performances are subtle but stay with you. These two directors also bring you much closer to the intimacy that the characters share. In their stories, sexual contact between the characters exposes a lot more about their psyche than when the characters are out of the bedroom. And that's where the title, Lust Stories seems justified. Desire is integral to a character's mental make-up, and its expression is formative in establishing our understanding and perception of a character.

Strangely though, Kashyap chooses to stay away from depicting physical intimacy. And, Johar, on the other hand paints unrequited rather vividly, literally, and repeatedly. 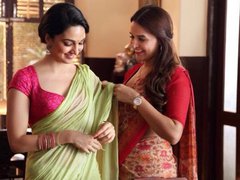 So, while Akhtar and Banerjee seem to expose their empathetic grasp of the human condition, and come out as much stronger filmmakers by simply leaving a lot to be read between the lines, Kashyap and Johar seem to favor the scandalous over the subtle, both through the treatment of their subject-matter and by making some lazy casting choices – except for Kiara Advani who is uber-confident and rather apt in her part in Johar’s segment.

Kashyap's approach is overtly verbose and seeks sensationalism by casting a fiery Radhika Apte opposite naive, Marathi mulga, Akash Thosar of Sairat – as if the screen would sizzle by putting hot and cold side by side. Johar seeks sensationalism through the usual stereotyping, wherein a girl's coming of age is implied by dropping neck-lines and falling pallus, and where in order to be strong and independent, a character must first ooze oomph a la Neha Dhupia. Not that I didn't like her. But just for argument's sake, I was wondering why did Kashyap not cast Bhumi Pednekar in place of Apte or Karan cast her in place of Dhupia? That way, they both would have had some real work to do than just picking characters already modelled by actors and their public image.

The same holds true for male characters. While Neil Bhoopalam, Jaideep Ahlawat and Sanjay Kapoor bring novelty and conviction to their parts, Akash Thosar and Vicky Kaushal, albeit sincere, seem to be the extended versions of their previous roles in Sairat and Raazi respectively. Put together, these things make Lust Stories a 50-50 bargain – with a strong core but weak ends. But then, isn't a good burger defined by the wholesomeness of its patty, its core. Because the outer layer, the buns, are all the same.

My verdict: you might as well see it, if it’s on Netflix, and no big loss if you don’t have Netflix, though you will miss witnessing the sensitivity of Akhtar and Banerjee as filmmakers. Their terse, simple and thought-provoking narratives are significant landmarks in their repertoire as filmmakers, and important milestones in our journey as desi-cinephiles.

Want to Watch, by TimELiebe : Slightly Want To Watch - This Is Far From a Glowing Review, Though Good Enough to Give It a Watch

Yay! Thumbs Up, by Ajay Patel

Sounds closer to the former than the latter, even if it's far from perfect....

TimELiebe has given this movie a Want to Watch(Slightly Want To Watch - This Is Far From a Glowing Review, Though Good Enough to Give It a Watch). TimELiebe has posted 434 comments and has rated 179 movies. See TimELiebe's page for more details.
Roy J

Zoya's story was my favorite. Though, I did enjoy the movie ending on a lighter and funny story like Johar's rather than Banerjee. Good pass time for a lazy day.

moviefan has given this movie a Yay! Thumbs Up. moviefan has posted 23 comments and has rated 13 movies. See moviefan's page for more details.