A story that you wish were true. Execution that is real and poetic. Touches dark themes without making light of them and without heavy-handed writing. Had me in awe of its simplicity for long after it was done.

What a beautiful piece of cinema did I just watch! Keeping things real while not letting them become dreary is no mean task. Touching upon various social issues without obviously holding a huge mirror to society is a class act. Even if Is Love Enough? Sir did not do these bits well just seeing it avoid the obvious class-divide route was refreshing.

Despite being a movie that is completely enjoying and owning its slow pace, Is Love Enough? Sir rarely allows your attention to slip away.

Yep, the film does not paint all rich people as mean and all poor people as saints. It avoids the other trope too—the one nice rich person or the one nasty poor person inserted as an exception—to either prove the rule or give the makers the false security of not having stereotypical characters through and through.

Characters just are. They are a product of their situation. Ashwin (Vivek Gomber) plays the US-returned empathetic employer to perfection. Kanta (Tillotama Shome) holds her own as an employee, a ‘servant’ even when she’s vulnerable. She doesn’t feel obligated while still staying grateful. Of course, all the great writing is brought to fruition owing to some aptly measured performances.

All characters are extremely relatable, even the ones with smaller roles. Hopefully, you are like Ashwin who doesn’t look down upon people with access to fewer means than him. If not, you know someone like him. You know someone who loses their cool with their domestic help. You know someone who is like Ashwin but knows there are boundaries. You also hopefully have met non-privileged people to recognise them in Kanta. Even if you haven’t met a mean old man taking advantage of Kanta’s labour, you can easily believe that he exists.

This proximity to reality makes Is Love Enough? Sir’s the charming film that it is. Especially endearing are the moments that the film draws out. Awkward silences, pregnant pauses feel perfect because of the situation that they are written in. An employer and employee getting stuck in an elevator, for instance. 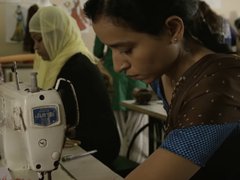 Such moments accentuate the film’s theme while staying subtle. And even though the class-divide theme is central to the story, it is only secondary in the film’s execution. At the same time, it brings a depth to the theme that other films lose out by over-writing. A lot of tiny details make this happen. I wouldn’t want to lose out on the film’s beauty by making an exhaustive list of such specifics. And it’d be a disservice to the ones that will be left out of the film.

The film is actually as much about the class-divide as it is about love. How often are you convinced that an on-screen couple is actually in love? What makes for a couple? My first thought is—one in which each edges the other to grow. And you can tell once they get over the differences, this couple will grow well together as human beings.

Characters just are. They are a product of their situation.

Despite being a movie that is completely enjoying and owning its slow pace, Is Love Enough? Sir rarely allows your attention to slip away. Of course, I was distracted for a bit by the huge quantities Kanta seemed to be cooking for one, at most two people. But, I assume that is just me being me.

The only other jerk was when the story moves a huge step ahead. It could be the deep-rooted thought-processes I carry. At the same time, I hold the incongruity with the otherwise gentle pace of the film responsible too. That jerky step was like someone hit a fast forward button without warning. Also, I wish it wasn’t given away in the trailer.

And yet neither of these bits were enough to take away from the film. Is Love Enough? Sir carries a serene air about it. And the climax wraps it up just perfectly.

Yay! Thumbs Up, by paresh Shah

Yay! Thumbs Up, by Raj : Will you permit yourself to let LOVE happen?

Nay! Thumbs Down, by Radha Krishnan : How about the me-too aspect?

Is it on netflix ? Or another online app ?

Yes, the movie is well made. But I am disappointed that nobody, neither Meeta here, nor other reviewers elsewhere, have even thought about the total impropriety of the imbalance of power - a maid in a house, her entire livelyhood at the whim of a man, having to fend off the approaches of that same man...? 30 years ago, or 10 years ago, this would not have been remarked on. But in today's world to treat this as a romantic story when it could well be one of abuse and oppression, is being tone deaf and color blind. And this is set in India, where the latter is more likely, by far, than the former. How many cases do you know of the maid being harassed, even raped, at home, compared to how many are respectful romances?

Spoiler Warning: This comment has content that will give the movie away
@Radha Krishnan It bothered me a lot when he pursued even when she persistently backed off. And I felt horrible that she had to change her life to get out of the situation. The unfairness was just gut-wrenching.

Until, the last scene, it was ambiguous whether or not she reciprocated his feelings. And that last scene settled that. Then I was fine in calling it a romance.

Meeta, I did not expect you to have seen this movie and it was so nice that not only you've seen the movie, and you have loved it and you have given a good review without letting the spoilers away - unlike Radha Krishna (from one who commented here) who only could say about POWER imbalance, harassments, exploitation and rape and not pure feel and learn about pure LOVE..!

Raj has given this movie a Yay! Thumbs Up(Will you permit yourself to let LOVE happen?). Raj has posted 76 comments and has rated 44 movies. See Raj's page for more details.
Raj

Raj has given this movie a Yay! Thumbs Up(Will you permit yourself to let LOVE happen?). Raj has posted 76 comments and has rated 44 movies. See Raj's page for more details.