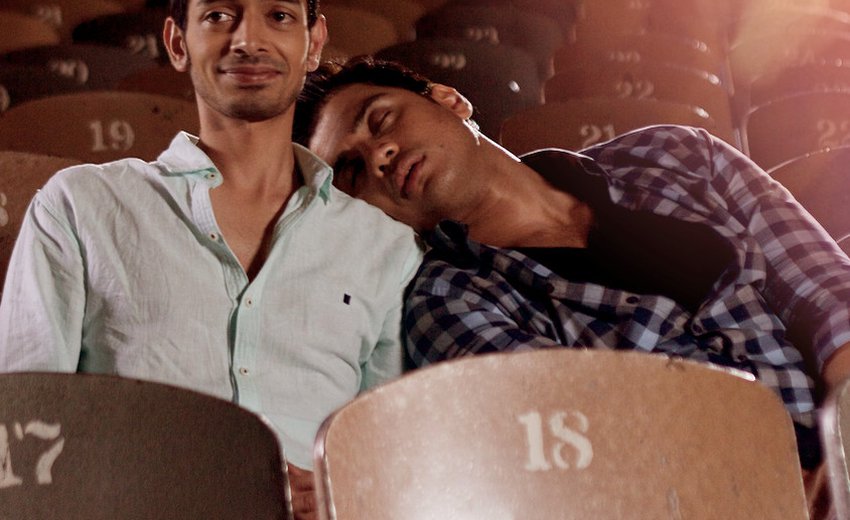 The film gradually and slowly unravels a triangular romantic equation between three young men. A good film and an important one, which needs to be supported and encouraged.

It is a challenge to distribute indie films in India. Seldom do they find a screening opportunity beyond a few film festivals. A case in point is Konkona Sen Sharma's directorial debut A Death in the Gunj (2016), which, even after being lauded across festivals, hasn't yet found a theatrical release.

I was also saddened to read that the movie had to be shot in secrecy because of the growing vigilantism against homosexuality in the country.

In such a scenario, when Netflix picks an even lesser known film like Loev, it is a moment to cherish. Yes, it isn't a theatrical release, but it is out and accessible. And that's what matters. (Netflix has got some more indie films in its collection, should you want to watch. These include Miss Lovely, Gandu and Brahman Naman, to name a few.)

Love can be complicated and Loev doesn't make any attempt to simplify it for you. It doesn't even set a pretext. Instead, it takes you straight to its protagonist, a shirtless young man, preparing for a road trip, harrowed by the forgetfulness of his flatmate.

Beginning there, the film gradually and slowly unravels a triangular romantic equation between three young men. And rather than dwelling on how they met or what may happen to them, Loev stays focused on the equation while using conversations as the key storytelling device to expose just enough details about these characters that seem to matter to the story.

In between these conversations, it takes pauses to glance at the lushness of idyllic settings. The film is shot on location in and around Mumbai (Wai and Mahabaleshwar) but manages to very cleverly avoid the cluttered touristic places with the use of high-angle long shots.

The mischievous spark in his big eyes symbolised youthful energy, and coupled with some really good acting skills, he expressed sincerity, boredom, uncertainty and pain effortlessly.

The cinematographer doesn't seem to meddle with the setting too much to get a perfect shot. It just lets nature be, and captures its vastness in an unhindered way by distancing the camera as much as possible.

Similarly, the director doesn't meddle with the characters too much, just lets them explore nature as well as, maybe, the nature of their relationship. Not much really happens. And am glad that the screenplay allows the men to wonder, wander, think and agonize more than I have seen in some other LGBT films.

But if it was just about platonic exploration, the film might have become boring. So, the director has thrown in ample amount of sexual tension to keep the audiences hooked. And in dealing with sexual tension, Loev doesn't succumb to clichéd homoerotic depictions (remember Dunno Why Na Jaane Kyun from 2010?). Instead, like old romantic movies, it weaves a profound atmosphere with threads of vulnerability, muted agony, and unrequited desire. Loev thus hinges mostly on the sublime side of love.

I say mostly because the carnal isn't completely ignored. It is included as a significant plot point, which, although tackles the burgeoning sexual tension, also gives rise to a muffled cacophony of diverse emotions. These were a little hard for me to fathom, so I felt lost a bit after this point. Luckily the story had already reached its denouement by this time, so the confusion didn’t last too long.

Nevertheless, the silence of idyllic pauses could still manage to ring through the layers of conflicting emotions, establishing that the true grit of Loev lies in echoes of those quiet moments.

The actors deserve to be appreciated, especially the two leads Shiv Pandit and late Dhruv Ganesh. I had noticed Shiv in Shaitan (2011) where he had held his own among a rather skilled ensemble cast that included Kalki Koechlin, Kirti Kulhari (Pink), Niel Bhoopalam ([24]) and Gulshan Devaiah (Hunterrr).

I haven't seen any other work of Dhruv Ganesh. It was heartbreaking to learn that he passed away before the release of this film. The mischievous spark in his big eyes symbolised youthful energy, and coupled with some really good acting skills, he expressed sincerity, boredom, uncertainty and pain effortlessly. He was superbly talented. What a loss!

I was also saddened to read that the movie had to be shot in secrecy because of the growing vigilantism against homosexuality in the country.

Loev is a good film but given this news piece, it becomes an important film, which needs to be supported and encouraged. However, if you still live in denial of same-sex romance, it may not be an easy watch. So, do exercise your caution.

So-So, by Parind : Great but vague!

---Warning: SPOILERS---
Kudos to the team for a great movie and applause to everyone who worked to see it reach Netflix. I loved watching it!

But there were some scenes that were so vague in the movie. [Comment partially deleted because it gives a part of the movie away] Also, there's a mention of a woman in discussion between Jai and Sahil; without even mentioning who she is and what about her. I agree with you that there's no "introduction" to characters whatsoever and one may just have to assume the relationship or dynamics between the three of them.

I finished watching it with more questions than at the beginning.

Parind has given this movie a So-So(Great but vague!). Parind has posted 1 comments and has rated 1 movies. See Parind's page for more details.