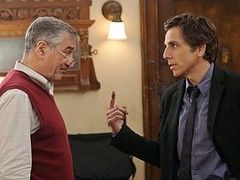 Gaylord Focker and Jack Byrnes have a difference of opinion on how a patriarch should be. There are no great situations, but a couple of good lines here and there may give you a laugh. Do not compare to the predecessors, because sequels are almost always worse than the originals.

‘Sequels are worse than the originals’ – is a clichéd statement. And so is Little Fockers. The story line is filled with the same old fight between two patriarchs over what the family culture should be like. Egos clash, and that makes life hard for Greg Focker and his family. The miscommunication and unbending attitudes in a relationship takes a toll on the family. But in a supposedly funny way. So even if each of us can’t identify with the situations, we can definitely identify with the reactions.

There is very little of Little Fockers in this movie, though they are present all the time. The twins, Samantha (played by Daisy Tahan) and Henry (Colin Baiocchi), don’t look like twins but do justice to smart-kid and silly-kid roles respectively. And though this film is more about adults and their problems, the director has managed to drag in the kids on all occasions.

Acting is generally mediocre. Ben Stiller is good, fed up of the father-in-law trying to bully him. He and Robert De Niro put up a good duet in the given situations. I was expecting much more screen time from Dustin Hoffman and Barbra Steisand, but looks like Dustin Hoffman didn’t like the script and accepted to shoot only 6 scenes. Well, after the movie I feel he was right. Jessica Alba obviously looks great – so if you are a fan you may want to catch this film.

Some of the jokes are good, though there are also some irritating old ones. The best part is the slight flavor of The Godfather and Jaws. Just the right amount of reference was given which reassured me that this was not a spoof, and yet enough to make me smile remembering the classics. Although, it has one of the most uninteresting closing scenes ever. I mean, ending on a good note or a bad note is one thing. But an end which almost bores the audience, what sense does that make?

The film certainly misses the hilarious situations that Meet The Parents and even Meet The Fockers had. So try not to compare if you want to have a laugh. Catch on a TV if you are really out of options. An empty mind might help getting over the frustration of ‘why on earth did they make such a film?!’

Yay! Thumbs Up, by Bryon : I think it is as good or better than the first Meet the Parents