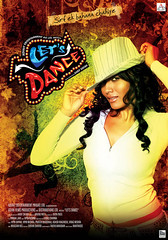 The main story and the various sub-plots are interesting, but unfortunately lack punch. The narrative is as flat. Nothing out-of-the-ordinary happens and you are left dissatisfied with the build-up and finale. The choreography and dances are nothing to swear by either. Some capable new actors brought on board though.

an unknown cast and makers, there's not too much the audience goes in expecting. A movie called Let's Dance the only thing, I guess you think you might catch a glimpse of are some new moves. Unfortunately there isn't anything spectacular or graceful about the choreography or the dancer. It ain't bad either, just the regular fare.

I actually admired how the actor playing the protagonist, Gayatri Patel didn't come across as stunning or gorgeous. She is actually short and not stout but could be considered so compared to the other model-turned-actresses of today. She and most of the other cast had a very regular mannerism of talking except for Anjan Srivastav whose lines were delivered a little exaggerated. The cast otherwise looked like normal people going about their daily lives. This could also translate to boring.

The official website boasts of six-year old Nikuunj Pandey as being "by far the most experienced actor in let's dance." Okay, there's it'd have been great fun to make full use of that information to trash the other actor's capabilities. But other than Aquib Afzaal's and Gayatri's accents the cast actually does a pretty decent job. And there is a non-trivial attempt at masking them accents too. All the actors bring across the character's traits. Aquib's attitude, Gayatri's sincerity, Ajay Chaudhary's chocolate boyishness, Master Abhaas Yadav's simmering frustration, and Sugandha Garg's practical approach to life - all add to the facets of the story.

Unfortunately though the story doesn't move forward much, and when it does, it stays there for so long that it feels like no progress has been made. There are a few interesting elements in both the main and the sub-plots but they are extremely predictable. So, when the expected happens it is the usual feeling of anti-climax. It doesn't feel like the sort-of conflict leads anywhere because of the forgone conclusion. The transformations and events are all too convenient and basically a cop-out.

If at all a little more was put in, in terms of creating an engrossing atmosphere, this film could have triggered a little interest. Alas, a good-natured plot and well-meaning characters can take a film only so far.

So-So, by Martin D'Souza, Glamsham.com : ...There are flaws but the whole feel of the movie compensates for it... full review

So-So, Movie Talkies : ...What is missing is the need for better actors and more support from a better technical team.... full review

So-So, by Nikhat Kazmi, Times of India : ...The film is actually sweet and sensitive and gently tugs at your heart... full review

Thumbs down, by Abhishek Mande, Buzz18 : ...The movie itself is a lesson in how films should not be made.... full review

Thumbs down, by Gaurav Malani, indiatimes : ...The film is high on dance but low on emotional connect.... full review

Thumbs down, by Ashok Nayak, Now Running.com : ...Nothing is worth a watch in Lets Dance... full review

Thumbs down, by Elvis D'Silva, Rediff : ...Let's Dance takes on the complexion of a Boogie Woogie marathon... full review

Thumbs down, by Janhvi Patel, StarBoxOffice : ...The music is a plus point... full review