The whole is lesser than the sum of the parts, especially if you want a story that goes beyond a broad stroke.

The could'ves, would'ves, should'ves of life. Should I have taken up that interesting but lower-paying job instead of this higher paying, soul-sucking one? Could I have done something more to avoid that breakup? Would any of it have mattered? La La Land aims to approach these questions but brings them up a little too late in the film. Till then, it has other things on agenda - a lot of other things - that all distract from each other.

I have lost hope in finding any surprises in love stories.

The all-encompassing theme is retro. All along, La La Land wants to doff its hat to Hollywood from decades ago, to romance from those times. It never lets you forget what it wants to pay a tribute to – if talk about the dying interest in jazz doesn't pass the message, it reminds you through costumes and so on. This is along with the omnipresent 50s-style texture that the film carries.

Of course, La La Land continues this homage with the romantic story that has touches of a musical – especially since the latter is becoming such a rarity. However, here it doesn't go all out. The music drops in the background as the film progresses into its second hour.

The story itself broadly follows the path of any romantic relationship's arc – the initial excitement, the spring in the step, the bright and sunny days, next comes the fall with a drop into a cold wintery night. Whether it stays there or not is immaterial given there are only one of those two outcomes possible. I have lost hope in finding any surprises in love stories. My issue is with the broad stroke. While I don't want to live with the couple through each defining moment of their relationship, I wanted more insight about their motivations, a deeper look.

It is strange that I know what the making or breaking points were in the relationship. But, there is a gap of how exactly they got there, that left me unconvinced. That La La Land is also about the clichéd yet constant see-saw at play between “following your dream” and “being practical” takes away from the romance that a musical brings. It doesn't help that there isn't much power in the dialogue. Except for the once when it goes meta about not worrying about what people think when it comes to following one's passion - the writer/director's passion for the era gone-by is in plain sight, after all. 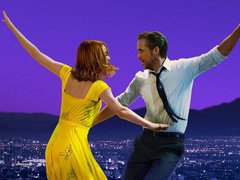 While the lack of detail in the story is a big shortcoming, a lot of it is compensated by Ryan Gosling and Emma Stone. Not just their presence, but because of who they make you believe they are. From the first time Sebastian (Ryan Gosling) talks about jazz, you know he could do anything for jazz. And then you see him fall in love and change the definition of his passion. Emma Stone takes your breath away every time her character, Mia auditions for a bit role, especially the first time around. Emma makes you believe Mia is giving it everything she has even though she is frustrated.

These two aren't the best pair in the film though. The other couple - the camerawork and editing – give the film a huge lift too. The camera, with its long, long shots, moves as lyrically as the songs. The smooth, rhythmic cuts dance in sync with the tune. All put together, the look and feel of the 50s is undeniable. However, I don't see why I should see a film that wants to remind me of films from the 50s, when I could as easily see the films from the 50s! Then instead of an out-of-context, old-school romance set in current times, I would get a proper story set in the right context and time.

Want to Watch, by TimELiebe : I'm a Sucker for Musicals - Why do you think I started Watching Indian Cinema?

Yay! Thumbs Up, by Harpreet Singh : Don't miss it !

So-So, by Adhyayan : Not bad

Meeta - I wonder if you'd feel differently if you didn't see musicals constantly, as you do with Indian movies? I haven't seen it yet but I'm really looking forward to seeing it - because how often does Hollywood do a musical any more?

Bollywood? How seldom is it when they DON'T? ;)

TimELiebe has given this movie a Want to Watch(I'm a Sucker for Musicals - Why do you think I started Watching Indian Cinema?). TimELiebe has posted 434 comments and has rated 179 movies. See TimELiebe's page for more details.
TimELiebe

I should say that I've found a great deal else in Indian movies to love and admire - but, as a non-desi American, it was the musical numbers that first drew me (and my friends) to Indian cinema.

TimELiebe has given this movie a Want to Watch(I'm a Sucker for Musicals - Why do you think I started Watching Indian Cinema?). TimELiebe has posted 434 comments and has rated 179 movies. See TimELiebe's page for more details.
meeta

@TimELiebe Well, I think a musical is different from a movie that has songs in it. I think of "West Side Story" or even "Mama Mia" as musicals but not "Sound of Music". Though technically, the latter is called a musical a lot.

Even so, I can watch "Sound of Music" many, many times notwithstanding my overexposure to movies with songs in it. Same is true for "Mama Mia". But not "La La Land"

U have rated it quite low.It will surely get lot of Oscar nominations and will win too.I personally coudnt appreciate the film cz of sheer lack of interests in musicals

Adhyayan has given this movie a So-So(Not bad). Adhyayan has posted 2 comments and has rated 2 movies. See Adhyayan's page for more details.
Harpreet Kanwar

Rotten tomatoes over 90%
Check
Word of mouth over 95%
Check
Saw the movie : loved it to the core since it's refreshing of Hollywood : 110%
Check

Why A watch on TV rating then ?

And in that one piano stroke a whole life flashes by. That's how beautiful the movie is/was.