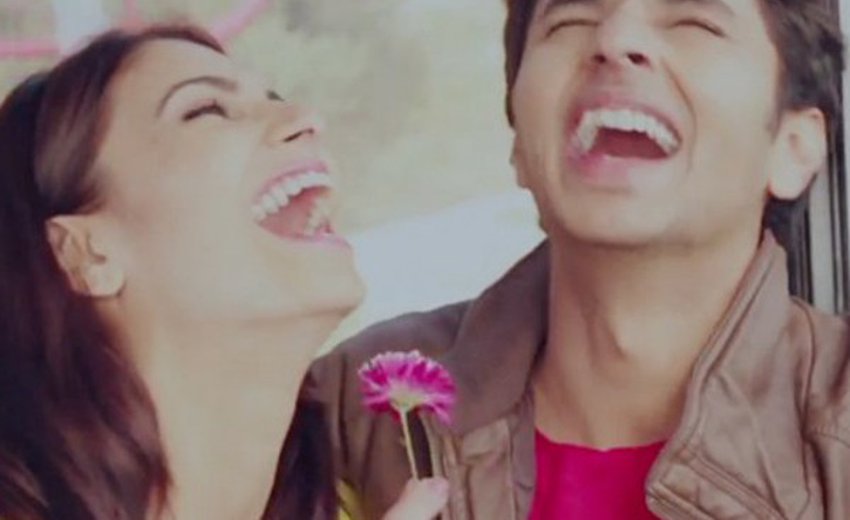 A coming-of-age film about the protagonist who starts out as a loser, good-for-nothing. Been there, seen that. But Kuku Mathur Ki Jhand Lag Gayi tries its hand at being different. It goes about the "coming-of-age" bit in a non-conventional, non-likeable way even. It adds a little zany to it. But, unfortunately in the end, it plummets into the worst kind of run-of-the-mill.

Kuku's cousin Prabhakar helps clueless Kuku in a very Bawarchi kind of a way. He just happens to be around to help anyone who needs help in Kuku's family. His means might not be the most honest ones, but get the Mathur family members what they want, they do.

Kuku Mathur Ki Jhand Lag Gayi has its share of annoying, loud characters. Their existence seem to be to make the film feature length from a short. The satirical bits of the writing induce some humor. But, they are stretched so long that you wonder if the writers were only being satirical or they really believed in the hocus-pocus shown. The borderline between spoof and using spoof as a medium to show exactly the same thing that you are spoofing.

Interestingly, this humbug is where the craziness of the film begins. I am all for quirk in films, but this one gets too literal instead of staying subtle and it comes a bit too late in the film too.

Then you are left with the performances. Siddharth Gupta and Amit Sial are the only ones you'd remember after you walk out of the theater. And maybe Pallavi Batra for the loud character she plays annoyingly and aptly. None of this enough to make Kuku Mathur Ki Jhand Lag Gayi a watchable film.

And what's with the seemingly profanity in the title? Or maybe I don't want to know.

So-So, by Nupur Barua, fullhyd.com : ...The songs are below average. Some are hummable, but nothing stands out. And as for the editing, although there are times when the movie seems to have gone on for quite a while, you cannot find much fault with the pattern.... full review

So-So, by Joginder Tuteja, Movie Talkies : ...If all of it would have come together in a seamless manner with a satisfying culmination, then perhaps one would have labeled it as a coming of age film! ... full review

So-So, by Sonia Chopra, Sify Movies : ...Of course we've had an overkill of Delhi based films, and this film only prorogates all the cliches. Still, debut director Aman Sachdeva's film is full of innocence, charm and fun. A good option, especially if you're fond of this genre. ... full review

So-So, by Somdatta Sen, Star Blockbuster : ...Except a few funny sequences, delhi locales and one liners there is nothing much to look for in the film. Sit back at home and enjoy the IPL 7 final.... full review

So-So, by Madhureeta Mukherjee, Times of India : ...Watch this one only if a 'little birdie' tells you to. We mean a 'Kuku', alright.... full review

Thumbs down, by Bobby Sing, Bobby Talks Cinema.com : ...In short, KUKU MATHUR KI JHAND HO GAYI is a light hearted comic film trying to impress that particular section of viewers who loved watching similar, recent entertainers like FUKREY. But scoring a lot less in comparison, it also strictly remains the one which you might enjoy more watching on a TV channel without making an effort or spending a good amount of money on its costly multiplex tickets.... full review

Thumbs down, by Tanushree Bhasin, FirstPost : ...This must be the worst comedy in the world since it failed to elicit any laughter from the ten people who actually paid to watch the film. By the interval half of them had left and the other half decided to take a nice long nap in the AC. You can easily avoid watching Kuku Mathur... this week. You wouldn't want to be a jhand now, would you? ... full review

Thumbs down, by Johnson Thomas, Free Press Journal : ...The actors are also quite stilted in their performances. Director Aman Sachdeva doesn’t provide either the deftness, light touch or the smarts to make the ensuing drama enlivening. Overall, there’s very little to keep you engaged here!... full review

Thumbs down, by Jyoti Sharma Bawa, Hindustan Times : ... Gupta and Juneja are alright and Sial's UP mannerisms are interesting. Simran Kaur Mundi doesn't get much of screen space. The music is jarring and lyrics defy sense.... full review

Thumbs down, by Shubhra Gupta, indian express : ...The film ends up being a strictly average, and mostly bland, slice of Delhi life. There’s a great deal of Punjabbi Hindi, but that’s par for the course of this kind of template-y film. For variation, we get Bihari, from a guard and his sari-loving wife whom he has left behind in Darbhanga, and Kanpur Hindi, from Kuku’s badmaash mama. Sit.com territory, stretched out to accommodate a film... full review

Thumbs down, by Mohar Basu, koimoi : ...Kuku Mathur Ki Jhand Ho Gayi is a jhand film which is better avoided. With a lack of soul and a half baked storyline, the film is a bad mishmash of convoluted screenplay, dull writing and hasty execution. Though 109 minutes helps, the exasperation of having to watch the film surpasses the minuscule joy of it being a relatively short film. Sometimes devil gets the better of me and the concept of being thankless jumps out of the window. Something of the same order happened when I watched a jhand film. I am going with 2/5. Avoid a jhand movie because you aren’t a jhand... full review

Thumbs down, by Shaheen Parkar, MiD DAY : ...Unlike Kuku’s culinary skills that allow him to rustle up anything from Indian to Chinese fare, the film does not have lots of moments to savour. It moves at an even pace with some laughs thrown here and there, a dose of romance with Kuku befriending his dream girl Mitali (Mundi) in no time and a hilarous jagran track. Where the script falters is its inability to bring a lump in the throat even as we are shown Kuku’s trials and tribulations while he goes about trying to realise his dream. ... full review

Thumbs down, by Divya Solgama, MoviezADDA : ...Dum? Well there are some enjoyable scenes with clean jokes but besides that, there is nothing new to offer in this movie which ultimately makes it a film, 'That is all in the name.'... full review

Thumbs down, by Rahul Desai, Mumbai Mirror : ... Perhaps this film lacked scope from the beginning, but its shortcomings are definitely not a result of less effort. Also, credit to the producers for making sure that every viewer grins at least once-while having to name the film at the ticket window. ... full review

Thumbs down, by Noyon Jyoti Parasara, Now Running.com : ...KMKJHG makes for a decent home video watch. I could definitely check out the shots of Kuku cooking - chopping vegetables and making milkshake - clearly inspired by the opening montage of American TV series Dexter. Else this film holds no promise.... full review

MallOpulent: MOVIE : KUKU MATHUR KI JHAND HO GAYI this is a Movie for every Young Generation.

SickBamboo: Who names a movie - Kuku Mathur Ki Jhand Ho Gayi? Do you still expect it to win Oscars?

musicpurchase: Kuku Mathur Ki Jhand Ho Gayi: The music isn't what we expect from a fun, earthy North India-based movie at all... http://t.co/UtLiOyzxWW

Ezaz_me: So tomorrow Two super flop movie Kuku Mathur Ki Jhand Ho Gayi and Citylights are releasing and both will be washout at BoxOffice.