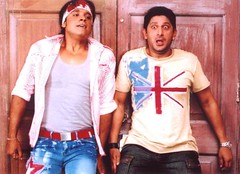 So superfluous is the depiction of love that you wonder what a fool you are to have taken ages to fall in and out of love. Such is the whole drama that you begin to doubt your potential to fall in love, let alone caring about who the protagonist should fall in love with. All this in the 80s style of filming and loving.

NOT A REVIEW - Just wondering how many different ways there can be to complain about slapstick...

Three friends having fun. One of them super rich and gets into trouble but doesn't realize it. Other two try to save him. The three friends are played by Aashish Chowdhary, Arshad Warsi and Yash Tonk. The Aashish-Arshad combination brings back not-too-fond memories of Dhamaal. That, and the whole genre of 3-4 good-for-nothings getting together to create slapstick come to mind and create anticipatory anxiety. Not enticing at all.

Apprehensions multiply when the actor himself is not happy with the end result and refuses to promote the film.

It made him [Arshad Warsi] look like a second fiddle to Ashish Chowdhury and that would work against his image as he is playing the lead role in several other films.

Oops! Wasn't that like apparent at script stage? Or while shooting? Even otherwise didn't he realize he was making a fool of himself while doing this?

Needless to say, I'm not exactly excited about Kisse Pyaar Karoon. The hopeful me is wondering if there will be at least a thing or two to fall in love with. And I won't want to say, "kyon isse pyaar karun?"

Right from one of the cheesiest title sequences of the past few years, second only to maybe Welcome you can tell you are going to paraphrase the title from "Who should I love?" to kisse badla loon? "Who should I avenge?". But yet we are fair around here, so we don't pass judgment until we've seen it through to the end credits. No respite in sight. Oh well...

Ashish Chodary ... ok, now that's not a typo nor is it me trying to crack a good one, that's how his name is spelt in the opening credits! Anyway, Ashish - I admire him for his capacity to make a fool out of himself - film after film after film - playing a dog fetching biscuits or just acting human-silly. Anyway, you can't associate too much intelligence with someone who's signed a script like this. Ditto for Yash Tonk.

The women do what women in such films do - play dumb, hold one expression throughout as if they are charged a fine if they changed it. Same rules seemed to have been applied to the costume designer who was told to make the most unwearable outfits possible.

The story line of course is that these three are friends and generate loads of money though they don't really have a means of livelihood. Sorry, I digress. One of them falls in love with a girl who can't stand the sight of the other two. And so the battle begins. But since this is not enough masala to make a 80s film, we have a villain, an inspector, and a godfather thrown in. And since it is after all not a film from the 80s, we have random references to them sprinkled across.

Actually it's wrong to call the references random because that'd be like saying only they are random. The entire product is one huge display of arbitrary human misbehavior. What exactly is anyone thinking while writing, directing, producing something like this is beyond me. Just plain incomprehensible.

Thumbs down, by Taran Adarsh, IndiaFM : ...KISSE PYAAR KAROON? uses every rule in the book to entertain the viewer.... full review

Thumbs down, by Janhvi Patel, indya.com : ...Kisse Pyaar Karoon makes you want to walk out of the theatre... full review

Thumbs down, SmasHits.com : ...The movie is likely to catch up with the general audience, especially in single screen theaters.... full review

Thumbs down, by KM, The Asian Age : ...Replete with vulgarity – both visually and in dialogue – here’s a B-grader that’s tackily photographed and designed.... full review

Thumbs down, by Nikhat Kazmi, Times of India : ... Kisse...is a loser from the word go... full review