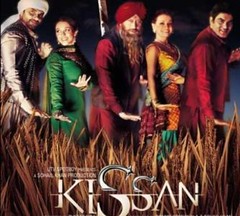 Violence, politics, business, family, romance - this one has it all. Does it make it THE masala movie to watch. Na-ah. Tastes bland despite all the masala. Save an interesting, unexpected twist there ain't anything to savor.

A family is torn apart by the distance between the village and the city. Physical, emotional, financial, etc. Education within agricultural background. But, the silly jokes stereotyping the city-citizens' arrogance and the villagers' ignorance get tiring. One brother's naïveté and the other brother's love for violence gets a bit too convenient to aid in wrapping up the film. Letting misunderstandings brew, being blind to manipulation is one's forte. And the other and his enemy just like snapping off anyone who offends them. And yet there are some interesting turns. But again, the climax is extremely handy. Very simplistic. Ultra-hurried.

None of the characters are complex enough to require any great performance from anyone. So, from Jackie Shroff to the Khan brothers to Dia Mirza they all just run through the mechanics. Whether or not any of them are capable or not, is another question all together.

And yet amongst three men in the lead roles, Dia Mirza's character Priya has a role of some minimal substance. But everything from this to the main plot seems very superficial and cursory.

I cannot leave this place without mentioning how annoying the background music was. People, just because it's Punjab you don't need a few hundred extra dholak-wallas in the orchestra!

It's a debate. Whether to applaud the unpredictability they've attempted and partially succeeded at. Or to hate the predictability when they do the clichés. Had they done something more spectacular with the unexpected turn of events, it might have been worth a try. And since that's missing, there isn't anything I can ask you to look forward to.

Thumbs up, by Gohar Iqbal Punn, Radio Sargam : ...this time he handles the subject on the celluloid with maturity and conviction. ... full review

Thumbs up, real bollywoood : ...Technical aspects of the film are good and so is Daboo Malik’s music.... full review

So-So, by Roshni Mulchandani, Bolly Spice : ...Ideally Sira should have taken the idea of conflicting ideas and used more twentieth century problems and situations rather than ones that would probably occur in the 198's... full review

So-So, Movie Talkies : ... The film is full of violence and only ends up portraying the Indian villager as being quite barbaric.... full review

So-So, by Subhash K Jha, Now Running.com : ...The film's charm lies in its ability to be an old-fashioned cliche without getting wobbly.... full review

So-So, by SpiceZee Bureau, Zee News : ...However the problem lies in some predictable sequences and the fact that it just touches on the surface of serious issues like farmer suicides.... full review

Thumbs down, by Chanda Gohrani, AOL INDIA : ...It is meant to be rustic and it is so. However, in the process, the film almost looks amateurish. ... full review

Thumbs down, by Khalid Mohamed, aslibaat.com : ...And the Khan brothers are Khan brothers. Stubbornly average like the rest of this Kisaan squash.... full review

Thumbs down, by Rajeev Masand, IBN Live : ...ultimately a vendetta film based on a similar premise, but with a central conflict that's embarrassingly archaic.... full review

Thumbs down, india.com : ...Barring newcomer Romeo who plays the villain, the performances in Kissan are shockingly bad, as none of the characters speak with proper Punjabi accents.... full review

Thumbs down, by Anupama Chopra, NDTV : ...Kissan’s first half is reasonably engaging but after the interval, proceedings become ridiculous. ... full review

Thumbs down, by Nithya Raman, Rediff : ...Arbaaz does a terrible job in the film. Jackie makes an visible effort but lands up being too dramatic... full review

Thumbs down, by Sonia Chopra, Sify Movies : ...Suddenly, from a family drama, Kisaan u-turns to a maar-dhaad film with the most unpalatable footage. ... full review

Thumbs down, by Janhvi Patel, StarBoxOffice : ...The first half of the film is bad and the second half gets worse and too violent to tolerate.... full review

Papa (Jackie Shroff) sends older son (Arbaaz Khan) of to the city to get himself an education and teaches the younger one (Sohail Khan) to plough his farms. Differences arise. And there's another villain in the picture. Not a pretty one it is though…

Though the plot of the story is set in Punjab but there is very less use of Punjabi. None of the actors have that typical Punjabi accent.