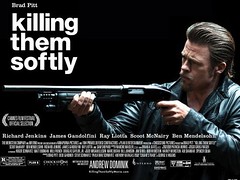 wogma rating: Beg or borrow, but do watch (?) - But only if you enjoy subtle, dry, black comedy. Else catch on DVD.

Andrew Dominik’s latest film, the noir thriller and dark comedy ‘Killing Them Softly’ is the kind of the film that can easily have polarizing opinions, particularly here in India. But if dark comedy is your thing, then Killing Them Softly is thoroughly enjoyable with some insanely sharp dialogue, good performances and a couple of super-stylish action set pieces.

Gangster Noir. Coppola and Scorsese showed us how it’s done. Tarantino turned it on its head. And every once in a while a Hollywood director comes along and screws it up, sending us running back to the masters for solace. For some reason, I expected writer-director Andrew Dominik’s latest film, Killing Them Softly to belong to the latter category. My expectations dove further south after a prominent director, the maker of one of this year’s most loved and talked-about Hindi films, tweeted saying that it was one of the most boring films he had seen. How glad I am that I watched the film anyway.

Killing Them Softly is easily one of the sharpest, smartest-written films of the year. Dialogue-heavy, yes, but at no point does the film get boring. Also, the film has one of the best-ever endings seen in recent times.

Two small-time thugs, played excellently by Scoot McNairy and Ben Mendelsohn, attempt a heist a little above their station – robbing a poker game involving the mafia - after an older operator manages to convince them that someone else would take the fall for it. The amateurs, however, don’t know just what they’ve gotten themselves into. A professional mob enforcer, a hitman – Brad Pitt, dressed in all black, effortlessly ‘cool’ - is roped in by the Big Guys to look into the matter and bring the perpetrators to book, so to speak.

The razor-sharp dialogue, mostly tongue-in-cheek, manages to keep the long character interactions interesting at all times. And every once in a while comes an action set-piece that can make your jaw drop. Interestingly, the film’s timeline runs with the Barack Obama - George W. Bush Presidential race, the run-up to Obama eventually being elected President of the United States of America. What that does is give every character and every line a context. So there is generous talk of the recession hitting even the mob business, falling rates of pro-assassins in these hard times and of course, the fact that in the US, ultimately it is all about the money.

What the film really gets right is the feel of it. The frames aren’t picture perfect; they are meant to be gritty. Every shot in the film has primarily been set up to create the mood. The cool it eventually oozes is a by-product of having good actors delivering great lines without making it go over the top.

Brad Pitt is first-rate as the ice-cold, no-nonsense hitman roped in by the mob to look into the issue of the heist. It is the kind of role that harnesses Pitt’s natural charm, and his deadpan expression goes well with his uber-cool look. He makes a late-ish entry in the film, and his larger-than-life persona is largely kept in check, so that he doesn’t come off looking like the ‘hero’ of the film. James Gandolfini as the expensive hitman from out-of-town, now well past his prime because of his alchohol-and-hooker addiction is excellent as well. Also good to see is Ray Liotta as the gangster who runs the poker game that eventually gets robbed by the amateurs.

However, it is easy to understand why the director I mentioned earlier didn’t like the film. Indeed, there will be more like him. And you’ll know in the first ten minutes if the film is going to work for you or not. Right from the word go, the lines mouthed by the characters are sharp quips meant to evoke a certain amount of quiet mirth. If you aren’t smiling at the coolth of it all from the beginning of the film, there is very little else that you are going to like about it apart from some well-shot action portions, which are few in number in any case. But if you are drawn in from the start, then this is the kind of film that you would be itching to watch again.