Gorgeous cinematography. A sweet premise. Gets a lot of detail right but lingers around a bit much.

Adolscence is probably on the of the most unexplored phases of life in films. That is surprising considering it has a lot of nostalgic value and will appeal to a lot of adults. Killa manages to tug that chord. Yet, what stays after the film are the visuals - that is not necessarily the best thing that can be said about a film.

Killa captures the gorgeousness of Sahyadris' coastal end with the gaze of a person who is in love with the plush seaside. And when it is does not have the natural beauty, the frame is lit and composed like it was a painting to be framed.

A lot of detail is captured in the little things that you'd find in a lower middle class household of rural Maharastra. The little steel cups used to drink water; the way a lady sets up a gas cylin; the process a fisherman goes through before casting a net – are just a few examples. 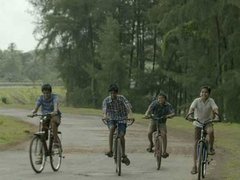 A lot of nuance is captured in the mannerisms of the actors and how they react and emote. While Amruta Subhash and Archit Deodhar are amazing with their restraint, Parth Bhalerao is simply mesmerizing by the way his jaw drops or his hand lingers. You instantaneously judge the kind of 11-12 year old boy he would be. I was reminded of watching an Indian Idol Junior show where my jaw dropped at a 9 year old performance, “how is that even possible!?” That's exactly how I reacted to Parth's act too.

Beyond that Killa has a few moments that just get you to sit up and notice – whether it is a moment of bonding between mother and pre-teen son or a group of mischievous young boys. You are certainly going to find a moment or two of nostalgia – yes, the good ol' days.

However, this phase isn't as romantic when you are going through it, remember? Puberty and the thousand tribulations it brings. Not being a child any more. Physical attraction. But, Killa doesn't touch any of these in detail. It just aims to be and is “a monsoon in the life of a young boy.” For a huge part, it seems to focus more on the monsoon bit than the young boy.

While it is pretty beyond expression, the monsoon lingers on a bit too much for a film. I'd much rather spend time in nature than watch nature on screen. Of course, you do see young Chinmay (Archit Deodhar) take in the new world around him, you see him struggle to make sense of a world without a loved one, a world where he is forced to make new connections, again and again. Yet, Killa makes you feel you have seen very little, like a lot was left unexplored. This is without even brining in comparisons from films like Balak Palak or Vihir or Shaala or their Hindi second cousin like Udaan. In absolute terms to, Killa falls short after you've taken in the initial beauty of its frames.

The question then boils down to how much more do you want your film to be above magnificent scenery – a little is good enough or you want a lot more? A little and a bit more, Killa gives you. A few months to come-of-age for a boy just about turning into a teenager – felt too little.

Yay! Thumbs Up, by dr hemant a sant : How to face changes and challenges of the Life despite all

Yay! Thumbs Up, by Kaustubh Bhonge : Watch for sure, preferably in theatre

Yay! Thumbs Up, by Nafees Ahmed : A Quintessential throw back to childhood memories.

Nay! Thumbs Down, by Krunal : Half-baked

I have never seen such a detailed review, Meetu. Great job!

Regarding the film - Since it is not in my language, i will not be able to watch it anyway. But looks like they have touched upon an important aspect of life, which most of us remember and (hopefully) enjoy...so should please the audience!

Thank you, @Alok. I believe all screenings have sub-titles. The show I watched had them and pretty good too.

I think the subplot for physical attraction have been kept aside deliberately; as it would have turned into a love story without happy ending. Thus he managed to focus on Changes in Life, exploration, realisation.
Being a cinematographer as well as director himself, it can be said that he may have not able to control the urge capturing nature in each frame. However I think The Rain acts as a symol for ups and downs in life as it looks visually pleasant but at the same time it is complained about by the characters in film.

Watch KILLA if you want to relive the fears trials tribulations and the sheer Joy of being a eleven year std 7 th child, a bloy with gang of Boys to deal with and Life whatever it throws to you and your family.Go watch the greens rains seas and beaches of Maharashtra at its pristine self alive even in silence.One is surrounded by symbolic Fortifications ,our doubts our ears our pre concieved notions.One is cowed down by circumstances and lack of material and Human support.Still one finds ones way even f one has a single Mother and few friends that too memories of them .Life teaches you to adapt and come out of the tunnel to see light at end of which your bright future and friends loved ones are waiting.So get up shake out all your webs and slack to walk the talk,climb up the steps of the staircase a ladder of life which looks difficult to you before you just Begin with a right frame of mind,attitude.All of us face the fire before we come up well.So be it young men..Go see the film to relive yours or recharge your 11 year old son or daughter or an Orphan like a Bandya!Contribute to some needy ones growth then.

Loved reading your review. Liked the way you have mentioned tiny details about the film, but I certainly differ about your statement that "it seems to focus more on the monsoon bit than the young boy."
With all due respect, I feel somewhere you missed the underlying theme that film wanted to convey. Chinmay was going through so much, he could not get accustomed to his new class, new friends and confronts his mother over petty issues. Film was more about Chinmay maturing as person. Anyways, lovely to read your article. I will be visiting you for more such healthy discussions .
Here is my review of the film, do give it a read in your spare time.
http://www.nafeesspeaks.com/killa-film-2015/

Killa to me was no more than a travel video of Guhagar. I am actually perplexed to how so many people are praising the film. It didn't quite appeal to me. The funny part is the praise for cinematography, I don't think pretty images make for good Cinematography, it has to tell a story visually as to avoid expositions through the spoken word, also I found the Music to be blaring. I would've preferred a minimal score. The acting were good but the screenplay was lame, most of the plot looked half-baked to me. I guess my high expectations come from much better coming of age films that I've seen. I am sorry but I was sorely disappointed.

Krunal has given this movie a Nay! Thumbs Down(Half-baked). Krunal has posted 1 comments and has rated 1 movies. See Krunal's page for more details.
meetu

@Nafees Thank you! Somehow I found Chinmay's "maturing" a little too quickly and without adequate triggers.

@Krunal I wasn't sorely disappointed, but yeah, I know what you mean.