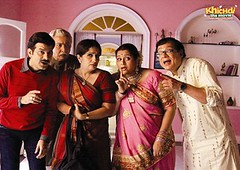 wogma rating: Watch if you have nothing better to do (?) - who can stop you if you love your khichdi, though

Khichdi The Movie is so silly you HAVE to laugh. But that is only if you HAVE to watch it in the first place. And I don't see why anyone would want to do that.

I'm as much of a movie buff as I am a Indian-TV-show hater. Other than an one-off musical 'reality' show I tried to follow saw some 3 years ago, I have very little patience to handle the TV soaps on Indian telly. 127 seconds and I've had too much. I guess this is enough information about my television-watching habits for you to know that I have no clue what the 'comedy family ki family comedy' is all about.

Unfair as it might be, the first words that formed themselves in my head when I first heard of the TV-show were "OH MY GAWWD! NO!!" (Yep, all caps and exclamations included.) Then this synopsis of the TV show raised my hopes a bit. After all, it mentions that one phrase that ropes me in blind - "gray characters". Also the producer is confident that, " It's not necessary to have seen the serial to enjoy the film." And this despite the characters already having a considerable fan following.

Anyway, all hopes were put to rest with -

When a film is so over-the-top and the situations are so exaggerated, I tend to look for the spoof in it; the underlying comment; the cynicism. And of course, left to imagination, it ain't too difficult to find it either. But, Khichdi is so crass, that even when I laughed, I felt yucky inside. It's not the toilet-humor kind of crass. It's absolutely (hopefully-miles-away-from-reality) insensitive crass.

I guess, it's their way of saying nothing is worth taking seriously - neither deaths and funerals nor weddings; and certainly not respect for the older generation let alone each human. And while they are at it, as is in vogue these days, a potshot at the media and the education system too. As if darker the joke, harder were the writers laughing at how seriously we treat the issue in real life.

And thus, you can find social and philosophical commentary on almost everything - from asking the creator of the universe about the scarcity of water, to a human's love for creating problems for himself - a lot of ground is covered. And most of it using juvenile humor better known as PJs (poor jokes or more appropriately lame pun jokes). My affinity for such humor is obvious. In real-life and as an audience, they are all equally greeted with eye-roll after eye-roll.

Yet I appreciated the fluidity of the situations. A film like this could very easily have been episodic. Even the most expensive 'comedy' films from India are episodic. But, Khichdi at least has some semblance of cause giving rise to an effect, rather than a backward calculation.

Also, given the genre, I guess the lot of actors did a fine job of looking into the camera while acting! My palm was stuck to my forehead all through a scene in which the characters are giving each other acting lessons.

Aaaye-aaye-aaye-aay-aay. What will become of this universe? Someone please tell me, Khichdi's huge following on TV is a analogical poor joke.

Thumbs up, by Taran Adarsh, Bollywood Hungama : ...Even if you're clueless about the characters in the story - like I was - it doesn't take time to know that the family has its brains in its knees.... full review

Thumbs up, by Deepa Gahlot, cinemaah : ...Kapadia has the ability to wring humour out of the most mundane situations and every line has a pun popping out. ... full review

Thumbs up, filmi cafe : ...The movie is filled with popular lines by some of the most endearing characters like “Babuji Main Hoon Na’.... full review

Thumbs up, by Pankaj Sabnani, Glamsham.com : ...All the characters and their histrionics are similar to the serial. They are totally adorable.... full review

Thumbs up, by Divya Solgama, Gomolo.in : ...the humour of one liners stops you suddenly feel that you are watching a low budget movie on a Big screen & at times the movie drags too. ... full review

Thumbs up, Movie Talkies : ...As with all comedies, it is the script which plays a major role. Where Khichdi is concerned, however, the screenplay, is slightly weak and uneven in tone.... full review

Thumbs up, by Rajul Hegde, Rediff : ...But too many gags spoilt the broth somewhat, dragging the movie unnecessarily at the end.... full review

Thumbs up, by K N Gupta, SmasHits.com : ...Technically too, it’s brilliantly made by a competent team... full review

Thumbs up, by SpiceZee Bureau, Zee News : ...it relies too much on gags... full review

So-So, by Deepa Gahlot, cinemaah : ...Kapadia has the ability to wring humour out of the most mundane situations and every line has a pun popping out. ... full review

So-So, by Noyon Jyoti Parasara, Seeds and Deeds : ...The screenplay is kept simple in tune with the genre of the film. ... full review

So-So, by Nikhat Kazmi, Times of India : ...It isn't easy to translate a television comedy into a film, but director Aatish Kapadia does manage to transcend most of the hiccups... full review

Thumbs down, by Komal Nahta, koimoi : ...The problems with the film are too many. ... full review

Thumbs down, by Janhvi Patel, StarBoxOffice : ...What’s good is that every actor is completely in character.... full review

Yay! Thumbs Up, by lame_guy

Yay! Thumbs Up, by mina

Yay! Thumbs Up, by neil

Nay! Thumbs Down, by Anindita Mukherjee

A family of weird people set out to create trouble for themselves. Good thing they know how to laugh at themselves.

thank god i got to know abt movie my hard earn money is saved......

I would disagree with your rating because I belong to the category of people who loved "Khichadi" on television.

Before going to the theatre I expected it to be just another episode, 4 times longer than on TV, and it met my expectations, maybe it exceeded them! I went to watch it in a theatre just because I did not want to watch Robot, nor a Priyanka Chopra movie.

The reason Khichadi on TV got so famous was because the actors did a splendid job in getting into the characters they were playing... "jab Bhagwan akal ke laddoo baat rahe the, tab...bade loggggg bade log"

@all for some reason i thought, this film going to get super-mixed reactions. Look's like that's how it is turning out to be. Looks like it has worked better for people who have followed the TV show, because it is their kind of humor and characters in the first place. And in the ultimate analysis their opinion counts the most because they are the target audience

i m gonna watch it .bcoz its funny

neil has given this movie a Yay! Thumbs Up. neil has posted 1 comments and has rated 1 movies. See neil's page for more details.