A quiet film that aims to simmer uneasiness within. But, alternating between showing life in a village and telling a story, Kadvi Hawa manages to pace itself too unevenly to create impact.

You want to shy away from watching the entire length of the trailer. The farmers are in pain – and it is just too much to watch. Drought and floods are both taking their tolls on farming. The farmers blame the nature, but why is nature behaving this way? Who are the real culprits? No, we don’t want to hear the answer.

Both Ranveer Shorey and Sanjai Mishra seem to be at the top of their game. Even in the two minutes you see them here, you can see the farmers’ frustration. Yes, the movie will be uncomfortable for the brain and the heart. And yes, it will have to be seen for those very reasons.

The opening sequences of Kadvi Hawa exposed my affinity to the colour and texture of dry, desert sand. The aridity is gorgeious, to the extent that I can smell it. Maybe it is the Rajasthani blood – for I haven’t ever lived in Rajasthan. Or maybe it is because I am not a farmer who suffers at the hands of drought. This is the kind of insensitivity Kadvi Hawa aims to point an accusatory finger at. Unfortunately, it spends too much time in showing us the village life that the intense, human story has little space to take hold.

Just by its presence in the dialogue, the wind comes across as a character in the film.

Kadvi Hawa treats the intense tragedies of drought and floods with the same aloofness as city-dwellers would treat it, “Yes, we know there are problems. Yes, they are grave. Yes, they require attention. It’s sad, very sad. But, they are not our problems. We have our own.” And it is quite human to do so, right? That is exactly what Hedu (Sanjay Mishra) and Gunu (Ranvir Shorey) do too. To alleviate themselves from their misery, they are okay with taking down someone else. But, each one has an extent to which they would do so. Both of them, stop short of going all the way. And this is brought about beautifully in the film.

Alas, all this happens only in the second half. The entire first half is spent in setting up the scene for us. Look, they have no electricity. Look, they have no schools. Look, they have no water. Look at these other people, they have too much water. Look, the government is spending its time in sweeping macro changes when little is changing at the ground level. This would have all worked really well, had the story gone on along side. While the mute, still non-movement of the film had its own charm, it didn’t work for the film.

And this treatment is a mystery because the story had so much going for it. The things people on both sides of the story were doing to stay afloat by itself was engaging. While one came across as mean, as an audience you could understand where they were coming from. Mechanisms of how loans worked and how deep the problem came across quite starkly too. These hard facts actually make you identify with the characters who are ultimately good people that have strayed away by their circumstances.

Well written characters have been performed well through and through. Kadvi Hawa is not at all a dialogue heavy film. A lot is therefore left to these performances. Tillotama Shome, ironically brings life to a woman’s submission to her situation. So effective is Sanjay Mishra’s act that after a bit, you don’t even realise that a person with sight is playing blind. Ranveer Shorey’s character is in a dire situation himself but you don’t feel like empathising with him because of the spot-on performance. Even the mute Bhupesh Singh has a presence about him for the few scenes that have him. 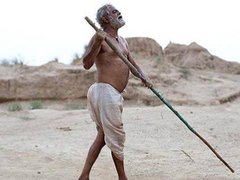 Just by its presence in the dialogue, the wind comes across as a character in the film. Hedu might not know the science behind how the wind works but he knows the wind is what makes and breaks his life. He is in fact, nostalgic about the wind that brought him the seasons because the winds today have made his life bitter. I am not too sure if this film works as a message on climate change because it shows only the effects and stays mute on the causes. I guess those are for us to ruminate over.

Thumbs up, by Anna MM Vertticad, FirstPost : ...Reciting a poem he has written on pollution for this one, Gulzar’s voiceover runs over the titles in the end. “…ye zameen darti hai insaanon se,” he tells us. This land fears humans. Not governments, not politicians or industrialists alone, but humans as a whole. Kadvi Hawa is a bitter pill to swallow, and one that is designed to compel us to look within. ... full review

Thumbs up, by Abhishek Srivastava, FirstPost : ...he impact this film creates is like the jolt of a sledgehammer potent enough to wake us from our reverie... full review

Thumbs up, by Johnson Thomas, Free Press Journal : ...There’s not an iota of unnatural allure in the telling. The narrative is stark and depraved and the camerawork, editing and performances grab at you as though calling out for some solace – in this heart-breaking tableau where survival itself is in doubt. The performances are impeccable and so true to life that it’s hard to tell whether they were actors or real people. ... full review

Thumbs up, by Sweta Kaushal, Hindustan Times : ...Though Kadvi Hawa is touted as a film on climate change, it talks as much about farmers’ suicide in draught and flood-hit areas of our country. Despair is writ large on the faces of people who are struggling against the fury of nature and an unsympathetic system demanding its pound of flesh. ... full review

Thumbs up, by Umesh Punwani, koimoi : ...Kadvi Hawa or the dark wind is from those movies you don’t watch to entertain yourself. Stay away if you’re watching this as your usual movie but watch it for sure if you want to be aware what’s really happening around. ... full review

Thumbs up, by Mayank Shekhar, MiD DAY : ...I must also make a quick confession here. Due to unavoidable time constraints, I had to watch the screener of this film, rather than catch it in a theatre. I don't know whether that puts me at an advantage/disadvantage as a viewer. There's definitely the vastness of the ravines that should lend itself better to the full canvas. But then, hey, with such performances before you on the screen--whether laptop, TV, cell-phone--does size really matter? I don't think so. ... full review

Thumbs up, by Saibal Chatterjee, NDTV : ...Kadvi Hawa hits home with the force of a gale. It is designed to provoke contemplation and action, a mission that it achieves without any serious slips. Watch it because it is an important film that offers an essential takeaway. ... full review

Thumbs up, by Kriti Tulsiani, News18.com : ...The cinematography works as an ode to Madhab's story. It lay bares the despondency of debt-ridden farmers while simultaneously showing an accurate portrait of these parched lands. The best part of the film perhaps is that it doesn't intend to answer or preach on the difference between right and wrong but instead leaves you with plenty to think about. Unsettling but rightly so. ... full review

Thumbs up, by Sreehari Nair, Rediff : ...In the final scene, after a calamity has befallen Ranvir Shorey's character, and as he desperately attempts to make a call, a prayer forms on his lips. ... full review

Thumbs up, Sify Movies : ...If you insist on watching Justice League this week you mustn't regret having missed out one of the most thought-provoking and exhausting and yet finally exceedingly rewarding film. ... full review

Thumbs up, by Troy Ribeiro, Zee News : ...The background score by Santosh Jagdale is inspiring and hits the right notes. The only song "Main Banjar" which comes in far end of the narrative suitably conveys the essence of the film. ... full review

So-So, by Zinia Bandyopadhyay, Desi Martini : ...The film overall is definitely a must watch. It should be watched, not as an entertainer but something that will enlighten you and bring you face to face with the gravity of a situation that we, the upper middle class and middle class very conveniently avoids. ... full review

So-So, by Suhani Singh, india today : ...Despite a running time of 95 minutes, Kadvi Hawa still feels a laboured watch. Nitin Dixit's screenplay trudges along, not digging deep into what has created the harsh landscape that has made the farmer woes from bad to worse. ... full review

So-So, by Shubhra Gupta, indian express : ...feels like a stretch even at 100 minutes... full review

So-So, by Nandini Ramnath, Scroll.in : ...The better character is Gunu, who works hard to earn his commissions and has his own sad back story. Ranvir Shorey plays the debt collector with the right mix of venality and humanity, and emerges as the earnest and plodding narrative’s most interesting character. ... full review

So-So, by Namrata Joshi, The Hindu : ...Kadvi Hawa is essentially a short story on screen with a proverbial twist in the tale. Panda, however, plays it too slow for its own good — long sequences, seemingly static scenes. It gets protracted and plodding. The end is sudden, abrupt, leaving one with lots to ponder on but would have been more impactful, had the film been crisper than the 100-odd minutes. ... full review

So-So, by Reza Noorani, Times of India : ...The chemistry between Ranveer and Sanjay is darkly entertaining. You may even feel guilty while enjoying a moment of black humour in scenes between the two actors. With powerful dialogues by Nitin Dixit and achingly beautiful lyrics by Mukta Bhatt, the film is an engrossing watch. For a serious film on global warming, Kadvi Hawa is non-preachy and entirely watchable. ... full review

sreeparnas: A film with a strong narrative, superb performances and a message that cannot be brushed aside! My review of Kadvi… https://t.co/Hzz2qpQGUK

SahiNahii: If you watch one movie this weekend, please go see #KadviHawa! A brilliant film and one of the best reviewed films… https://t.co/x2xuha8W0M

Per_Sapien: Kadvi Hawa Badlo! Get a glimpse of what the world will look like tomorrow if we don't take global warming seriously… https://t.co/552Tj5TjsU

mrkaran_: Watched Kadvi Hawa. What a class act by Sanjay Mishra, Ranvir Shenoy. Must watch this is.

ManOfTales: All in all, a great effort by the team, especially the director in telling us about the perils of climate change... https://t.co/qdZZD9oFXA

BFFCmag: It is sheer brilliance, this film @KadviHawa . It makes us realize we are truly living in a state of oblivion. Catc… https://t.co/AnvMy8Ja0b

Yay! Thumbs Up, by Anushka Vashishta : Kadvi Hawa shows the real picture of farmers across India.

Yay! Thumbs Up, by Divya Sharma : The biggest irony is that the farmer is least responsible for climate change

Nice review. This movie is an eyeopener for all of us. We need to understand that climate change is real and drastic.

Kadvi Hawa movie is a portrait of rural India that not many of us would want to see. But it is an important film that brings you face to face with unpalatable truth Kadvi

Divya Sharma has given this movie a Yay! Thumbs Up(The biggest irony is that the farmer is least responsible for climate change). Divya Sharma has posted 1 comments and has rated 1 movies. See Divya Sharma's page for more details.