Jaundya Na Balasaheb delivers a satisfying, believable climax. A feat very few movies can boast of. But, it takes forever to get there.

If it were not for characters that mostly stay true their character till the end, especially through a long climax, Jaundya Na Balasaheb would be a very long film to sit through.

Can also be accused of taking itself too seriously while clearly wanting to keep a light tone. This constant struggle shows.

Sure, there is fun dialogue and characters that belong to the milieu, but that tone is set in the first few minutes. The witticisms dry up and you get used to the characters and their accent. Thereafter, each line, each scene and sequence gives you the feeling that it wants to say something larger than what can be literally understood. The film is constantly trying to make a bigger point. And that weighs it down.

Fair enough, the points – important ones at that - are made. But then there are too many. Jaundya Na Balasaheb ends up spreading itself thin over too many issues. Also, after a said point is made, what next? The sequence drags and overstays it's entertaining/educative welcome. The only thing that remains engaging are the interesting nicknames given to one and all characters in the village that the film is set in.

Along the way though, we have some wonderful, even if at times theatrical, performances. But hey, they are practicing for a stageplay, so you can give them that. Having said that, a few characters reminded me of this very popular play, varhad nighalay londonla. The setting of a small Maharashtrian village, the characters and how they interact with each other and so on. However, Jaundya Na Balasaheb is a broad stroke and a pointed take on societal issues.

The only thing that kept the film from being a complete bore is the superlative climax. For one, it is one you expect the least. To top it off, the concept is believable even if what actually happens is far from real. In fact, it made me wonder if all that slow build-up was in fact, necessary to have the said impact. 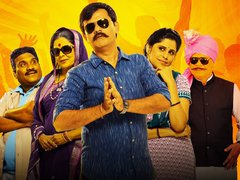 Jaundya Na Balasaheb can also be accused of taking itself too seriously while clearly wanting to keep a light tone. This constant struggle shows. It is not an easy one to overcome, especially for a first time director.

This socio-political satire would have worked better with about 45 minutes of it's run-time chopped off. This thought crossed my mind a lot while watching the film, “Every minute that takes a film beyond the 120-minute mark has to count 2-3 times more than usual.” And if you are thinking that while watching a film, it clearly hasn't fulfilled that requirement.