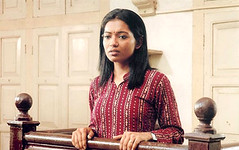 A woman centric storyline is always a welcome change. Especially when the lead ladies stand up to the tall task. Unfortunately though every once in a while the script digresses into a subplot and thus loses focus.

It’s really exciting that new things are being tried. One obvious by-product of the process is that good directors, actors, music composers, lyricists are getting the visibility they deserve. Even if this particular movie is not necessarily the best cinema produced, it is just refreshing because of the subject matter chosen.

Scripts revolving around women deserve brownie points anyway. Why? Because they are bound to be different considering there are such few made. This script, like many others, addresses the problems of the “system” that runs the country. The contemporary touch that it gives the context makes it a gripping watch.

Unfortunately a great chance to have insightful dialogues is lost. And it's not like the silences are used well. Also, ultimately, it is a message movie. But, the message seems to be geared towards the media. How many takers are there for a message that specific?

Koena Puri and Swati Sen are brilliant actors and it would be a shame if they don’t get such meaty characters to play in the future too. Swati shook me from within, in one of the scenes. The other actors are at best average. Most of them had monotonous, lifeless dialogue delivery.

Though the music isn't extraordinary, the lyrics are awesome. And, the background score breaking into "It's breaking news" is a nag.

Unfortunately, outstanding acting by the lead ladies will not be enough to cover the flaws in the details of the script. And this is despite an overall interesting plot. How I wish, it was marketed a little better, so at least a few more people would know about it.

Thumbs up, by Martin D'Souza, Glamsham.com : ...But it is Koel Purie that impresses the most in her portrayal as a television journalist.... full review

So-So, by Taran Adarsh, IndiaFM : ...While the first hour is involving and rarely loses the grip, the second hour is problematic... full review

So-So, by Hanumant Bhansali, Radio Sargam : ...Director Vishal Inamdar shows his potential of a fine storyteller. With a little more experience, he should come out with a better grip on his script.... full review

Thumbs down, by Rajeev Masand, IBN Live : ...Exaggerated to the point of being embarrassing, the characters and the situations in this film are way over-the-top, which brings me to the one burning question I want to ask the film's director - would just a little research have hurt?... full review

Thumbs down, by D Morgan, Rediff : ...The performances coupled with mediocre dialogue, will just not let the audience accept the reality that the film is trying to portray.... full review

Thumbs down, Upper Stall : ...the two central characters Keol Purie as the upright Vidya Sehgal and Swati Sen as the victim Sangeeta try hard and do what they can but its hardly enough.... full review

Vidya (Koel Puri) is a news reporter who is given charge of the crime department in her TV Channels. She thus organizes sting operations. She wants to stick to her ideologies and also gets emotionally involved in one such operation.

A woman centric storyline is always a welcome change. Especially when the lead ladies stand up to the tall task. Unfortunately though every once in a while the script digresses into a subplot and thus loses focus....