The usual greedy businessman-politician-police web against the hapless common man. However, if you don't know about the scam close to what's really happening in Punjab's sarso-de-khet1, you might want a peep in.

On the one hand, yet again you have the common man finding himself stuck in the web of greed for power and money by the business-politics-law-order nexus. On the other hand you have yet another scary scam. On the one hand you have a scary scam you might not have heard of. On the other hand you have the regular story of a frustrated and disappointed common man taking on the system. Repeatedly, you may weigh one against the other but the Singham-usque take pulls the film down even as the scam, which brings a shudder down the spine, tries to pull it up.

Because you know this inhumanity is not fiction.

You cannot doubt the sincerity with which the writer/director take a shot at the issue of ground-chemical-induced cancer. It is one of those scams that you vaguely know of, but don't know the extent to which industry and agricultural pesticides have taken root. In fact, as Arjun Mishra (Arshad Warsi) is shaken up by events he unveils, you are too. Because you know this inhumanity is not fiction.

The details though aren't entertained. Many plot points seem like convenient ways to push the drama to the two-hour mark of run-time. An instance of a person murdering someone on their own side rather than the ones in the opposition left me puzzled. Then there is some mumbo-jumbo about a secret chemical formula, the importance of which was unclear. These bits take away from the impact that the film could have had and make it seem long-drawn for a 110 minute film.

Fortunately, we have performers who rarely let us down. Even, Rajesh Sharma who is usually made to ham and go over-the-top, delivers a relatively controlled performance. The film's digs at Bollywood's over-romanticisation of all things Punjab and all things idealistic too. But, then again it submits to the formula – a one-man stand against the system – that's the only solution we can seem to think of, even as we speak of issues that exist in real-life. But, I guess, there are no better ideas out there and this one seems to sell.

Anyway, the one reason to look this one up is to get a peep into the eco-terrorism supposedly rampant in Punjab and hope against hope that it is only in Punjab. 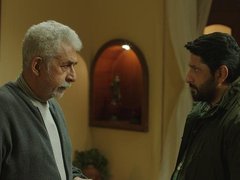 1 The lush green-and-yellow mustard farms that Punjab is famous for and romanticised by popular Hindi films.

Thumbs up, by Rohit Vats, Hindustan Times : ...Warsi reminds us of his 2005 Sehar. He doesn’t go overboard and underplays a sharp cop, a rarity in Hindi films. Shah displays a wide range which he has perfected over the years, and Dutta looks ruthless and ambitious as the corrupt CM. In between, Kelkar also throws in some punches. ... full review

So-So, by Baradwaj Rangan, Blogical Conclusion, The New Sunday Express : ...rada leaves you with a renewed appreciation for burning-issue masala movies like Kaththi and Kodi, which, for all their flaws, at least remember to entertain.... full review

So-So, by Bryan Durham, DNA : ...Ponder upon a somewhat lost opportunity. Films with social causes at its core work, but only if​ ​they manage to resonate with you in some way. This one doesn’t, at least not to the degree you’d like it to.... full review

So-So, by UDITA JHUNJHUNWALA', Live Mint : ...While there’s no faulting Irada’s intentions, the narrative is poorly crafted and clumsily executed. As much as it’s a treat to watch Shah and Warsi, the two song montages are irritants and the production values a big downer. Important issues are glossed over and exaggerated performances by Dutta and Rajesh Sharma (as Kelkar’s right hand man) add to the emotional disconnect. The surprise end is no surprise at all – a go-to twist used in several thrillers, including the recent Kahaani 2. ... full review

So-So, by Mohar Basu , MiD DAY : ...Full marks to the ambition, but this hotch-potch of a movie is good reminder that compelling movies are made of much more than a hit pair and a good idea.... full review

So-So, by Saibal Chatterjee, NDTV : ...It is easy to empathize with their crusade, but the film does not generate enough suspense and tension to make their investigation an edge-of-the-seat affair. ... full review

So-So, by Nandini Ramnath, Scroll.in : ...Parabjeet’s questionable actions, and the movie’s endorsement of them, also indicate that Singh’s resolve to tackle the economic roots of pollution and its relationship with cancer is weakening. Even though the resolution beggars belief, the high-powered cast and the director’s clear-eyed rage against the machine are convincing enough.... full review

So-So, by Namrata Joshi, The Hindu : ...If you aren’t aware of the Cancer Train that runs from Bhatinda to Bikaner and haven’t read reports about the “wheat bowl” that was Punjab turning into cancer epicentre then the film might be an eye-opener. If only it was a better made eye-opener. ... full review

So-So, by Meena Iyer, Times of India : ...There is also a sub-plot of a journalist (Sagarika Ghatge) seeking revenge for her dead boyfriend. Even this track is really weak. If intention is everything, you may feel kindly towards Irada. Unfortunately when it comes to a celluloid experience, story-telling is prime. Here, the film falters. ... full review

So-So, Zee News : ...Overall, the film is a sincere and decent attempt by the Director in her maiden venture. ... full review

Thumbs down, by Anna MM Vertticad, annavetticadgoes2themovies : ...That question is just a small part of the tragedy that is this new film. Punjab’s “Cancer Train” should be the subject of multiple Indian films and media reports. Little purpose is served though if you zero in on a crucial theme but do not breathe life into it. Irada (meaning: intent) is an opportunity lost to draw mass attention to a pressing concern. What a waste! ... full review

Thumbs down, by Aarti Iyengar, Bollywood Life : ...I wouldn’t recommend the movie to anyone who expects suspense, intrigue factor or even interesting plotline. The songs are unnecessary and the dialogues are way too dramatic! ... full review

Thumbs down, by Rachit Gupta, Filmfare : ...The use of CGI, the editing and the writing remain lacklustre and amateur at best. The only silver lining to Irada is its brief insight into the malicious world of corporation driven pollution and it's adverse effect on the quality of human life. For a film that had a subject as relevant as that of Udta Punjab, this movie turns out to be a major let down. ... full review

Thumbs down, by Johnson Thomas, Free Press Journal : ...Aparnaa Singh is unable to hold off the revelations until the last moment and as a result there’s little mystery in the telling. Parabjeet Walia spouting shayari at his book’s launch is revealing of the unaccomplished plotting that drives this film’s narrative forward. There’s purchase though in the eventual appeal to be more aware of such calamities waiting to happen—because of our own negligence regarding environment protection laws and their quasi implementation. While the film is interesting enough and a brave enough attempt it’s not something that plays out as memorable or compelling- and this despite the crusty performances of highly dependable actors like Divya Dutta and Naseeruddin Shah. ... full review

Thumbs down, by Vishal Verma, Glamsham.com : ...The bonding between Naseeruddin Shah and Arshad Warsi is also enjoyable but the director fails in possessing the skill to weave this individual goodness into a fine film and that's makes it meandering. ... full review

Thumbs down, by Surabhi Redkar, koimoi : ...Irada fails to make the required impact. The film’s purpose is to create awareness but it does so in quite a haphazard manner. A 2/5 for this film. ... full review

Thumbs down, by Jaidev Hemmady, Movie Talkies : ...The characters are caricaturish, the screenplay is loose, the editing is sloppy and the story hasn't been handled with the treatment it deserves. Even the scene involving the ‘cancer train', which ideally should have been bone-chilling, fails to make an impact because the rest of the film is so below average.... full review

Thumbs down, by Kunal Guha, Mumbai Mirror : ...Despite a scattered script, Naseeruddin Shah extends some dignity to this film with his signature matter-of-fact manner of channeling intensity. Rumana Molla, in her brief role, demonstrates her potential as an actor and does well in the emotionally charged scenes. Arshad Warsi seems to have lost his edge. His natural flair with comedy seems less spontaneous and barely effective. Sagarika Ghatge is compelling, even while the lines written for her keep her from delivering on her potential. ... full review

Thumbs down, by Manisha Lakhe, Now Running.com : ...Perhaps had they stuck to telling about groundwater contamination story like Erin Brockovich this movie may have meant something. But with factory blasts being made on the home compute by someone who did not finish their photoshop class, this film ends up being a waste of time. ... full review

Thumbs down, by Prasanna D Zore, Rediff : ...Irada, then, is a film that could have been a superb take on how the political-industrial-corporate (in no particular order) nexus is destroying and poisoning the world's food chain systemically even as it ruins young lives and shatters the dreams of their loved ones. ... full review

LycaDilse: Great reviews on #Irada ....there's a social message in it ! #mustwatch