The Imitation Game, a biopic on mathematician and code breaker Alan Turing, is a beautifully crafted film; it looks good, sounds great and feels authentic. Benedict Cumberbatch's performance as Turing enhances it further. Though it doesn't go as deep into Turing's psyche as it thinks it does, it still makes for a thoroughly engaging film.

Right at the start of the The Imitation Game, the central character of Alan Turing speaks out in a voice-over, asking someone (as well as you, the audience) to pay attention to whatever is going to follow. This act, of trying to coerce the audience into paying attention and understanding what's being said & shown, either by being blatant about it and stating it aloud as in this case, or by repeatedly reinforcing an already established fact or event, is perhaps the biggest problem with Morten Tyldum's film.

It happens time and again throughout. If this had been avoided, and more time was devoted, instead, to unpeeling more facets of Turing's personality, the film could have been a masterclass in how to make a period biopic. Then again, the film as it is currently, still makes for a racy, engaging, at times even heartwarmingly funny, experience.

Based on the life of mathematician Alan Turing, whose work in designing and building computing machines played a large part in the Allied Forces' victory over Nazi Germany in World War II, The Imitation Game works because of the stunning real life story of Turing, as well as Benedict Cumberbatch's impassioned portrayal of the man. 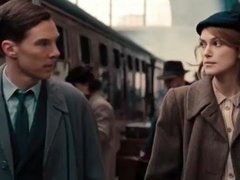 The most brilliant minds usually belong to the loneliest, most eccentric of people. Alan Turing was what one would consider a 'deviant' in more ways than one. While the bulk of the film is spent on Turing's work in cracking the codes enciphered by the German machine Enigma, the film also flashes back to Turing's youth intermittently, as we get to know a bit of why Turing was as he was in his later years.

He was an unsung hero for the longest time, Turing; so the film is emotional, edgy and always intriguing. The film also touches upon a number of sensitive topics that seem just as relevant today than they did back when Turing was alive. The casual but rampant sexism that existed back then, for instance. Again, these are only scratched at the surface.

Eventually, the film does make the point that just how a man and a machine think differently, even two different individuals can think differently. Logically, it follows that there is no right and wrong, no clear moral or social lines, despite what history and society have conditioned us to believe.

The Imitation Game gets the period look and feel spot on, but perhaps the biggest contributor to making it truly immersive almost throughout, is Alexandre Desplat's background score. Though it isn't the most original sounding score around, it always works in tandem with the emotional timbre of the scene, playing the role of glue between the hearts of the audience and the characters.

Then, there are the performances. Benedict Cumberbatch consumes Turing (or the other way round), with every twitch, every mannerism seeming like it came from somewhere deep within. It isn't a flawless performance, only because one can see shades of his Julian Assange performance here as well. But the soul clearly overshadows the craft, leading to a thoroughly effective portrayal. The gorgeous Keira Knightley, with her crooked teeth and lanky frame, warms your heart with a performance that balances strength with vulnerability.

Like I mentioned earlier, one can't help get the feeling that the film doesn't seem to want to go into what Turing really was like deep, deep inside. It delves into plenty of facts, yes, but it could have been so much more powerful if Tyldum hadn't chosen to make a simple story seem like it is a complex tale. The deepest, darkest layers of Alan Turing, it seems, are destined to be an enigma, much like the man himself. This film on his life, though, is a well-crafted, gripping film.

Suman has given this movie a Yay! Thumbs Up. Suman has posted 135 comments and has rated 125 movies. See Suman's page for more details.
Anuj

Truly outstanding movie on the tragic life of the world's greatest mathematician and war hero ever!

Anuj has given this movie a Yay! Thumbs Up. Anuj has posted 1145 comments and has rated 126 movies. See Anuj's page for more details.