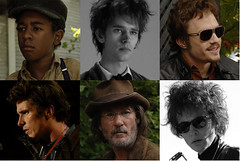 A Contemplative fantasy about the artiste Bob Dylan portrayed through disparate characters and a non linear narrative.

Bob Dylan has remained and remains a source of endless frustration for his fans, critics, and foes. Ceaseless speculation about his motives has followed him throughout his nearly fifty years of recording and performing music. His music stubbornly refuses to be categorized. He has been hated, vilified, adored, and glamorized. So how does one talk about him when sheaves of words have been said? How does one understand who the “real” Bob Dylan is? How does one go about trying to make a film about his life?

Director Todd Haynes wisely eschews any attempt at making a documentary or a biographical epic; what he does instead is to visualize Dylan as six different characters none of whom bear the name Dylan. These characters could either be interpreted as different stages in the life and evolution of the artist, or they could be seen as an attempt to decipher what Dylan means to the soul of America, based on what is known of his life and times, as well as his repeated attempts to redefine his persona. Or they could just be the fabrications of the director, as he attempts to grapple with the constantly shifting shadows cast by Dylan’s multiple psyches. Take your pick.

The film does not have a plot as such; what we have are multiple strands portrayed by the different characters with each strand connecting and interconnecting in a complex weave. The film opens with a grainy black and white point of view shot of a performer being escorted onto the stage; we go up the steps, past various ushers, and then into the blinding light and noise of the stage; the viewer is reborn into Dylan’s world.

We see Dylan as a young eleven year old African American Woody Guthrie riding the freight train complete with a guitar, as Arthur Rimbaud who appears to be deposing before some sort of committee / press group, as Billy the Kid, as a film star Robbie, as a folk singer Jack Rollins, and as an electrified, druggy, Jude Quinn. It is Jude Quinn that the director seems to love the most. Quinn is played by Cate Blanchett, and she is turned in a virtuoso performance. Elfin, gamine, cynical, whiny, gaunt, riddler, jester, trickster; she does it all with such panache. Her mannerisms, her walk, all bring back the Dylan of the early 60’s. Christian Bale is perfect as the early Dylan, all hunched up mumbler. The late Heath Ledger is Robbie, a cross between James Dean, Marlon Brando, and Al Pacino. Richard Gere looking slightly addled and world worn, is Billy. All the characters seem to have been chosen for their links to Dylan’s life and music. To comprehend what each of these characters mean in the context of Dylan’s life and times, one would have to be familiar with the myth, magic, and music of the man.

The visual palette of the film is stunning; each segment differs according to the time period, grainy black and white footage for the late 50’s and early 60’s, green pastel shades with glorious yellows for Billy and Woody, and dark brown and blue green frames for the 70’s segments of Robbie. The frames are technically superb in terms of the colour and visual design; they immediately transport the viewer into the respective time period. The frames also show us some of the most singular faces shot in black and white and colour; working men, African Americans, women and children. Subtitles are not used to state the year and month; instead the director lets the viewer grasp time instinctively. This renders the film as memory, a personal memory with no clear cut dates and markers. The director thus suggests that the film is not a history or a document or a record of times past.

The best visuals are reserved for the Jude Quinn sequences; completely Fellinesque, surreal and hallucinatory, they are a potent elixir. There is a phantasmagoric Andy Warhol party sequence, complete with projection walls, sharp black and white contrast frames, and the people all clothed in cool. References, cross references, and allusions abound throughout the film but the director makes no attempt at analysis or explanation. For viewers who are unfamiliar with Dylan, this film does not offer any clues. In that sense it is not at all like a conventional biopic that explicates significant events in the character’s life. This film is instead an adroit amalgamation of all that Dylan was, could be, and possibly will be. And through it all runs the music; sensational, stirring, heart stopping music. The music is used at key points to enhance the visuals; a love affair and its eventual disintegration is set to Visions of Johanna, I Want You, and a Simple Twist of Fate. Which other director could be this lucky?

We see the “real” Dylan only at the end; a few minutes of footage of Bob Dylan improvising on harmonica on what sounds like I Want you. But before that we have seen much, much more; of all the images, the image of Jude Quinn gazing into the camera with a quixotic amused expression stays with us. So does the sound of the harmonica as it blends with the whistle of the freight train and resounds in the valley.

Dylan rides free as we speak; Billy says in the last lines of the movie “It's like you got yesterday, today and tomorrow, all in the same room. There's no telling what can happen.”

Yay! Thumbs Up, by Enjoylyrics.com : The film does not have a plot as such; what we have are multiple strands portrayed by the different

Yay! Thumbs Up, by Lyricswale.com : It was running in Inox Pune for a week. Do check out the NDTV Lumiere site to keep yourself updated

So-So, by Hindilyrics4u.co.un : The film does not have a plot as such; what we have are multiple strands portrayed by the different

Inspired “by the music and many lives of Bob Dylan” (as the credits announce), the film has no fixed plot. Rather it situates its characters in different time periods and is in many ways biographical.