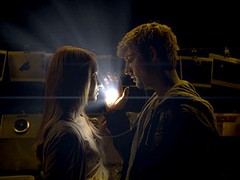 I am number four

Nine kids are being hunted down by Mogadorians from the planet Lorien, and John Smith is Number Four. With good action and typical story, this film is bitter-sweet.

So here comes another movie that is based on superpowers, mysterious aliens, and leaves scope for sequels. The title and the narration sound great, even though the trailer doesn’t look very promising. John Smith (Alex Pettyfer) and others are being hunted down by Mogadorians, and he is fourth on the list.

The action is really good. It is fast, opens the film brilliantly, and has special effects that I loved. Add to it the sound effects and it’ll keep you on the edge of your seat. But these action scenes last for a very small duration. And the plot is so typical that it’s depressing. The worn out terrain of good against evil has been moulded into a teenage story. The movie doesn’t even focus on the alien-vs-alien-on-earth concept.

The direction was a little disappointing too. I mean, people don’t go to high school photography labs and make out when the bad guys are right behind! Clichés are used to the fullest - ‘blending in’ immediately translates to wearing the hood of a jacket. And John’s guardian, Henri, has 4-6 computer screens only so that he can delete any pictures of John on the internet. There of course was a lot of unbelievable stuff mainly because it was executed very unconvincingly. Like say, what stone glows so bright blue in blazing sun? Dialogues have little punch and little taste.

They concentrated more than necessary on the love story instead of plot development. No flashbacks, no villains histories, no heroic escapes were shown or even talked of. Plus there are no explanations to why things happen the way they are. And whatever little explanation is given is far from satisfying. For example, why are the 9 of them being hunted down, or why are the bad guys so bad? Let’s hope they come up the explanations in the sequel.

The love story is a boring teenage tragedy. One could easily fall asleep in that part. I should admit though, that the performances were surprisingly good. Okay, at least better than the Twilight Saga. Timothy Olyphant who plays John’s guardian, Henri is worth a mention. Even if he is over protective, there is concern and passion in his eyes – something I believe is hard to do. Others are decent for amateurs.

And like a friend said – the movie would definitely have sold better if it had been named ‘I Am Number Six’. Teresa Palmer plays the hot, confident Number 6 who is also being hunted down, and watches John’s back. Hot chick, hot action, hot bike. What else do you want?

So if you want to get the best out of movie, watch the action, sleep through the high school drama.

Yay! Thumbs Up, by Jamed Mercado : I'd seen lots of Alien film turn hero, but most of them are played by well known actors

Nay! Thumbs Down, by Tamillyrics.co.in : *