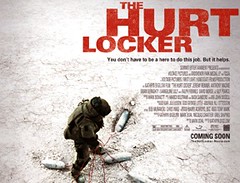 Don’t expect a lot of explosions and gunfights in this film. The Hurt Locker is not your typical war movie. It is a film that shows the monotony in the face of danger. Go without any pre-conceived notions and chances are you’ll appreciate the film and empathise with its protagonists.

There was a time not very long ago when American war movies were all about patriotism and sacrifice. The last few years however have contributed a lot in the changing of this perspective. The noughties began with the fall of the Twin Towers and ended with the Rrecession. Somewhere in between these two grand events Bush started his infamous Iraq campaign that would change the way the world viewed at war. The initial jingoism has now given way to weariness with movies now focusing more on the man in the bunker, as the reasons he was fighting for become more and more meaningless.

The Hurt Locker is one such film, set in Iraq and telling the story of an elite bomb disposal squad. It is as much a story of the insecurities of the commandos as it is about the lack of choices for one man -- Sergeant William James (Jeremy Renner), who smokes cigarettes and goes about disposing explosives like he’s taking a walk in the park.

James is good, heck he’s brilliant -- in tune with the wires and the bombs he is about to defuse, at times even respectful to the person who has assembled the circuit. He is very sure of himself, at times so sure he doesn’t care to wear his protective suit! But he is also very reckless, leaving Sanbourn (Anthony Mackie) the man in charge of watching his back, in a very unenvious position.

So there you have, Sanbourn a complete contrast to James, working with him and trying his best to protect him and perhaps his own ulcer.

But Hurt Locker isn’t a film that dwells so much on the contrasts as much as it shows the monotony in the face of danger. Director Kathryn Bigelow manages to achieve this with her hand-held camera movements, lack of background score, some superb close-ups and a narrative style that puts you in the heat of things.

The Hurt Locker in a sense is not a typical war movie. There aren’t as many explosions you might have wanted and definitely not as many gunfights either. Instead there are portions in this movie when absolutely nothing happens. There is no music and there are very little visuals. At one point the screen goes entirely blank for a good few seconds. The beauty of this film lies in these moments. Bigelow manages to take you right into the scene of action and the slow pace only goes to show how killing anticipation can be.

Having said that though, it also must be said that The Hurt Locker isn't a conventional entertainer that will make you walk out of the theatre and say a-ha! It gnaws on you, tests your patience to the point that you want Sanbourn and James to go home. I might also go to the extent of saying that perhaps you might also walk out of the theatre feeling somewhat disappointed because it doesn't fit into the parameters of a 'war movie'.

But if you are patient enough and perhaps a little considerate. You might just understand what the sniper lying in one position all day waiting to shoot is going through.

The director treads the line between action and suspense very well. You see things from the protagonist’s mind and see just what makes him do what he does. Sure, James is the hero of the film. And for a lot of his colleagues he probably is a war hero? But does he consider himself to be one is a question that Bigelow attempts to answer. And she does a very good job at it.

Yay! Thumbs Up, by Flixter

Nay! Thumbs Down, by internet gaming

Hello! and buy caverta and indinavir and cheap estrace and order azulfidine and