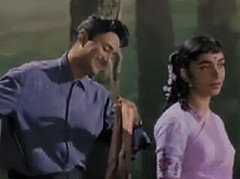 I thoroughly enjoyed this walk down memory lane, needless to say, mainly because of the poetry the film is. Both literally and figuratively. Of course, there are many-many elements in the film that would be completely unacceptable in our films today. But this one is for us to celebrate the man who will turn 88 this September 26th. And let's remind ourselves that he was just two short of 40 when Hum Dono released.

I'm not sure how much we'll enjoy the gold that old is, if we get too much of it, but for now, it's good to get a glimpse of the golden era the 60s was.

Romanticizing the beauty of an old film is only natural. And what with Anand (Dev Anand) and Meeta (Sadhna) playing out their mute romance in all its cuteness. Somehow, the inexcusable delay in dialogue delivery for dramatic effect seems cute. You tend to discount the amateurish portrayal of emotions by trying to transport yourself to that era. You tend to think of the difficulties the makers might have gone through to shoot those war scenes, the double role, the depiction of Anand's internal struggle. In fact, you admire the film for these reasons.

And along with that it makes its comment on the society that was then - the taboo associated with an unwed woman, let alone the hint at a live-in relationship; the futility of war and a philosophical question or two.

Those were the days of Sahir Ludhianvi. No metaphor, no simile, no pun - plain and simple poetry that makes its point. In just two lines he mocks all existential questions. And he does this with as much ease as he expresses that moment of separation between lovers even if it is just for a few hours. 'abhi na jaao chhod kar...' is there a couple who has heard this song and not referred to it. The playfulness of two people in love, the emotional blackmail, the moaning masked under that all-encompassing word 'LOVE' are all beautifully set to tune by Jaidev.

(if you leave (me with) this incomplete feeling day-after-day how are we going to sustain? 'coz love is demanding and life tests us what I say isn't meant to hurt, for it's no complaint, it's only love.)

Yes, I could go on and on about the songs from Hum Dono. Remember, I haven't even spoken about my other favorites from the film - 'dukh aur sukh ke raaste...' and 'mein zindagi ka saath...'.

Who are we kidding? Take away the songs from the film, and Hum Dono would barely be known to our generation. Of course, there are some very strong dialogues too, but they sound way too profound because of their pseudo-preachy tone. A line that stayed with me even though it was rather out-of-context is, "thukraaya hua pyaar kabhi bujhta nahi, dhuaan udta rehta hai" (unrequited love never dies, it always comes back to haunt you) will sound only 'blech' in a film made today. And that I think is the power of pure language, no SMS-ese, no Hinglish. How else could that simile with a burning cigar helpfully letting out smoke on the screen have worked?

Actually, Hum Dono must be on very few "favorites" list. It has its share of screeching violins that amplify the already melodramatic moments. And the twists go far beyond believability. Even if you believe there are six faces in the world that are similar to yours and even if you believe Anand (Dev Anand) coincidentally lives in the same city and is a soldier in the same platoon as his look alike Manohar (Dev Anand), what happens in the second half of the story is at best, comical.

And despite that, the showdown between each of the women and Dev Anand are moving. You feel for Meeta's (Sadhna) frustration when she feels that her wait for Anand's return has been in vain and Roma (Nanda) touches you with her single-minded devotion to her husband. Again this is because you are travelling back in time. Today in all likelihood, she would be a mere laughing stock. But these films from yore are such a lovely reminder of our innocence. And am I glad I could watch it in all its glory.

I love watching films in theaters. Other than the obvious reasons - better picture and sound quality, general ambience, etc - it is the fact that, the film was made to be viewed like that which attracts me to the cinema hall. So, even though oldies like Hum Dono might play on TV, such re-releases are our only chance of catching them on the big screen. While I wouldn't mind seeing the black and white versions. But, if sustaining an almost three-hour film takes a little color in this special-effects age, so be it.

The colorization added as much as it took away from the film. Sure, glitches like only one of Sadhna's eyes had make-up on are negligible. But, the inconsistency in camerawork, namely the choppy switch in and out of soft focus became even more glaring with the use of color. On the other hand, the pastel shades make each frame a painting of a jaded-yet-beautiful texture. Almost like it doesn't want you to forget the dated value system it advocates.

And if you are one who can watch a film for its paintings and its poetry, make sure you have that special hand to hold with you. For the love of its music and lyrics, I wish I hadn't watched Hum Dono alone. 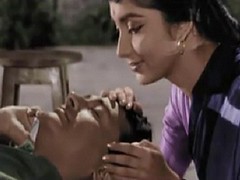 This shot of a woman trying her best to be there for her man, is etched in my memory.

Yay! Thumbs Up, by could-be-me

Yay! Thumbs Up, by John : I like Dev Anand movies. The songs mostly melodious and beautiful.

Yay! Thumbs Up, by LOLcoolj : Awesome

Yay! Thumbs Up, by manohar : Great movie. Great performances and very refreshing- clean , neat and just different. - must a watch

@could-be-me :) shukriya, karam, meherbaani...
and yet there is so much more to talk about :')

@Arvind well, I've never been a fan of melodrama and over the top acting. the film is good, and loved its simplicity.

But, today's movies aren't all bad. they might not have the same innocence, but the audience has changed also the medium of cinema has grown older, change is inevitable. given that, there is hope :)