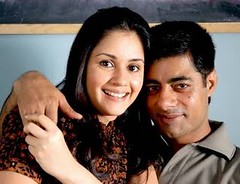 With sub-plots repeating themselves, the entire plot leans towards boring. But it's realistic enough for you to sense your housing society on the big screen.

NOT A REVIEW - Just curious to see on screen what I've been following for almost a year on the movie's blog.

I'm sure all moviemakers are as passionate about their product as the team of Hulla. It's just that you can read their experiences first hand on their blog. There are snippets of their experience from the pre-production days all the way till the constant postponement of the release.

It all seems unedited, because you can hear the Chief Assistant Director complain about the rest of the crew. Similarly you see the director talking about his vision and insecurities. He also pours out his angst against all and sundry - from his frustration with the producers, right down to the costume designer. He talks about what he learnt from the way his core team disintegrated. He even makes a generalized comment on FTII alumni.

The responses to the film from unlikely sources make me feel optimistic, but I daren’t give full rein to it. High standards, low expectations – as Indian Ocean’s Rahul Ram says. The Foley guys loved the film, the DI people made a special reference to how “enjoyable and fresh” it was, the Dolby guy said he was “pleasantly surprised” at how “intelligent” the film is, and the Censor board viewing had a member calling up a person from the cast he knew and raving about the film. These are people who see several films a week, and are not given to undue enthusiasms, so who knows what signs their reactions bear? But the film and its creators have been through too many disappointments in the last 4 years, so enough said.

I, for one, am as eager as ever to watch a mostly fresh crew make its debut.

Noises in his apartment society made Raj Puri (Sushant Singh) a cranky man. This irritability introduced his wife, Abha (Kartikadevi Rane) to a new facet of his personality. The same crabbiness egged the middle-class secretary of the society, Janardhan (Rajat Kapoor), to take more pride in implementing the safety measures causing the crankiness. Repeat. Repeat. And repeat once more. With each round though, the aggravation increased. A piece of anyone's life - the noises replaced by any other irritant that cause tiffs in apartment complexes. But, the repetition made me too lazy to even yawn.

Sure, the simplicity of the plot had a Hrishikesh Mukherjee feel to it, and so does the style of narration. But Hulla misses out big time on keeping me engaged. Though, the underlying commentary on the sham that security systems are was amusing, staying attentive throughout was an effort. And I assume it was intended to be a light smile-your-way-through comedy, but these smiles were only occasional.

None of which can be blamed on the lead cast. The noises begin annoying you as a viewer despite Raj's clearly unreasonable demands. Thanks to the pained expression Sushant so consistently carries. It's just fascinating to watch the man behind most of the pain, Rajat Kapoor. Watching him as a struggling businessman from a not-so-affluent background was refreshing and it looked like he was enjoying the difference too. The casting of the two is really creative and has worked, because on paper anyone would have been tempted to swap them. Hail versatility!

It is very obvious that this is a fairly low-budget movie from the relatively low-profile cast and the out-of-focus scenes every once in a while. And yet, something different has been tried. Interestingly, though, another "housing society + stock exchange" themed movie has released on the same day! Anyway, there is this urge to tell a simple story well. It might not have succeeded completely this time. Come on, how much of another person's boring problem can I be expected to watch? But I'm sure the movie-makers, especially the writers will learn from their follies and meanwhile members of the audience like yours truly will learn to deal with ennui.

Thumbs up, by Shubhra Gupta, Express India : ...The plot’s simple. But the treatment makes it a whimsical, affectionate study of people... full review

Thumbs up, Live Mint : ...While the satire in ‘Hulla’ isn’t as heartless as it needs to be, it’s certainly dispiriting for anybody who believes that Mumbai is India’s urbs prima.... full review

Thumbs up, by Anurag Kashyap, Passion for Cinema : ...What no review saw in the first place was that here Sushant’s Raj puri was not the protagnist and Rajat Kapoor’s “Janardan” was not the antagonist. They were just two characters at different ends of a problem... full review

Thumbs up, by Kenny, Passion for Cinema : ...Hulla had me and even my NRI buddy laughing from start to finish, and it did so without insulting my intelligence, which is all I bloody ask of a movie... full review

Thumbs up, by Subrat, Passion for Cinema : ...It’s an intelligent film that takes its intelligence lightly and yes, almost flimsily.... full review

So-So, by Martin D'Souza, Glamsham.com : ...Rajat Kapoor as the building secretary who is also into investing in shares apart from his private business enacts his role to the 'T'.... full review

So-So, by Rajeev Masand, IBN Live : ...Hulla doesn't quite work in the end because it overstays its welcome... full review

So-So, by Taran Adarsh, IndiaFM : ...After setting up things so beautifully in the first hour, you expect an encore in the second hour. But it's not engaging at all... full review

So-So, by Deepa Gahlot, MSN Entertainment : ...there's only this much it can be stretched.... full review

So-So, by Goher Iqbal Punn, Radio Sargam : ...To send laugh on the viewers’ face is difficult and the film certainly tries to send smiles.... full review

So-So, by Patcy N, Rediff : ...The film seems to take you to a high pitch, and then drop unexpectedly.... full review

Thumbs down, by Sanskriti Media, AOL INDIA : ...The director seems to have never lived in Mumbai. The protagonists Raj and Abha have presumably shifted to a Mumbai suburb to find peace!... full review

Thumbs down, by Preeti Arora, Buzz18 : ...Unfortunately, the humour has been handled in a clumsy, slipshod fashion... full review

Thumbs down, by Aniruddha Guha, DNA : ...When you start to think that the film is drawing to a close, you are greeted with the 'Interval' sign... full review

Thumbs down, by Khalid Mohamed, Hindustan Times : ...thanks to the believable performances by Stockbroker and Chairman, you don’t actually run out of the auditorium to check your own ear drums.... full review

Thumbs down, by Gaurav Malani, indiatimes : ...while his idea is novel, his approach is rather repetitive... full review

Thumbs down, by Meena Iyer, Mumbai Mirror : ...Varma even comes up with a few witty lines but post interval the film clearly loses steam.... full review

Thumbs down, by Anupama Chopra, NDTV : ...the characters and conflict aren't energetic or compelling enough to sustain a two-hour film.... full review

Thumbs down, by Eye TV India Bureau, SmasHits.com : ...hat's why the viewers were found saying that the writer has stretched the story too far, making the climax unjustifiable... full review

Thumbs down, by Nikhat Kazmi, Times of India : ...this could easily be one of the most exasperating attempts at humour in recent times... full review

Thumbs down, by Filmbear, Upper Stall : ...makes some unique observations on life in suburban Mumbai and at least these are noteworthy... full review

Raj Puri (Sushant Singh) cannot sleep because of the noises the watchman (Chandrachoor Karnik) is asked to make at night to prove that he's awake.