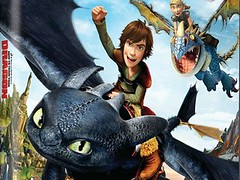 How To Train Your Dragon

Despite having a predictable storyline, How To Train Your Dragon has enough going for it to keep you thoroughly entertained. The animation is breathtaking (Dreamworks is pushing the envelope with every film), the action sequences are spectacular, as are the scenes where Hiccup takes flight with his dragon Toothless. One of those DVDs, which is a safe bet when friends come over and you don’t mind watching it again and again.

With a title like How To Train Your Dragon, one can almost guess what the film has in store. Human meets animal. Friction and resistance. Human tames animal. They become friends and so on.

Thankfully, the writers of this film have done a lot more to Cressida Cowell's novel by the same name, which is the original inspiration for this film. What's helped them is the faith, money and outstanding talent at Dreamworks, who’ve mounted this film on a scale that lends itself to not just spectacular 3D action, but also an immense feel good high, once it’s over. I say this because the story, could have easily been done in live action, but wouldn’t have been half as spectacular, nor convincing.

The unfolding screenplay doesn't take too long to establish the storyline and the writers do just about enough to maintain the excitement throughout the film's duration. Starting with the action packed opening sequence filled with fireballs and slaughter of a host of dragons, there are spectacular flying sequences with Hiccup mounted on top of the Toothless (the dragon) and Astrid, his love interest.

As a viewer, you know when you're watching them on screen flying in the clouds, how magnificent the film would have looked on the big screen, but since it’s on DVD, I suggest the bigger your screen, the better.

HTTYD's real merit lies in being a wholesome entertainer, despite tracing a predictable storyline. About 30 minutes into the film, and you instantly know how the story is going to shape out - the simpleton of the village will emerge a hero by the end of this film.

So here's why the film works. I've always believed that audiences have certain hotpoints in their senses that a film must touch upon, if it has to please. Goosebumps, feel good proceedings, elements that make you go “WOW” and “Woohoo!” – these are just some emotions and reactions to make a good, compelling film. Fortunately, HTTYD has all of that.

And since it’s on DVD, the bonus features, which include the making of the film and the director's commentary do more than enough to validate your liking for this film. Typically, your admiration for an animation film always increases once you've seen the efforts that went into its making. HTTYD is no exception. So, although Gerard Butler, the voice of Stoik, the village chief, doesn't get the meatiest role in the film, it is fun watching him behind the microphone. Ditto for the supporting cast, producers and team of animators, who bring their own stories.

For example, you'll learn that one of the most breathtaking shots in the film (when the frame does a complete U-turn in the sky), was cinematographer Gil Zimmerman's idea. John Powell's music has an enormous uplifting feel to it, so crucial for feel good, coming of age stories. And it was rather astonishing to learn that the animators actually went to a flying school to master the techniques of how birds and dragons would have taken flight. What’s more, the creative team also ensured that since it’s about dragons, there must be all kinds of them. And since they breathe fire, there is also a variety in the kinds of fire they spew.

Possibly, that's just one of the reasons why it’s a great idea to own it on DVD. Because you learn to appreciate the enormity of effort that actually went behind making every little scene, every sequence.

HTTYD is one of the top contender's at the Oscars and Golden Globes next year. I think it stands a fair chance, considering it’s a breath of fresh air, outside of the typical animation film clichés that we've come to know of - world of ants, monsters, fish, robots. Although, it doesn't make any powerful statement like Wall-E did, or evoke similar emotions to last year's winner Up, I think it still does enough to stand tall and be proud of itself in a highly competitive category. I'm sure that on your DVD shelf, it will behave similarly.

Set in the village of Vikings, who are often attacked by pests (read dragons), HTTYD tells the story of Hiccup, son of the village chief Stoik who uses his invention to shoot down a much sought after, but highly dangerous dragon. Soon he discovers that he hasn’t killed it all and unlike a typical Viking, cannot get himself to slay it. What initially begins with resistance eventually develops into friendship between Hiccup and creature which he names Toothless. His interaction with the cute-but-fire-breathing dragon makes him realise that humans have misunderstood the dragon species completely. How he comes out in the open about his friendship with Hiccup and convinces the rest of the villagers about their true merit, forms the rest of the story.

How To Train Your Dragon - Cast, crew, links