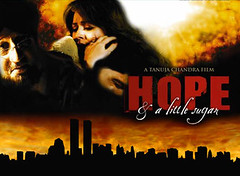 Interestingly, while the producers found the script interesting at first look, a lot of back and forth seems to have happened over the net between the two writers. Not to mention that location recce-ing, dress designing and editing happened over the web too!

the production mirrored the cross-cultural energy of the story itself in any number of ways. Bridging the geographic and cultural gap between Manhattan and Mumbai with hundreds of emails, Russow and Chandra worked night and day re-crafting and polishing the script... ...The cast was assembled in both India and New York, with screen tests streamed online to both locations for approvals. Similarly, costumes and set decorations were developed and created by teams working in both India and New York... (Director Chandra says)... the producers would get pieces of the film edited and I'd see the edited version online and note down the changes that I'd want them to make...

I'm sure a lot of things are done over email in any movie, but it seems to have been used extensively here. Makes me really curious to see how it has translated on screen. Other than that there is hardly any news around this movie.