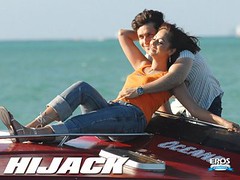 There's absolutely nothing new about this thriller. Besides, the plot details are either missing or incoherent.

Had it been one of the first few thrillers ever, Hijack would've been exciting. But, with all the logistical gaps and happy coincidences, it is far, far away from making your nerves jitter.

Not that characterizations are first on priority in most action thrillers, but all the characters including the main ones in this one are mere outlines. Let alone having shades to add depth, only one color is chosen for each of them. Especially annoying was Priya (Capt. Vikram's daughter) who is so cheerful despite the most trying circumstances. So strong is this 8-10 year old that she is all smiling on her way to the hostel for the first time even though her father can't control a tear from rolling down his eye.

In a movie where almost everything is below mediocre, you don't really expect the best lines for the characters. But, airport ground staff spewing philosophy at a passenger while checking him in is a bit too much. Considering the one-line character sketches and the lame lines, most actors seem to have done a decent job of smiling and being scared.

The logic and logistics of the writing too were haphazard. A terrorist gang is so meticulous about planning, that a gun is planted into a chips packet to enter the airport and it reaches fine. But, they take a flight to Amritsar, when they want to go to Dubai without thinking about fuel replenishment!

Not all is completely bad. There are a couple of subtle scenes which add flavor to the particular sequence. Like the little boy fetching a phone for a senior terrorist at a rugged training center implying that children were being trained there too. This scene replaces the kids-crawling-under-barbed-wire drill which is customary in showcasing such camps.

I really wonder what purpose is served by generic lyrics set to regular music, picturized with aerobic-style choreography? The story certainly doesn't need them. If the producer needs them for commercial success, I certainly hope the audience is not fooled by a supposed-Brazalian miming Hindi.

Hijack is the 'leave your brains behind' kind of an action-thriller, Just like slapstick is a kind of comedy. Slapsticks don’t make you laugh, Hijack has neither creative action nor manages to thrill.

Thumbs up, by Aditya Mehta, Buzz18 : ...The first hour of Hijack is rather slow, and meandres unnecessarily around the plot with scenes and songs that are not required.... full review

Thumbs up, by Sonia Chopra, Sify Movies : ... Shiney Ahuja proves yet again his ability to play out each emotional range of a character impeccably.... full review

So-So, by Daliya Daspurkayastha, Business of Cinema : ...The film concludes well but loose interest in the middle.... full review

So-So, by Taran Adarsh, IndiaFM : ...In his very first outing, he chooses a story not many debutantes -- even established names, for that matter -- would dare to tell: Hijack... full review

Thumbs down, by Nikhil Kumar, Apun Ka Choice : ...as painfully predictable as the horoscopes in cheap tabloids.... full review

Thumbs down, by S Viswanath, Deccan Herald : ...Touted as an action thriller, Hijack, tailored to suit Shiney Ahuja to a T, and others cardboard caricatures, hurtles towards its cataclysmic end-game, signifying nothing... full review

Thumbs down, by Martin D'Souza, Glamsham.com : ...the question topmost in my mind is what did Esha Deol see in a bit role as an airhostess in HIJACK? ... full review

Thumbs down, by Rajeev Masand, IBN Live : ... it's hard to imagine how actors and producers signed up to be a part of this venture... full review

Thumbs down, by Gaurav Malani, indiatimes : ...the hijackers seem to be quite undecided on their demands... full review

Thumbs down, by Mayank Shekhar, Mumbai Mirror : ...This brooding loner of ours (Shiney Ahuja) is the source of most fun actually. Even Rambos have a past. ... full review

Thumbs down, by Subhash K Jha, Now Running.com : ...Painfully puerile and designed to put you off cinema on counter-terrorism forever, "Hijack" is a clumsy, amateurish take... full review

Thumbs down, by Elvis D'Silva, Rediff : ...The passengers are a series of hastily sketched out clich?s that redefine the very concept of clich?... full review

Thumbs down, by Harshita Kohli, StarBoxOffice : ...All in all Hijack might find takers for its action but that too is not very original and most of it far fetched... full review

Thumbs down, by Nikhat Kazmi, Times of India : ...same old boring, bearded, belligerent jehadis -- that has been discussed threadbare in film after recent film... full review

Thumbs down, Upper Stall : ...The opening of the film best describes the style and nature of the film: glossy and superficial.... full review

A group of terrorists want the Government of India to release the head of their organization from prison. To get this done, they hijack a passenger plane.