Even a downright-simple idea, minus standard narrative structure, could be an intriguing journey.

A 30-something, corporate executive and his pregnant wife argue endlessly on their road journey. As this light spat prolongs for more than one would expect, I start wondering where this ride is headed. He is stuck in the rat race, while she is a god-fearing, saas-bahu-drama-addict. Her words make him a usual, oppressive husband, but she appears no less than a drama queen either. Their actions speak louder than their words. This isn’t the case with the couple alone, but the other characters as well. But just when you feel like you know these people inside out, Highway shows you the other side of the story. It shows you why objects in stories, real or reel (digital in this case), can be contrary to what they appear. The couple's mode of conciliation, or silencing the other is beyond one’s imagination or conventional sense. No wonder I’m still laughing my guts out as I recall the moment.

When a movie has more than 35 characters, it either ends up getting very complicated or over-simplified. To start with, a myriad of subplots, involving diverse characters and sub characters during a single journey, means taking the road less travelled. Especially since, all these characters come from different walks of life. Each one of them has a different social, cultural and emotional background than the other. They have their respective needs as well.

In addition, these intricate layers are laid out humorously, while still sticking to its principal voice - one needs seasoned hands at helm. Who else is better suited to do that than Girish Kulkarni (writing) and Umesh Kulkarni (direction)? It doesn’t surprise me seeing the Kulkarni brothers, as I fondly call them, do it almost perfectly. 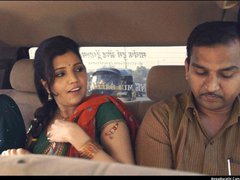 A young guy comes out of a Bombay chawl, with a skyscraper in the backdrop, as the flick opens with some tense musical score. It could probably be a way of depicting social divergence. No matter how great it would be in context, I find it irrelevant though. Moving on, you encounter seemingly regular individuals with easily-identified traits. And this is a key behind Highway’s staunch realism. So when you see an impatient NRI treating his driver unkindly, you are quickly familiar with him. Not because we see NRIs that way, but because Girish’s portrayal alone says a lot about his backstory than when he himself reveals it later. Girish is so outstanding that with each film he is raising the bar, be it scripting or acting. I am already looking forward to Jau Dya Na Balasaheb, his directorial debut. Fingers crossed!

Thanks to the detailed treatment it requires, almost half of the runtime occupies setting up of characters. But thoughtful writing ensures that you stay hooked even without the typical guidelines. Strangely enough, Highway doesn’t really have a one-line plot. Several elements come together as a coherent force, making it seem like there is some sort of spoken or unspoken central story. As we observe our own reflections in these characters, we feel convinced about that illusion. The trick works. Of course, that’s the beauty of symbolism, philosophy and our perception. Yet, I was sorely let down by too-much-revealing dialogue with which characters divulge their thoughts rather than letting me figure them out. Communication is not bad, but they do sound overly obvious and contextually repetitive in certain cases.

Highway is crammed with an endless list of stellar actors. It is tough (but also a shame) that each one’s contribution cannot be mentioned here. Quite a few characters act outlandishly all of a sudden in the end, while some of them don’t really influence the narrative. Despite these forced, flawed character developments though, the performances stay with you. The same goes for lots of subtle details that add significance in a broad sense.

Camera ensures both chaos and composure, maintaining the mood of the given situation. Though the photography isn't necessarily impressive, it pretty much does what a scene requires. The sound design, along with terrific songs, complements the visuals flawlessly. I am tapping my feet in one moment and feeling grief in another. But the sound is not always perfect here. A dialogue happening outside a car sounds the same as you would here it from the car. Either it could be a technical glitch at the theatre or a creative liberty. The first one doesn’t seem likely, while the second one makes little sense. Fortunately, though it is important, it isn’t a defining one in your perceiving of the film.

The climax though, is a lovely way to end the journey, or give rise to a new one. While we’re thrusting on the highway of life, we seem to be moving ahead. But just like the characters in the film, all of us are actually trapped within. We’re more worried about reaching the destination than relishing the journey. B. R. Tambe’s famous verse is a metaphorical tribute to that. It’s an expedition of inner discovery, something very hard to articulate. And there is no preachiness involved. The Kulkarnis let you discover that. As a result, the film’s strange posters with an even stranger tagline make profound sense.

Highway is not the first of its kind. It isn’t perfect either. But a very few manage to break the barriers of ‘art vs mainstream’ as lucidly as this one does. Such a rarity!

Yay! Thumbs Up, by lll : kkjkk