Beautifully shot and acted, Spike Jonze’s Her touches a chord deep within, because it talks about one of humanity’s greatest fears – loneliness. Yet, it does so while always tickling you or charming you. A simple, powerful story of relationships, Her is a film that must not be missed.

Spike Jonze’s Her is primarily about loneliness. Everyone is connected to their computer at all times. But to each other? Not so much. Wide shots of public spaces show almost everyone walking by themselves, but look closely, and they are all talking. You’d be forgiven for thinking that they’re all on the phone with a loved one. In fact, there’s a good chance they’re all talking to their computers.

Welcome to the future; where your computer runs your life even more than it does today; where operating systems have gotten so smart, they’re like a real live person to talk to; without a body, of course. In fact, it has become possible to develop a real relationship with them, with real feelings involved.

And yet, how fruitful can such a relationship be? Will the fundamental disparity between man and machine be an obstacle? Will concepts like commitment, fidelity, romance, intimacy and the likes ever manifest themselves within the existential realm of machines? 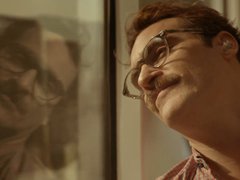 In this futuristic world, we are introduced to Theodore Twombly – the kind of man it is so easy to root for, yet one who seems to give off the air of desolate melancholy. A chance purchase – a brand new advanced operating system – introduces him to the unlikeliest of possible partners; his OS, who goes by the name Samantha.

The film, visually bathed in golden glows and flares, gives you that warm, fuzzy feeling throughout, despite the fundamentally cold theme of loneliness; it is funny and heart-breaking in equal measure. As we observe Theodore and how his relationship with Samantha develops, we begin to see that such a relationship, between man and machine, actually seems not only possible, but also probable in the near future.

There is a reason for Theodore’s loneliness, and there is a reason why Samantha is able to fulfill the gap, without being real in flesh and blood. Their relationship follows the most logical of paths, even though you’re never sure of whether you truly want to give your own personal stamp of approval to the relationship or not. The fact remains that the fundamental emotional needs of a human soul are unique to our species. No matter how far into the future we are, some things just will not change – the yearning for a warm hug, the need for physical companionship, the wish to have the one you love all to yourself – these are purely human traits, and nothing can change that.

Joaquin Phoenix plays Theodore Twombly almost perfectly. Here is another actor – like Daniel Day Lewis and Christian Bale - who seems to morph into the character he’s playing almost always. He wins you over almost instantly, and yet, you can see why he is a lonely man. What makes his performance even more noteworthy is that he doesn’t have a physical presence to react to. Samantha the OS is voiced by Scarlett Johansson, who is a joy to hear. She tinges her voice with the right amount of naughtiness, playfulness and sexiness. Amy Adams, another chameleon when it comes to slipping into characters, plays Theodore’s friend, and she is so natural, it is hard to believe she is acting.

But the true heroes of Her are the cinematographer Hoyte Van Hoytema, whose shots make the film a visual joy, and writer-director Spike Jonze. If his Being John Malkovich and Adaptation were written by the maverick Charlie Kauffman, this time he goes completely solo. The narrative is far simpler than his previous films, and yet, that in no way implies that it doesn’t have deft touches and layers that enchant you.

Her is a shining example of a simple, powerful concept with the right embellishments leading to a captivating film. Depending on how you look at it, it may leave you with a smile, or with a lump in your throat; either way, it is the kind of film that is hard to not be moved by.

Yay! Thumbs Up, by Anon

Yay! Thumbs Up, by Anup : Among the best of all time Hollywood movies

Nay! Thumbs Down, by Jonathan Green's Girl Gets Ring

Anon has given this movie a Yay! Thumbs Up. Anon has posted 1 comments and has rated 1 movies. See Anon's page for more details.
meetu

@Anon :P you are right, he's not "guest" reviewer any more. I've been meaning to change those words for a few months now, just gotten around to changing it in the back end. A program does that bit, so have to get the program changed. Will do soon.

@Meetu- U should that quickly,,,,because i do wait for pradeep’s reviews curiously,,,,and he is one of the best hollywood reviewer,,,,,,,,although he escape many movies (robocop has been in recent movies,, i dont know he will review it or not),,,,but he is the best......

Anup has given this movie a Yay! Thumbs Up(Among the best of all time Hollywood movies). Anup has posted 437 comments and has rated 108 movies. See Anup's page for more details.
Anup

When i heard that Hoyte van Hoytema will be the cinematographer of nolan in interstellar i was too much scared what will be the result....
But i was wrong and i would have seen HER earlier i wouldnt have doubted the capabilities of Hoyte van Hoytema ....... The futuristic looks of Los Angeles mixed with a little bit Shanghai were awesome (and i was too happy to see a near future which was neither over developed nor over destructed) ....
But cinematography is just one of the beautiful things in this gorgeous film.....That my statement will not end up tonight if i start on details..... But i have to say something....
This is just a love story nothing else , set in not present but after 30-40 years....A writer need not to be genius to write such a plot,,,,its just that instead of thinking how love happens in present world he has to think what could happen after some decades....And Spike Jones director for the forth time but writer for the first time has done a great job by making so simple but such a great movie......This movie truly show how much human being can loose their humanity in future because of their dependent on machines.......This is just a must watch film.....Among the best of all time....there would not have been any regret if last year instead of '12 years of slave' , 'HER' have got the award for best picture....Its not like 12 years of salve was not deserving ,, its just 'HER' was equally deserving.....

Anup has given this movie a Yay! Thumbs Up(Among the best of all time Hollywood movies). Anup has posted 437 comments and has rated 108 movies. See Anup's page for more details.