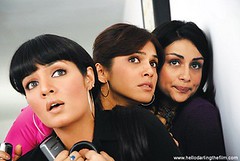 Hello Darling aims to take a decent premise and juice the sense out of it. It looks like it succeeds, even beyond the imagination of the makers. I understand drop in production values because of low budgets, but making fools out of decent actors is inexcusable.

I guess the point of Hello Darling is to bring the working woman's sentiment against the casting-couch-types out in the open. But isn't there a less crass way of doing it. If not, isn't there any new way to do crass? At least none involved in Hello Darling thought so.

Where does one begin the complaints from? sigh

After having closed my eyes and mulled over that one for a bit, I think my biggest grievance is against the way the actors were used. I admit, I was a teeny-weeny bit excited with the news that my teenage crush (this was in the "Videocon Flashback" days) Javed Jaffrey, is doing a male solo lead. I had hopes from the team that realized he could carry off a movie shared my belief that he can do more than slapstick. But, as you've guessed, that isn't meant to be. Not yet.

Other than Gul Panag, the women though are not really known for their acting prowess. But looks like she too has been made to pull a page out of their book in shrieking and making faces which are irrelevant or exaggerate or both. I don't think it is their fault either, I think they did exactly what they were told to do. And they clearly weren't asked to better themselves.

Same goes for almost each department of film-making. The dialogue was what goes with the slapstick - cheap innuendoes, scurrying around, slaps and all. The songs were there because they are "expected" to be there. Actors who can't do the Bollywood dance bit are made to dance, and Javed Jaffrey is on the bench.

So-So, filmi cafe : ...While the first half is quiet pacy and hilarious at places, the pace drops considerably after Vasu’s visit to Manasi’s house... full review

Thumbs down, by Bobby Sing, Bobby Talks Cinema.com : ...From the entire lot, only Gul Panag and Divya Dutta can be found acting a little with conviction and the rest collectively make it highly awful to digest. ... full review

Thumbs down, by Roshni Mulchandani, Bolly Spice : ...nothing short of a film that makes you want to puke.... full review

Thumbs down, by Taran Adarsh, Bollywood Hungama : ...This film is a joke in the name of comedy... full review

Thumbs down, by Lata Dar, Daily Latest News : ...utilizes every rule in the book to gather the attention of the audience but leaving a scene or two the film falls flat... full review

Thumbs down, by Renuka Rao, DNA : ...Jaitley looks and sounds awful with her lousy fringes and oh-so-fake Goan accent, while Dutta scrapes through as a Gujjuben... full review

Thumbs down, by Rahul Nanda, Filmfare : ...The movie, a direct lift from the 1980’s Hollywood film Nine To Five, could have been a brilliant sex comedy but completely fails.... full review

Thumbs down, by Deepa Garimella, fullhyd.com : ...A lot of chaos was intended, but since this is no Govinda flick, nor an Akshay Kumar caper, nor a Priyadarshan product, the film doesn't adhere to even basic standards of humour and IQ. ... full review

Thumbs down, by Joginder Tuteja, Glamsham.com : ...The scenes of seduction that follow are plain cold, while Javed's kidnapping is totally unbelievable... full review

Thumbs down, by Divya Solgama, Gomolo.in : ...The whole concept sounds interesting but sadly the film is nothing but drag and bore... full review

Thumbs down, by Aakash Barvalia, Gomolo.in : ...This film is made for the Bhojpuri movie lovers, and they will surely enjoy it.... full review

Thumbs down, by Mihir Fadnavis, india.com : ...It's just a bunch of body-function-based jokes and random scenes from the two movies and a few original goofs, but not a single one of them is laugh-inducing. ... full review

Thumbs down, Movie Talkies : ...What is really disappointing is that the writers, Pankaj Trivedi and Sachin Shah, who had earlier collaborated on the hit comedy, 'Kya Kool Hain Hum', fail to come up with a script that works this time round.... full review

Thumbs down, by Saibal Chatterjee, NDTV : ... Does Hello Darling have any saving grace? Banish the thought. Even the usually entertaining Javed Jaffrey is reduced to a drab drone. ... full review

Thumbs down, by Preeti Arora, Rediff : ...Just when you are coming to terms with the general air of silliness, the director brings in the gay angle, the eunuchs begging at street corners and Javed Jaffrey running across the city in a pink nightie. ... full review

Thumbs down, StarBoxOffice : ...The character's name is spelled "Harddick", he gives "dick-tation" to his se(x)retary, he "protects" her like a condom would, and loves the way she does her "job"... full review

Thumbs down, by K K Rai, STARDUST : ... Gul Panag, the dimpled beauty of bollywood who plays the part of Mansi, impresses with her honest and sincere performance. In fact, of the three bollywood babes—Gul, Celina and Eesha—she seems to be most entertaining... full review

Thumbs down, by Pratim D Gupta, The Telegraph : ...Hello Darling is the kind of film that you wouldn’t wish even on your worst enemy.... full review