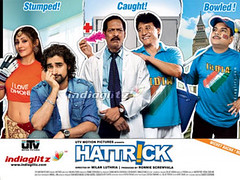 With hardly any relevance to cricket the story is very general. The actors do the best they can with the lame dialogues given to them. The music is loud and pretty much unpleasant (except the promo song).

There couldn’t have been a more generic story line. Replace cricket with any other obsession for the two cricket-crazy characters and the movie would be the same – awful.

I assume the movie is named hattrick because there are “three” story lines and they have some connection to cricket. There are three threads in the movie - Kunal Kapoor-Rimi Sen; Nana Patekar-Danny Denzongpa; Paresh Rawal with his family. So far so good. Kunal is a huge cricket fan – lame but OK. Danny Denzongpa is bowler turned coach. OK. Paresh Rawal – this is what I think happened here – the writer wrote Paresh Rawal’s story; dozed off while struggling to inject some cricket connection in the blank spaces (I wonder why); woke up to find that he had crossed the deadline for submitting it; and submitted what he had. Because the writer was late, the others did not have time to read it and started making the movie as is.

I think the most connection this movie had to cricket was the number of advertisements squeezed in – Reebok, Café Coffee Day, Starbucks, Tootsies, Kellogg’s, Fedex (and I am sure I missed some). If that is not enough to annoy you, there are the usual extra-bright blues, pinks and oranges you associate with a movie that has no qualms about taking cinematic liberties.

Connection between the three threads? Goodness, you guys have no limits to your expectations! They give you three stories (?) instead of one and now you want them to connect?!?

Nana Patekar, Paresh Rawal, Danny Denzongpa did what the script asked them to do and therefore no complaints from them, except for taking up the roles in the first place. Then there is Kunal Kapoor for those interested in drooling over muscular physique and Rimi Sen (with an overdose of make-up) for those interested in looking at sexy seducing women. They serve their purpose well by having a tough competition for the who’s-going-to-show-more-skin competition? Their performances were mostly loud. Speaking of loud, for the first time ever, I wanted a remote to fast forward the songs.

Okay-okay, enough with the negativity. The good thing is, I laughed out loud thrice in the movie and smiled once, so that is 3.5 laughs in less than two hours. Hey, wow! A hattrick and a little more. The other dialogues were…oops, can’t remember…well, let’s just say very forgettable then - especially the preachy ones in the end.

Since I can’t seem to control my cynical attitude and have already used more gray matter to write this review than the makers used to make the movie, I shall take your leave until next time.

Thumbs up, by N K Deoshi, Apun Ka Choice : ...It is Milan’s style to tell stories in which the leading characters are compelled by their circumstances to do soul searching within.... full review

Thumbs up, by Subhash K Jha, Now Running.com : ... It doesn't flounder even once in telling its story of lives that barely criss-cross and yet come together in celebrating life at its most elemental level... full review

So-So, by Abhijit Mhamunkar, indya.com : ...Rajat Arora's script has a novel theme but the novelty wears off till the interval arrives.... full review

So-So, by Komal Mehta, Rediff : ...The movie could obviously have been made without the cricket dimension... full review

Thumbs down, by Hetal Adesara, Business of Cinema : ...Ironically, it is with Hattrick, that he seems to have scored a 'hattrick' of flops.... full review

Thumbs down, by Aprajita Anil, Express India : ...The script is so poor that the very existence of the film can be questioned.... full review

Thumbs down, by Taran Adarsh, indiainfo.com : ...The writing lacks the meat in the second hour.... full review

Thumbs down, by Naomi Datta, Times Now : ...It starts out promising to be a light entertainer, but then the entertainment dries up and the film just becomes plain silly.... full review

Thumbs down, by Nikhat Kazmi, Times of India : ... And secondly, what should have been a sweet little comedy ends up being a series of episodes that completely sidetrack the laughter track... full review

Dr. Satya and David have diametrically opposite views about cricket and so do Saby and Kash. Hemu is trying his best to become a citizen of UK. The three stories are held together by a flimsy thread of cricket.

Would you be Komal Mehta who writes for rediff?

That infamously would be me. :P

Let me assure you...all the bad things you've heard about me(if at all any) are NOT true!

:-) Thanks for stopping by.