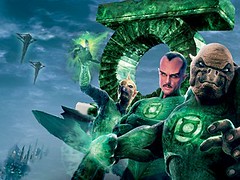 Green Lantern is your regular super-hero film. A common man realizes he has special powers and automatically rises to the occasion to save the universe from collapsing. The graphics - you’ve seen before, thanks to the number of action movies releasing on 3D over the past few months. The storyline you’ve heard before and therefore, the movie watching experience – might just lead to a bad case of déjà vu.

There are two kinds of predictability – the enjoyable-guesses kind and the don’t-need-to-hold-your-breath-what’s-the-point-anyway kind. The former can be applied to thrillers where you know the killer’s going to be the unsuspecting face around the protagonist but with enough background music, you’ll still be shocked off your socks during the climax. The latter is the worst kind – and Green Lantern, the newest superhero film adaptation, is presumptuously predictable.

Based on the famous DC comic series, Green Lantern is about a group of saviors and chosen ones with the responsibility to save the universe. The Green Lantern Corps defeated the fearful antithesis, Parallax, many years ago and imprisoned him in an abandoned sector.

He escapes, to create havoc among the universe when the strongest of all Green Lanterns, Abin Sur vows to choose his worthy successor from Planet Earth. Enter Hal Jordon (Ryan Renolds) and does he save the day? Take a wild guess.

It’s a majestic set-up; one that requires you to have read the comic before watching the film, but one of the biggest problems with Green Lantern is that it doesn’t spend time trying to explain the backdrop to the uninitiated. By this, almost half the audience sitting in the theatre hall felt isolated. The movie waltzed in as a Matrix-cum-Captain Planet hangover and, until the end credits, remains just that.

Those who have read the comics might feel differently, but any adaptation must at least spend a good amount of screen time establishing the characters and relevant contexts. Green Lantern is stylish, but nothing you haven’t seen before. The graphics are slick, Ryan Renolds looks quite super-hero like in the film, but it’s the yawn- inducing predictability of the story that makes the whole experience a dull one.

You could walk out for some popcorn and walk back to have not missed much. And that’s an anecdote attached to prime time soap operas. Director Micheal Campbell’s Casino Royale was much more stylish, slicker and engaging. While watching the film you’ll wonder how he shifted from a fast-paced, drool-worthy Bond film to a commercial, stereotypical Green Lantern.

In Green Lantern, you will find that you can’t relate to the protagonist, no matter how good he looks. The staple characters -the girlfriend, the sidekick and the bad guy from within - are all stereotypes, waiting to be overpowered by our protagonist but you don’t feel grand at his victory or frightened at the possible downfall of the world.

There are a few funny dialogues, some scenes that will make you wide-eyed but there are only so many flying objects you can take through your dim 3D glasses before a splitting headache. Green Lantern is not a bad film; it’s just not as challenging or inspiring as a super hero film should be. You would be better off buying the video game, because the film doesn’t look or emote any differently. Even better? Wait for it to premiere on Cartoon Network on a Sunday afternoon.

Nay! Thumbs Down, by stephen : Too much crap looking cgi.

Nay! Thumbs Down, by TimELiebe : Ryan Reynolds should stick to playing self-absorbed jerks in stupid rom-coms.

Too much CGI ruins another film for me and I now fear for the coming Flash movie, my favorite comic character.

stephen has given this movie a Nay! Thumbs Down(Too much crap looking cgi.). stephen has posted 1 comments and has rated 1 movies. See stephen's page for more details.