A story different from the norm gets short-changed because it is treated with a loud dose of melodrama.

The plot places Good Newwz right in the Hrishikesh Mukherjee territory. But, I will have to stop myself right there. With Akshay Kumar at the helm of affairs, it is hardly going to be about the story. Not to mention most of it is given away in the 3+ minute trailer. Since the situation itself is comical, it seems like not much time is spent in actually getting the details to be witty other than poking fun at accents and the big-town-small-town divide. Not the kind I usually find funny anyway.

I am going to count my blessings where I get them. One of them is certainly that there is a high chance that Akshay Kumar will not be sermonizing. Or is it wishful thinking? Anyway, we will know soon enough.

Good Newwz releases on 27 December 2019. There is a chance the review will be delayed by a couple of days.

Music Reviews: Biz Asia - "The album is a mix and match with a whole load of producers, lyricists, singers and musicians coming together to end the year with a banging music album." MusicPlus - "4/10"

The only thing novel about the film is the novelty of the basic premise. Neither the story nor the film has much going for it except for what we have already seen in the trailer. This is at the core of why a Good Newwz based on a comedy of errors during a goof-up in IVF treatment isn’t half as entertaining as a Vicky Donor or a Badhaai Ho, other films that deal with taboo/unspoken of topics.

It is the subtler take that is actually more problematic.

Sure, there is some above-average amount of work on the characterisation than in a typical Akshay Kumar film. The characters are not monochromatic, even if their greys take on shades that are convenient to the story, at that particular time in the plot.

Also, it is refreshing to see a film that has moved on from love and the honeymoon phase of a relationship. It even goes past the “doesn’t clean up after himself/herself” phase to take on more serious stuff. The complexities of making a marriage work. From simpler things like a common adversary puts any argument between a couple on the back-burner to the fluidity with which honesty is seen in these relationships, Good Newwz shows occasional maturity.

It also picks on some of the social nuances. Like the prying questions and taunts and unasked for advice that childless women have to face. Especially—goodness forbid—if they are working. All this while the man is enjoying his drink in the same room.

Along similar lines, the movie takes jabs at many an experience that all too common in urban life—from the commercialisation of the baby-production process to talkative cab drivers to stock photos of non-Indian people used by Indian businesses right to the reluctance of the common man to accept the objectification of women. In that vein, though, the pro-life versus pro-choice argument is skewed. 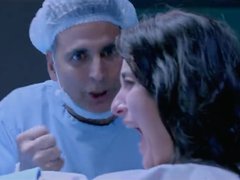 Interestingly, the wave of fitness consciousness in both urban and small-town India is touched upon. Almost like its the film’s way of keeping up with the times. I guess the next movie wanting to show-off its social awareness would slide in a comment on the Dixit diet or intermittent fasting.

Of course, Good Newwz also often takes cover under over-simplification. Like that of the small-town-big-city divide. The former are simple-minded, good-natured and garish in their taste. And the big-city folk are judgemental and unforgiving.

The overtness of this divide is clearly to induce laughter. Unfortunately, most of it is at the expense of personalities rather than situations. For instance, I don’t see why a person asking for a refund for service not provided well is funny. Similarly, I don’t see the humour when a physically underdeveloped person is made fun of. Some of this in-the-face writing feels like signalling too, like the spiel by Deepti (Kareena Kapoor) on how unfair the whole child-bearing process is to the woman—from conception to delivery.

It is the subtler take that is actually more problematic. Stereotypes such as communication resolves barriers between women but doesn’t work its charm with men seem as misplaced as any stereotype. I am not sure if it was intentional, but the privilege of the man in the child-bearing process was transparent. Clearly, the one who is interested in the process gets extra marks for doing what should be the norm. Another instance was when a doctor protects a man’s medical history from the woman who she has accidentally inseminated with the man’s sperm. And the same doctor flippantly gives away a woman’s history of miscarriages.

It is interesting that through all of this, I found neither any complaints against nor awe for the performances. That would mean they all did what they were asked to do, though I could have done without Akshay Kumar’s overacting in some bits. Fortunately, it surfaces only in some bits. Kiara Advani brought the most smiles and laughter, and I loved Kareena Kapoor’s spunk. Sure, the former seems to be just continuing with the submissive routine in her characters and the latter appears to be playing herself from real life, only brought down notches financially. Diljit Dosanjh is as adorable as a loud character like his can be.

Indeed, the performances are the main reason you are engaged for most of the two hours. As you walk out, you realise it wasn’t as satisfying an experience as it could have been.

Thumbs up, by Taran Adarsh, Bollywood Hungama : ...The soundtrack is in sync with the film.... full review

Thumbs up, by Urmimala Banerjee, Bollywood Life : ...The first half is a rib-tickling one. You will not have a single full moment.... full review

Thumbs up, by SUPARNA SHARMA, Deccan Chronicle : ...Kabhi-kabhi, under all the glitter and banality, wrapped in lots of silly, filmy situations and guffawing, Bollywood does something smart, significant and delightfully daring.... full review

Thumbs up, by Varsha Gowda, Deccan Herald : ...In other good news, ‘Good Newwz’ does not treat Deepti — embodiment of a ‘modern’ woman focused on her career — with suspicion.... full review

Thumbs up, by Madhuri V, Filmi Beat : ...the screenplay loses its sheen at few places and little more effort in the writing post interval would have raised up the entertainment quotient by several notches.... full review

Thumbs up, by Devansh Sharma, FirstPost : ...Writers Jyoti Kapoor, Rishabh Sharma, and Mehta not only know how to build a narrative with the perfect pace and precision but also pen some hilariously witty lines for the characters.... full review

Thumbs up, by Shubha Shetty Saha, Free Press Journal : ...Apart from looking gorgeous, Kareena who has the strongest character in the film, is fabulous.... full review

Thumbs up, by Chaitanya Karthik, fullhyd.com : ...One of the issues with the film is its stubborn insistence on explaining and simplifying everything.... full review

Thumbs up, by Vishal Verma, Glamsham.com : ...Akshay Kumar delivers the joy of the year with this wholesome entertainer that can be watched with your family again and again.... full review

Thumbs up, by Manjusha Radhakrishnan, Gulf News : ...But you shouldn’t abort the idea of watching the film based on those tiny bumps.... full review

Thumbs up, by Nairita Mukherje, india today : ...But what truly worked in the film's favour is the content.... full review

Thumbs up, by R.M. VIJAYAKAR, India West : ...The film’s consistent note of humor, with a bit of needed satire, and the whole ambience with the crisp length of 133 minutes makes it a perfect family entertainer despite the obviously passion- or humor-filled lines that are rather bold for conservative Indian audiences, but not unpalatably so.... full review

Thumbs up, by Shubhra Gupta, indian express : ...Good to see Akshay Kumar a) not being a flag-waving-nationalist-patriot b) owning up to grey-stubble-on-chin, and c) reminding us just how funny he can be.... full review

Thumbs up, by Ambica Sachin, Khaleej Times : ...But it's Diljit who undoubtedly steals the scene with his boisterous act.... full review

Thumbs up, by Akash Mirchandani, Kia Gia : ...It all culminates in an emotional climax, which makes this multi-starrer, with a bold theme, a winning affair!... full review

Thumbs up, by Umesh Punwani, koimoi : ...a pain-in-your-stomach laugh riot from the word go... full review

Thumbs up, by Pankhurie Mulasi, Movie Talkies : ...Diljit Dosanjh is a natural and he makes you laugh out loud every time he comes on screen.... full review

Thumbs up, by Joginder Tuteja, Planet Bollywood : ...Later, when Diljit Dosanjh and Kiara Advani arrive on the scene, the ‘sur’ of the film becomes a bit ‘desi’ and it takes a little time to adjust from cool to rustic here.... full review

Thumbs up, by Nandini Ramnath, Scroll.in : ...Good Newwz is orthodox about the necessity of childbearing (compared to a blessing from above) and abortion (treated on par with murder), but also speaks up for the right of women to bear children no matter who the father is.... full review

Thumbs up, by Vinayak Chakravorty, Sify Movies : ...The film picks a contemporary urban story with characters that will appeal to modern mindsets, and crafts a conventional entertainer out of it without resorting to cliches.... full review

Thumbs up, by Priyanka Roy, The Telegraph : ...Good Newwz doesn’t really come off as offensive, save for one stinky sequence that involves a pregnant woman farting.... full review

Thumbs up, by Sreeparna Sengupta, Times of India : ...And some of the jokes seem off-colour. There’s also a tendency to over explain and simplify in some portions which stick out.... full review

So-So, by Bobby Sing, Bobby Talks Cinema.com : ...It feels like we are being asked to overlook these real-life concerns because it's a comedy after all.... full review

So-So, by Deepa Gahlot, cinemaah : ...When this class war runs out of steam too, there is another turn to melodrama, which simply extends the film’s running time without adding much to the already existing turmoil.... full review

So-So, by Devesh Sharma, Filmfare : ...It feels like we are being asked to overlook these real-life concerns because it's a comedy after all.... full review

So-So, by Kunal Guha, Mumbai Mirror : ...But the going gets painfully contrived when someone pronouncing sperm as ‘spam’ and flush as ‘flash’ is tasked with delivering the laughs.... full review

So-So, by Priyanka Sinha Jha, News18.com : ...The newbie director, Raj Mehta, however, does well in keeping the film short and succinct, switching scenes before things get monotony sets in.... full review

So-So, by SREEHARI NAIR, Rediff : ...In a film where everyone else alternates between parading their comic chops and trying to knock you down with the force of their sentimental acting, Kareena’s is a performance of more than just surface pleasures.... full review

Thumbs down, by Subhash K Jha, Bolly Spice : ...I would go as far as to say Akshay Kumar plays Karan Johar, IVF baby and all.... full review

Thumbs down, by Rahul Desai, Film Companion : ...In its attempt to tackle the misconceptions of artificial conception, the film ends up reiterating the divides defined by social artificiality, elitism and classism.... full review

Thumbs down, by Saibal Chatterjee, NDTV : ...Akshay, shedding his patriotic change agent garb for once, makes the most of the bearable lightness of the plot.... full review

Thumbs down, by Namrata Joshi, The Hindu : ...The film tries hard to balance itself between the progressive and the conservative and is not able to be either.... full review