David Fincher's latest, an adaptation of Gillian Flynn's racy novel Gone Girl, has enough thrills to keep you glued to the screen for all of its run time. Read the book first, though, if you truly want to glean all you can from both forms in which this complex relationship between a man and a woman is explored.

Gillian Flynn's novel Gone Girl is a terrific piece of pop-lit; a racy thriller that forms the setting for some audacious characters and great insights into people and relationships. Although narrated completely in first person, it always had the trappings of a film in it - a film that would truly take some making.

Some of David Fincher's most popular films were adapted from novels, and he has a penchant for making films that outshone their books. The expectations for Gone Girl, naturally, were through the roof. What we get is a mixed bag - while the film is a neat little thriller when viewed as a standalone entity, it does rob you of many, many gob smacking moments that the book offers you.

A man comes home one day to discover that his wife is missing. Naturally, the needle of suspicion is on him. As he battles the cops and public perception to prove his innocence, we slowly see the story of the couple unravel. 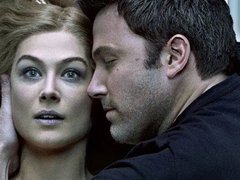 Gone Girl draws you in from go. Hope seems sucked out right from the first frame of the film, as Nick Dunne goes on to lose his wife. Ben Affleck suits the character beautifully; we alternate between his outer personality - a product of his upbringing - and his inner despair, as things begin to go south for him rather quickly.

Then, there's Amy, who we get to know early on through her diary entries. Rosamund Pike looks a lot like one would expect her to look. But somewhere, it seems like the essence of her character is lost. We get to see what Amy does, but we hardly get to know what she feels.

In fact, what seems to be sorely lacking from the film is a deeper understanding into the relationship between Nick and Amy. What made their fairytale romance so special, and then what went wrong? The answer, of course, lies in the two characters, but it's a pity that we hardly ever get to see them together on screen. Any relationship goes through the test of time, and to truly justify why Amy disappeared, it would have worked infinitely better for the film if we got to see more of what made Nick and Amy tick, and what didn't.

There are David Fincher's deft little touches, though, which add beautiful little layers to the film - watch out, for instance, for the accessories that embellish Amy's pencils while writing her diary at various points. Trent Reznor and Atticus Ross's dissonant music score is another facet that aids the film's overall sense of unease and discomfort.

Here in India, the censor board has ensured that the film is that wee bit more annoying to watch, because of a strange pan-and-zoom method that has been used to mask some of the violent or sexually explicit content - essentially, the image blows up and shifts to the least offensive part of the frame in an awkward manner, ruining much of the experience.

Gone Girl still makes for a gripping watch - for the mysteriously unfolding tale, for the cast that largely suits the characters, and for some genuine insight into the complexities of human thought. However, for a truly enriching experience, I strongly suggest you read the book before watching the film.

Can't help but agree on the point about their relationship. Also, i was kinda disappointed as to why Fincher needed Amy to 'narrate' the events leading to the disappearance and beyond. Voice over is always the easy way out isn't it?

Haven't read the book, but am guessing that it would be a much much better experience.

Nikhil S has given this movie a So-So. Nikhil S has posted 1 comments and has rated 1 movies. See Nikhil S's page for more details.
Shrabana

Actually I think people who have NOT read the book will enjoy the film more... because what the film also missed (understandably) is the complexity of perspectives- Nick as he sees himself, as Amy sees him, as the world sees him... and same for Amy- also Rosamund Pike became somewhat a unidimensional Amy... not taking away from the film though- it managed to capture the overall um... let's say... feel of 'Gone Girl' quite nicely....