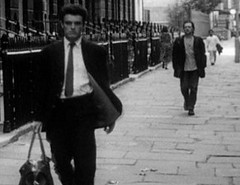 When was the last time you let your imaginative demons get the better of you and felt absolutely wonderful about it? Following allows you that liberty while letting you bask in the visual genius that the film is. It’s a maze – a complicated maze revealing much about the plight of a writer “between jobs” and the warped people he meets. It’s a film revolving around voyeurism, how personally you want to know random people and how that very trait can get you into trouble.

In a way, watching a movie falls under a voyeuristic activity. You break into a fictitious character’s life/head and watch them as they unfold as per their logic and then pass your opinion on how the events play out. This experience is not different from Nolan’s first semi-feature length film Following.

Released before Memento, Following has the same amount of genius as any of his other films, yet for some reason remains rare. Maybe in that lies the charm of the film.

The movie surrounds Bill (Jeremy Theobald) who is obsessed with following people but never really interacts with them. He meets Cobb (Alex Haw) who not only follows people but also breaks into their homes and tries to understand their personal lives.

It’s a familiar labyrinthine structure, but not a predictable one. While following Cobb around, Bill meets a fascinating woman (Lucy Russel) and through intercutting, non-linear narratives and flashbacks you’ll be left with only guesses and calculations about the climax of the film.

The calculations are not like mental math though – it’ll be like a stimulating lavender bath where your mind will spurn out conclusions and permutations automatically, and your body will be transported into the head of the lead character before you even realize it.

If you loved Memento, The Prestige or Inception, Following has a similar pattern but it’s so strong in it’s premise and treatment it only reminds you in bits that you’re watching a Nolan film.

He’s used a typical non-linear structure, his protagonist is edgy and the background score is hauntingly merging but every now and then you feel you’ve slipped back in time, into a Noir crime film with low-key/split lighting and ruptured camera movements. In all this confusion, Following lets you sit back and enjoy the fall of time, genre and logic.

The film was shot on almost a negligible budget, so when you pick the DVD without any special features you’re curious to know how it was managed. It could have been even more interesting to have a featurette or even an interview with Nolan about his vision of the film culminated into Following.

Following is like a rugged, black and white poster that has come to life for 70 mins. It stuns you, in a post-modern way and leaves you confused. You can’t just watch it. You’ll have to become a stalker, and compulsively follow the visuals. The movie demands it.

Yay! Thumbs Up, by Pondy

In each of his movie, Nolan puts the viewer into the mind of the actor, be it Following, Memento, Insomnia. It makes the viewer suffer what his character does. There lies his genius. If memento had been told in linear time and not 15 min slices, would it be the work of genius it is? Same with the handycam in following and the gradual overexposure in Insomnia. Reminds me of 12 Angry men, where you are made to feel you ARE in the room yourself.

Pondy has given this movie a Yay! Thumbs Up. Pondy has posted 2 comments and has rated 2 movies. See Pondy's page for more details.
Swetha Ramakrishnan

@ Pondy I have a friend who re-edited Memento and made it linear to find out from his colleagues what they thought of a linear Memento. Not many liked it :-) Just saying!

But yeah, that's why I feel Nolan has a standard structure in all his films, and even though he's used the same in Following, because it's his first semi-feature you can see a new, fresh passion brimming in the film. It's delightfully exciting :-)